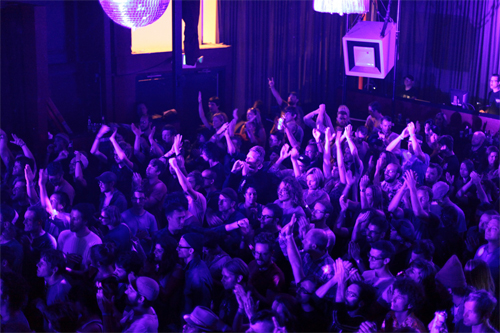 And just like that, it’s over. Why does it feel like time speeds up during the end? And why is going back home always faster than away? The last few days of [any] festival are always a challenge. Being physically and aurally overwhelmed by a sonic fatigue, my mind clutches on a few bits of memory to capture each instance. I know that I’m exhausted, because even on a five-hour flight home from Seattle to New York, I don’t listen to music, and drift in an upright position through moments and space. The remaining fragments of recollection flash out-of-order in time, and Nils Frahm is forever bowing on the stage to a standing ovation, and the applause never ends.

Time floats backwards, and now Frahm is gliding across the keyboard, slamming the keys in a vigor and grace. The music fills the hall and the audience is silent. The notes fleet and flutter around the room, then glide to Frahm’s fingers and into his heart. Being in the presence of a true master is intoxicating – his aura and energy reverberating in sync with each cell of your body. I’ve watched Nils play before in New York, and must say that every performance is magical, filled with compassion, beauty and poise. The instrument is more than a tool to produce gorgeous sound, but an extension of this composer, who we have the pleasure of watching perform. By all means, if you glimpse an opportunity of attending an upcoming performance by Nils Frahm, make sure you secure it with all of your might. You will not regret it! Until then, check out this Interview with Nils Frahm. 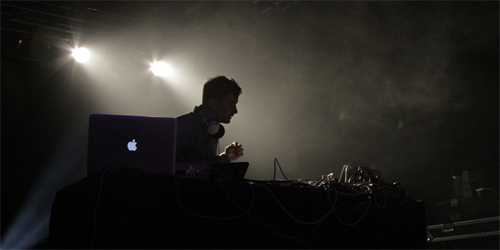 Rewind back a few hours, and I’m drinking a beer outdoors by the park. It’s Saturday afternoon and the dB DO-OVER is dropping the beats on a picnicking crowd, children and grass. The sun is smiling, and somewhere around my second alcoholic beverage I remember that I failed to eat. The days, nights and evenings blur into one, exchanging positions with sleep in between, while every split second is ticking away. Ah, but a few hours prior I finally meet Sofia and Robert from Erased Tapes Records, and receive some fantastic news about their (and Frahm’s) upcoming relocation to New York. And even though I just met this wonderful couple, it feels like I am in a presence of friends that I’ve known for a while – a sharp contrast from my earlier feeling same morning, when in a room full of people I felt all alone. And so it goes…

Flash forward in time, and I’m in the cab with my dear friend Paul, on the way to the Showbox for a Ghostly International Showcase performance by Tycho, Lusine and Matthew Dear. When we arrive to the club, a glimpse of my press pass lets me cut through the line, and I inch my way forward to the stage only to learn that I’m at the ‘wrong’ Showbox, and Eprom is spinning his tunes. Ah, but the crowd loves it, and so do I. I curse at the cab driver, but merge with the mass and move with the rhythm. Letting the issness unfold as it is. I warm up just in time for Bonobo to take the stage and lay down his vibe. It’s silky and smooth, and although I recognize each track, I’m more in the mood for uptempo. I catch a cab back to the Capitol Hill, and guide it to Neumos where Roman Flugel is half way into his set. And damn it, I’m going to miss Sepalcure! And the disappointment returns once again.

My night ends with a two-hour set by Max Cooper. I dance through his set a few feet from the speaker, the kick drum vibrating my larynx and lungs. At some point I crawl into another cab, my hand slamming the door then my head slugging the pillow, drowning in the torn up remains of the festival’s day. And while Seattle continues to dance in a seemingly limitless chain of impromptu after parties, I drift through that dreamless and mind-crippling void. 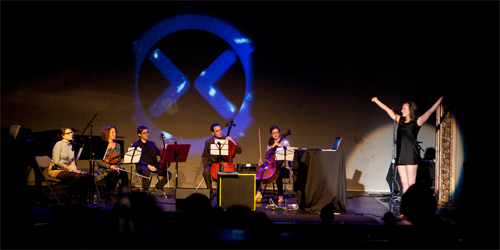 Sunday morning starts in the afternoon. My memory in shingles, and my mind in a haze. Hours slip by, and now it’s evening. Once again, like the very first day, I find myself sitting at The Triple Door, sipping on wine, melting into a chair, and loscil is playing on the stage with Kelly Wise behind a piano. Frequencies conceal all further planning and thought, as they slowly course from the speakers and mix with my drink. Distinct piano notes jitter a recall, and I think I recognize a tune, but it’s quickly gone, and I’m left with a linen of sound. Scott Morgan’s work has been very impressive in the last couple of years, and I’m extremely happy with the direction he’s taking. Just the other day I learned of an upcoming collaboration album between loscil and bvdub (to come out on Italian Glacial Movements label), and I’m already drooling with thirst for this heavenly cocktail. Be sure to check out Headphone Commute’s Interview with loscil, regarding his latest release on Kranky, Sketches From New Brighton.

Christina Vantzou finally appears on the stage. I say ‘finally’, because during the second and fourth Optical showcases she was responsible for the visuals, accompanying performances by Julianna Barwick and Sylvain Chauveau. It was time for Vantzou to perform herself, along with the Arial Lakes Ensemble, a 45-minute composition accompanying her own same-titled film, Nº 1. I actually managed to witness a world premiere of Nº 1 back in January in Brooklyn, when Christina sat right next to me during the audio/visual experience. During the screening I kept thinking about what Christina may be thinking, as she was watching the unfolding of her film unto a newly consuming audience. She must be thinking about what I am thinking, I suspected, and then I closed that never-ending loop. Back at The Triple Door, the slow-moving strings swing in major chords, as my consciousness swings in a daze. For more on the album, read Headphone Commute’s Interview with Christina Vantzou here. 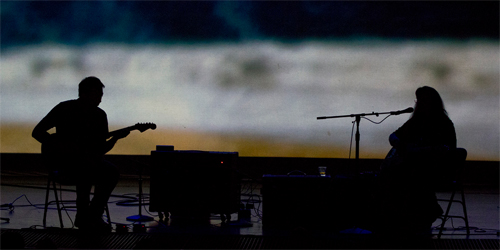 The showcase, and indeed my own experience of the five-day festival, ends with the very last performance from Michigan based “space-rock luminaries”, Windy & Carl. The husband-and-wife duo have been consistently composing atmospheric ambiance since 1992. Having not toured in a while, Windy & Carl selected Decibel as their emotional exit from the stage (but not necessarily their studio). The performance retained the intimate signature sound with which the duo captured their fan base on multiple Kranky releases, most notable of which [for me] are Songs For The Broken Hearted (2008), and the most recent We Will Always Be (2012). The evening closes with this lullaby set, and I am left with a small window of opportunity to sneak out of the venue without saying goodbye. I never say “goodbye“. I only whisper, “see you later…”