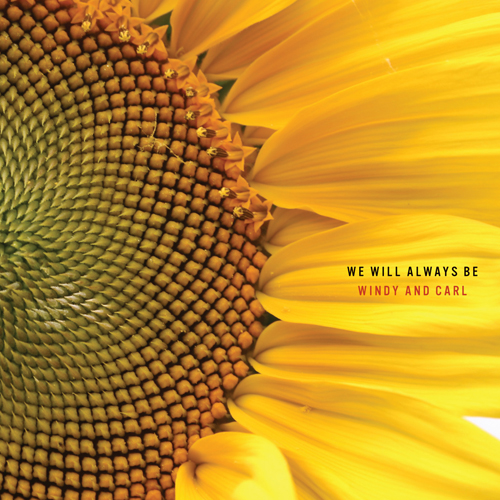 There is some music that I save for the night, and then there’s some that I leave for the morning. Windy And Carl‘s latest album, We Will Always Be, is one of the latter. Waking up to a beautiful weekend ahead, I brew up some green tea, open my window blinds and wait for the sunrise. Half way through the album, somewhere around “The Forst in Winter”, the sun’s early glimmer spills over the buildings into my studio. Even the cover of this release features a sunflower… so I know I’m in the right place…

Composing music since 1993, Windy Weber and Carl Hultgren are a husband-and-wife duo from Dearborn, Michigan, where they run their own music store, Stormy Records. Their recordings began appearing on the Chicago-based Kranky in 1995, with The Dream House / Dedications To Flea split, following up with releases on Darla, Music Fellowship, and their very own, Blue Flea. I last heard from the duo back in 2008, with their collection, Songs For The Broken Hearted.

Windy and Carl’s newest recording in more than three years is a much brighter affair. Gone are the somber drones reflecting on life, love  and loss. Instead, gentle ambiance uplifts the listener towards the soaring heights. The sound glides towards the sky, where spreading its wings it sails on the warm wind, sunlight and breeze. Strumming guitar gently washes over the synth chords with its reverbed tremolo. Mellow pads break on the beach as the ocean stretches from sleep. Windy’s softly effected voice swirls far beneath the surface. We Will Always Be surmounts the duo’s previous work with the near nineteen minute final track, “Fainting in the Presence of the Lord” – this last title hinting at awakening, spirituality, and being.

“life is short. sometimes things you think are gonna last forever don’t, and some things you aren’t sure about end up lasting. what have we discovered? that things are not always hard, and remembering what we really wanted and who we really are means very simple things. for me, it is that i love music to no end, and i love to hear carl play the guitar more than just about anything else in this world. i play to hear him play. it’s that simple.”
— Windy’s entry on brainwashed.

In 2008, Windy released a solo album, I Hate People, on Kenedik and Blue Flea. Carl was supposed to make a solo record as well. Instead he spent 18 months in a studio and presented an album to Windy, for her ears only. This gift culminated into an album that we are grateful the couple has shared with us. A beautiful celebration of ever lasting love.