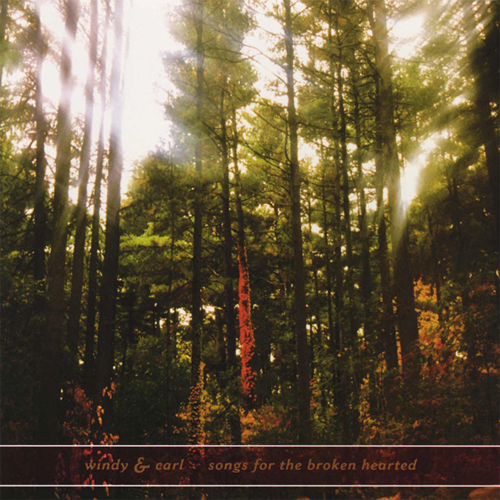 Windy Weber & Carl Hultgren have been releasing minimal ambient and experimental post-rock music since the late 90’s. The catalog of this Michigan based husband-and-wife duo spans an eclectic selection of notable labels such as Icon, Ochre, Darla, Brainwashed, and of course, Chicago-based Kranky Records. Songs For The Broken Hearted is Windy & Carl‘s fourth release on Kranky (being signed to the label for over a decade now), where it perfectly fits among the works by their fellow label-mates, Stars of the Lid, Pan•American, Tim Hecker, and Brian McBride.

The tracks on Songs For The Broken Hearted continue to build on the duo’s style of beatless shoegaze, layers of Carl’s guitar work, using EBow and a variety of time-based delays, with the occasional soft vocals by Windy. Both play equal amounts of guitar on the record, and Windy tells me that “each track (with the exception of Rhodes) was created spontaneously with us both playing guitar, and then carl added a few extra layers after and i added the vocals”. The sound of this album is still drony, but a lot more harmonic, as if a heavy pillow was left on the Rhodes, pressing on all the right keys. The cover art of the album pictures a forest with breaking light. A parallel could be drawn between this image and the dense stratum of sonic frequencies evoked by the guitar, with an occasional breakthrough of clearly EQed voice, which almost whispers the songs that lullaby the sad, and indeed the brokenhearted.

To understand the depth of feelings behind this work, it helps to bypass my interpretations, and instead quote Windy talking about the album on the band’s web site:

“this is an album about love. everyone has known love, and everyone has known loss. love is not just about warm fuzzy feelings, although that would be the part people say they like the best. and in any span of time, love changes and means different things to different people. […] songs for the broken hearted is an album full of honesty, both musically and lyrically. it is for anyone who has felt love – you can hear it in the sounds and the words, both spoken and unspoken. the album i never thought would be is finished.”

For an extensive selection of Windy & Carl’s tracks, check out their triple disk release, Introspection (Blue Flea, 2002). A few other great recommendations from the duo include Depths (Kranky, 1998),  Consiousness (Kranky, 2001), and a compilation of two EPs, The Dreamhouse / Dedications to Flea (Kranky, 2005) – the latter being a sad elegy dedicated to their departed dog, Flea. Recommended for the above mentioned Kranky roster. Windy & Carl are currently preparing for their spring tour along with  Benoît Pioulard with some special treats from Lambs Laughter (Windy and Thomas Meluch). For tour tour dates and details check their website or myspazz.