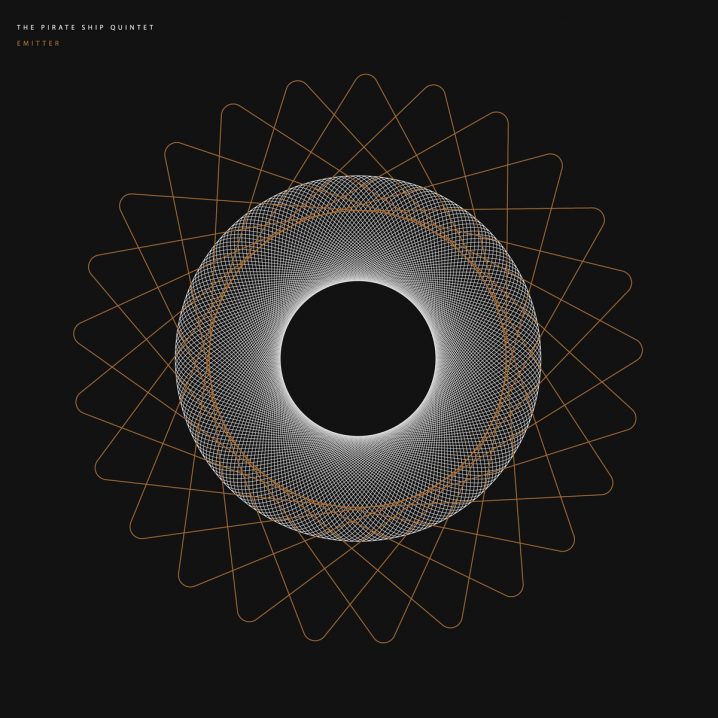 Back in the golden days of The Silent Ballet site, which has become so fragile that it may possibly be even extinct, I used to get my weekly dose of shoegaze and post-rock from its wonderful selection of recommendations. Alas, I’m not as prolific as I used to be a decade ago, and keeping up with Jordan’s selections has become a chore in itself. Leave it to the beloved Denovali then to surprise me with its roster and release catalogue on which The Pirate Ship Quintet appears once again! I first discovered this Bristol (UK) based band back in 2007 with their self-titled three-track EP [which I still love and rotate on vinyl!] and so I am excited to learn of the group’s return after a seven-year hiatus with Emitter.

All of my favourite elements of the genre (and the band) are back in this gorgeous nine-piece album! The peaks and valleys of the dynamic flow, the cinematic landscapes that open up and sprawl beneath you when you’re soaring off the mountains until your glide turns into a hawkish charge. The weeping violins sing, oh, so nicely, with the strumming of the acoustic guitar and the choral backings of its lamentable parade. I love the change in pressure and intensity released by the distortion of guitars, the forlorn bass and the explosive drums. The music rises and subsides as if in sync with all my daily troubles, matching the weather, matching the mood, matching the building storm inside my head. I feel there is a theme, and so I ask Jonathan Sturgess to share on the process:

We don’t really write around themes. It might just be that we are natural cynics but I think it often feels disingenuous when people talk about the thematic approach they’ve taken to making a record. Our process is much more about investigating and experimenting with the mechanics of music and the emotive result. We like playing with hints of discordance, loosening rhythm, the odd pairing of movements and parts, that kind of thing. Ultimately what we make always seems to be dark and sad. I think we probably all have mummy issues or something.

The album showcases a number of collaborators, which include Emily Hall (of Bedroom Community) on the vocals, along with the award-winning singer-songwriter Emily Barker and Blythe Pepino. The band’s gorgeous cello playing is delivered by the band’s very own Sandy Bartai, who also plays for the London Symphony Orchestra and BBC National Orchestra. Additional appearances include the jazzy saxophone mournings by Andrew Hayes. The execution of the music is flawless, demonstrating the band’s ability to produce and play as a single unit – something I would be excited to witness performed live. Highly recommended for fans of MONO, Yindi Halda, Daturah, Beware of Safety, and Blueneck. If there is one post-rock album you plan on listening to this year, make sure it’s Emitter!