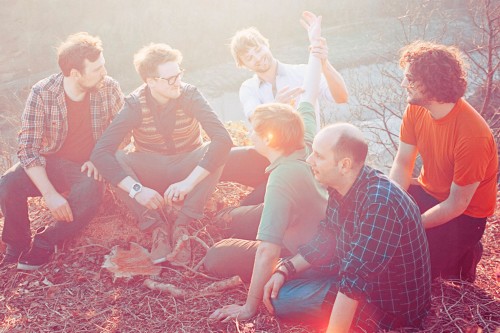 [note: all questions are answered by Ziapour (Zee) on behalf of the group]

From the title of the album, “Rope for No-Hopers” to the name of the first track “You’re Next’ – it sounds like the album is off to a gloomy start. How did you come up with the titles of the album and the tracks?
Whilst we’re aware that the album title can easily be read as a quite gloomy one, we’ve also found people for whom it evokes a much more hopeful feeling, images of people being hoisted out of the ocean for example. We’re keen on that kind of stark double-meaning, it seems to fit nicely with the sort of music you find on the record – mostly instrumental and therefore thematically and emotionally open to interpretation. For the title, whilst it’s usually either interpreted as suggesting melancholy and suicide or hope and salvation, both readings ultimately represent escape.

As for the track titles themselves, the main thing we always aim for with these is simply to avoid as best we can the type of florid titles that seem to have become something of a cliché for post-rock music. We tend to be drawn much more towards simple, surreal or odd-sounding names. Again, a great thing with this approach is that the titles can easily mean different things to different people, but we do often name tracks after in-jokes or ideas within the band. For example ‘That Girl I Used To Live In’ is named after our trumpeter Moo drunkenly misspeaking whilst trying to tell us a story about an old housemate of his. From this title we wrote lyrics about somebody being literally trapped inside the torso of a giant woman and having to cut their way free.

‘Dennis Many Times’ is named after a mouse who we’d often see scurrying around a studio we used to have in the basement of an old fire station in Bristol. We named him ‘Dennis’ after the fire engine manufacturer. ‘Horse Manifesto’ comes from a day we spent making signs in order to picket and protest against the potential danger of an equine government (Horses + Power = Dead Babies!). As well as some photos, that day also gave us the track title and some ideas for lyrics. These are about an imagined horse uprising against humanity, seeking violent retribution for generations of oppression and exploitation.

Is there a central theme surrounding the images evoked by the music?
I suppose there isn’t really a central theme as such, outside of the kinds of titles we like to choose for the tracks, although none of those are related to one another conceptually. I think if people feel that the album has a kind of central consistency and atmosphere that’s probably more to do with how we have written the music itself, as we’re all very self-critical and fussy about the sounds and parts that we’re using.

How did you guys meet and establish The Pirate Ship Quintet?
Alex (guitar) and Jona (drums) are old childhood friends and used to play in a band together called ‘We Were Nice Today’ in Bristol. They both moved to the south coast to study and decided to form a new band – then just called Pirate Ship. Over the next few years the band went through a number of different configurations and, at some point and for some reason (none of us can remember exactly when or why) the name was changed to The Pirate Ship Quintet.

You’ve been away from the scene for over five years. What inspired you to get back together and record another album?
We never really wanted to take so long, but it was very difficult for us to get together regularly and play together, let alone write or record anything effectively. This was due to a number of reasons, most of them boring and to do with people living so far apart. There have been other pressures as well, important adult stuff like having jobs and families and things. Eventually though, despite those things, we managed to reach a point where we were all living fairly close together, in and around Bristol, as well as keeping hold of a little studio space in town which has been incredibly helpful. During that downtime we did occasionally get together and play but it was just for the pleasure of playing music together rather than to seriously write anything. They were quite dark times for the band actually, we weren’t sure if we’d ever get to release another record or even be a real band again, so we’re all super happy that we’ve finally managed to finish the record, get it released through a good label and play some shows abroad.

Describe the process of recording the pieces for “Rope for No-Hopers”.
The first thing to note with this is that we do everything ourselves on whatever bits of old gear we’ve managed to get our hands on over the years. We’ve never been recorded in a proper studio or anything like that. One reason is because we can’t afford it, but another reason is that we wouldn’t have enough time to work in the way we want to. When we’re recording we tend to be also using that time to work into and refine the tracks. Riffs are rewritten, parts are added, whole sections are sometimes dropped entirely. This is a lengthy but important process for us, and we simply wouldn’t be able to afford this kind of time in a recording studio.

One downside of this is that we need to find spaces to set up and record in and this has resulted in us using quite a few different locations for recording this record. These have included an old fire station basement, a church hall by the river, magazine offices, people’s apartments, a woodworking studio and, finally, our little studio space we’re still renting in Bristol. This kind of process has downsides though – using old gear we’ve been able to borrow or find on the cheap means lots of it fails. Our studio is full of broken mixers, audio interfaces and microphones. We’ve had three separate computers blow up, taking hours worth of demos and other work with them. I guess it’s all part of the fun and, though frustrating at times, at the end of this process I think we end up with a better record than we would have done otherwise.

In terms of the actual writing of the songs, it’s very much a collaborative effort. Generally songs start with an idea for a riff, most often these will be brought along by one of the guitarists, but then we all work on them together, suggesting parts for one another and discussing track structure. This happens all the way up to mastering and would probably keep happening forever if we didn’t have a deadline that we had to stop by. Again, we’re quite fussy and critical about this stuff and will often discard ideas, whole tracks or sections, sometimes at a pretty late stage of recording.

I would love to see your show live. You think you’ll be ever traveling around US?
We’d absolutely love to do an American tour. We recently just got back off of a short tour around Europe which was a lot of fun, but at this moment in time I’m not sure we’re quite famous and/or rich enough to be able to cover the expenses of coming all the way to the US, sorry man. One for the future hopefully!

What’s next for The Pirate Ship Quintet?
The next big thing we’ve got coming up is playing the Denovali Swingfest this year in Germany, which we’re really excited about. There’s some great bands we’re looking forward to seeing there as well like Heirs, Murcof, A Winged Victory For The Sullen, Blueneck, Bersarin Quartett, etc. Beyond that we’re hoping to keep playing shows including organising another tour for next year. Long term, we have actually started writing new material and are determined to keep the momentum going this time and not take another five years to release another record.