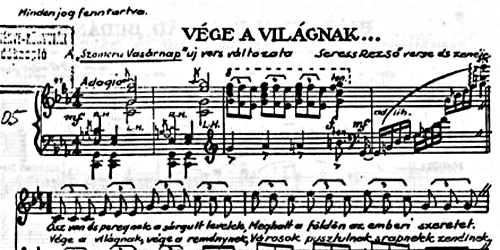 Today, I’m trying something new… An in-depth reflection on one specific track (song), and some of its incarnations through the years through variety of covers. And what better way to kick this one off than with a one titled Gloomy Sunday… Read on, and make sure to hit [play] along the way on the embedded tracks…

Although I officially became familiar with this tune after giving an in-depth review of Venetian Snares‘ Rossz Csillag Allat Született (Planet Mu, 2005), I actually have heard one of its original renditions at the beginning of Steven Spielberg‘s Schindler’s List. There were, of course, many other covers, including one by Björk, and even by Christina Ricci in the film The Man Who Cried. But of course, one of the most famous renditions, the same one sampled by Aaron Funk, is the one by Billie Holiday, recorded in 1941. This original recording, because of its content, was actually banned by the BBC until the turn of the last century!

A little about the song… Gloomy Sunday was composed by a Hungarian pianist, Rezső Seress in 1933. There are actually two sets of lyrics. One, the original by Seress’, depicts Hunary during first world war, titled Vége a világnak. The other, titled Szomorú vasárnap with lyrics by László Jávor, translates to “Sad Sunday” and is “mourning to a lost lover and a pledge to commit suicide to meet said lover again in the afterlife”. Of course, the same song exists in English, German, Spanish, French, Russian, Finnish, Swedish, Italian, Greek, and yes, even Chinese, Japanese, and Vietnamese!

Another, absolutely stunning cover, is by the one and only Kronos Quartet. Yes, the same one that performed Clint Mansell‘s score to Darren Aronofsky‘s Requiem For A Dream. The quartet has also some fantastic releases on its home label, Nonesuch: Terry Riley: The Cusp of Magic (2008), and Floodplain (2009). This track is taken off their 1986 release, Caravan:

Sarah Brightman, the English classical crossover soprano, yes the same one who performed at the Beijing Olympics and captivated the world with her beautiful voice, took a stab at the song, and absolutely nailed it with her smooth, velvety, voice:

Now wait just a second!!! Here comes Sinéad O’Connor! This cover is taken from her third full length album, Am I Not Your Girl? released by Chrysalis in 1992. It’s beautiful!

I don’t even know which version I like better!!! They’re both so good, yet different… Or am I completely out of my element here? I’m not sure… Yet here’s another cover, with that Portishead-like trip-hop feel, from Bermudian singer, Heather Nova. This is a music video of the track that appears on her 2001 release, South.

Oi! I’m exhausted! I’ll leave you with this final classic by Venetian Snares… Hope you enjoyed this little distraction… Leave me your feedback – I’m really curious to hear what you think of all this!