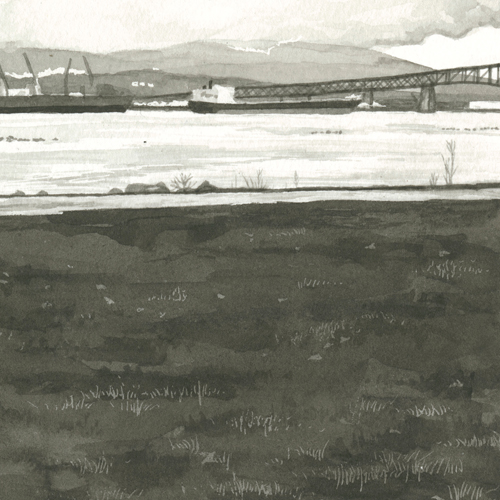 Sometime around 2010, Scott Morgan dove even deeper into a territory of his minimal ambient sound. Morgan has been releasing on Chicago based Kranky since 2001, when he published his debut, Triple Point, as loscil. A year later he followed up with Submers, then First Narrows in 2004, and Plume in 2006. But it is the above mentioned (and very welcomed) slow descent in 2010’s Endless Falls that really got me addicted. It was this meditative, almost trance-inducing landscape, with deep lows and white noise highs, that had me lost in a world of loscil. With a slight nod to environmental isolationist ambient, Morgan continued to explore this new direction in a beautiful 2011 release for Glacial Movements, titled Coast/ Range/ Arc. And it is with his even more refined sound and top-notch production that Morgan returns to Kranky, with this very latest, Sketches From New Brighton.

It is easy to drown in oscillating waves of delayed minor chords, pulsating vibrations, and microscopic rhythms. To appreciate the expanse of covered frequencies, one should be equipped with a nice pair of headphones (especially if your neighbor has been complaining about the sub lately). In this acoustically rich ocean of sound, one may want to take the time to slowly submerge to the depths of wet atmospheric nadirs. With a title like Sketches From New Brighton, Morgan gives us a reference point of a geographic location in Canada’s British Columbia, in his hometown of Vancouver. The title tracks refer to a scenery overlooking a shipping port, drafting sketches around “Prairie Trains”, “Cascadia Terminal”, and “Container Ships”. Regarding this particular concept album, Morgan explains further:

“This album gets its name from an odd little ocean side park that borders industry and the Vancouver port authority and lays claim to being the birthplace of the city. In a way, Sketches from New Brighton is a continuation of a dialogue with my environment that started with First Narrows (kranky 2004) and continued with the Strathcona Variations EP (Ghostly International 2009). It is not a rigorous ‘study’ per se, but more a series of sketches, loose interpretations of the spaces I inhabit as well as an acknowledgement of their influence on my practice. These are my impressions, a kind of sketch of New Brighton and the surrounding area in an abstract form.”

But one does not need to be engulfed in a structured meaning encompassing this body of work. Stripping away the concepts defined by the artist leaves the music free, soaring all on its own, moving in swells of flooding sound, sunk ambient pads, and vast sonic soundscapes. With this latest addition to his catalog, Morgan once again reassures his lauded presence in the dub ambient electronic music community. It’s no wonder that Seattle’s Decibel Festival is featuring his live performance at the OPTICAL 5: Undercurrent showcase, along with his Kranky label mates: Windy and Carl, lissom, and Christina Vantzou. If you’re lucky enough to be at the festival, I highly recommend you witness this performance. You know I’ll be there…

Be sure to also check out this Interview with Loscil