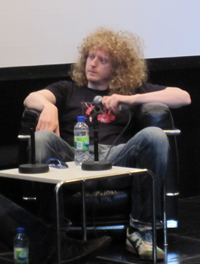 Once again, the day began with workshops, panels and intimate discussions. While Nathan Fake played an outdoor wireless set at Place de la Paix, The Wire interviewed The Caretaker (photo on the left). This was a fun conversation where James Leyland Kirby talked about his past pranks as V/Vm, his laid back attitude, obsession with alcohol and women, and the importance of living in the moment and occasionally reflect on past memories. We also learned that his alias came from the character in Kubrick’s film “The Shining“. Good stuff.

A panel discussion with Pimmon, Ben Frost, Tim Hecker and Carl Michael von Hausswolff centered around the physicality of sound, conversation of a performer with the space through music, and the delivery of unpredictable decibel levels vs. the controlled production of a studio album. This was one of the most interesting panels I have ever attended! Unfortunately I missed the Q&A session with Mouse on Mars, but you can’t attend them all… 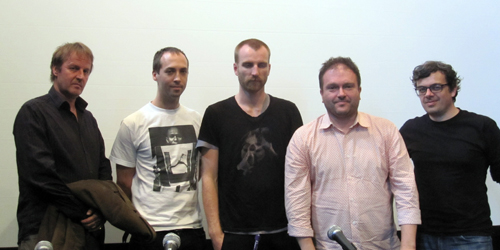 With the tight schedule of events, my personal errands, artist interviews, and basic dietary nourishment, I couldn’t make it to the third Expérience installment. But I ran back to Monument-National just in time for another A/Visions showcase, subtitled Sublime Distortion. Montreal’s Thierry Gauthier used “acoustic and electronic sound sources to build a series of audio-visual, non-narrative, [and] abstract animations”. His sound was beautiful, minimal and soothing, and I melted in my chair, at times closing my eyes to absorb the music as is, without distraction of visual input. The performance of Nord/Sud left me relaxed after a day of information intake, just in time for Marsen Jules Trio to take the stage.

Twin brothers, Anwar and Jan Phillip Alam, on the end sides of the stage, as VJ Nicolai Konstantinovic projected visuals in smooth transition with the music and Marsen Jules took center-stage with his laptop, a few cymbals, and an array of tuned wine glasses. Jules himself played a minimal part in the performance, queuing samples of his work, mixing effects, and slowly rotating his finger across the glass rim, while Anwar played the violin, and Jan Phillip played on the old piano. After a few days of experimental and abstract music, this was the first performance that finally delivered harmony and musicality to my ears. And I can’t thank the trio enough, for placing me back into a world of music where not everything needs to be distorted, jiggered and destroyed.

For the last performance of the evening, Australia’s Pimmon took the stage to cover the audience with warm drones, ambient pads, and occasional glitches. Paul Gough “uses technology to shape compositions based in granular synthesis, often using elements such as pitch and sound debris to form soundscapes that are once maximalist in texture and yet minimal in overall design”. The evening ran a bit late, and although I wanted to sit through the entire showcase, I had to run over to the SAT to catch the ending set of Overcast Sound. My sincere apologies to Paul, as I hope to be able to catch him next time, when my mind is not in a state of total sensory overload.

At the SAT, Michael Pettit and Jamie Drouin of the Overcast Sound played minimal dubbed-out beats. The crowd gathered at the stage where instead of dancing, they sat on the floor, swaying in time with the minor echoed chords and hypnotic rhythms. Be sure to check out their latest releases, as well as Jamie Drouin’s solo work on Dragon’s Eye and INFREQUENCY, and an Overcast Sound April Ambient Mix for Headphone Commute’s Podcast!

The club atmosphere was excellent, and it perfectly set the stage for Demdike Stare. Once again, Miles Whittaker and Sean Canty filled the room with warm dubbed out sounds and deep rolling bass. Be sure to pick up Demdike Stare’s Symbiosis out on Modern Love. I kept going back and forth between SAT and Club Soda, where Orphx and Actress were playing, but must admit that I enjoyed Overcast Sound and Demdike Stare a lot more… Plus, it’s worth it to mention that both groups are incredibly warm and wonderful people! 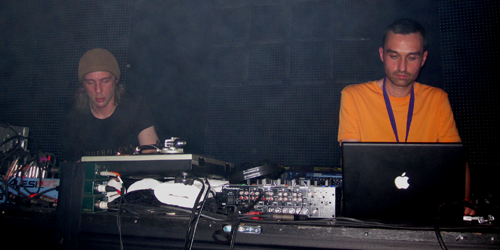 And then King Midas Sound came on… Opening up with an auditory illusion of Shepard tone and a background helicopter sound, Kevin Martin pushed the sound system to the limit, while Kiki Hitomi and Roger Robinson took on the vocals. Loved this performance. My only comment is that it was a bit too loud, and at times seemed that Martin was always in the red, as the high-frequency white noise overpowered the depth and warmth of that King Midas Sound, I learned to love from Waiting For You… out on Hyperdub. Also, be sure to check out Kevin Martin’s London Zoo released as The Bug on Ninja Tune. 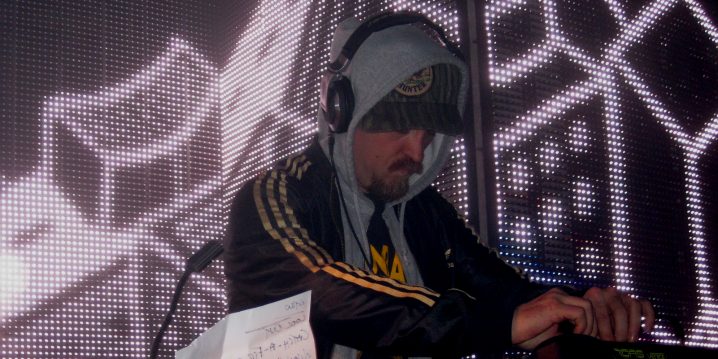 Once again, I was too mesmerized by all of the music to properly attend Cheap And Deep, Jacek Sienkiewicz and Shed over at Club Soda. I know! It sucks! And at the end of the night, Ikonika took on the stage at SAT. I’ve danced myself silly to her chiptune meets dubstep meets latin techno beats, and then passed out at my hotel…