Walking around Montreal, I tried to absorb the environment the way a city dweller would. Taking in the tourist sights as well as the side streets filled with graffiti and occasional construction barricades, my feet explored the grounds of the surrounding neighborhood. But no matter how far I ventured (within the walking distance), I was always reminded of the main reason why I was here. The banners advertising the festival placed around the city built up my anticipation for the upcoming event. Walking around Montreal I wondered if the regular citizen knew, that just around the corner, in a small area enclosed by Monument-National and the Society of Arts and Technology (SAT), one of the largest electronic music festivals in North America is about to take place. 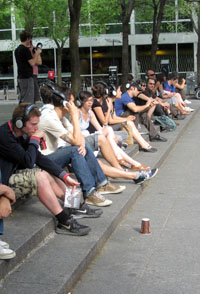 In the afternoon, I walked out of Chinatown via Saint Laurent Boulevard to Peace Park (Place de la Paix). On the side of the street, a white bus filled with CD listening stations showcased the upcoming artist performances. On the steps leading to the square park, a group of early festival attendants sat listening to the music, wearing wireless Sennheisers. As I picked up my free headset, I noticed that it was Colin de la Plante (The Mole), who was downloading minimal techno beats into the crowd’s ears. Much to the amusement of the homeless and the drunks, the people were bopping their heads and tapping their feet in an invisible sync to the silent beat over the air.

At my first Expérience event, I sat in the dark room surrounded by the sounds of Stephen Beaupré (Gemmiform) and the incredibly evolving visuals of Nancy Belzile, Patrick Bernatchez, and David Fafard. I immediately fell in love with Beaupré’s sound, built on samples of acoustic instruments and organic field recordings fused with synthesized sound, an array of effects, and punctuated beats. The music seemed to encapsulate the visuals of crystal forming water particles and the theme of “genesis, growth, metamorphosis and decay, desire, joy and loss, mythos and the natural world, of which the image of a bud, the gemmiform, is a perfect synthesis.” Fans of Murcof must seek his music out!

The A/Visions showcase, subtitled Pandora’s Box, featured “duos who are all to some degree engaging or reacting to the reflections and refractions of the world through the mirror of technological innovation.” Let me skip a bit around the program. The Baltimore-based duo of Drew Daniel and Martin Schmidt (Matmos) seemed to headline the event, with their playful musique concrète sound, luring the audience into their world of pop abstractions, bended metallic sheets and squeaky toys. Matmos has recently spent some time touring with Bjork, having last released Supreme Baloon on Matador in 2008. Following this duo, Thomas Macintosh and Emmanuel Madan performed their Symphony #2 for Dot Matrix Printers as [The User]. Synchronizing fifteen computers and printers (why not a binary number of sixteen?) [edit: Emmanuel later told me that the 16th node in a chain is the main sync server], this obsolete peripheral orchestra performed the ASCII text-file score of motorized screeches, high frequency characters and deep rumbling carriage returns. Checkout their releases on the Dutch Staalplaat label – the two symphonies are available on vinyl.

What impressed me the most, however, was the opening performance by Martin Messier and Nicolas Bernier. In this North American premier, the duo paid tribute to the futurist Luigi Russolo. Using their own custom sound boxes designed by Alexandre Landry, called intonarumori, the group pulled, bowed, and slapped the see-through contraptions for their noise driven and digitally effected piece, La Chambre des Machines. This was a one of a kind experience, where the industrial sound of analog and mechanical machines, along with a group of wound alarm clocks, were driven by the physical energy of Bernier + Messier to challenge the marriage of noise and music. At times the artists even appeared to violently abuse their instruments – at one point the alarm clocks hit the floor – yet the music moaned and howled in all its resonant glory. Russolo would be proud! Check out their works on the Ekumen label. Words alone can not possibly describe this performance, so watch this video clip where you can witness for yourself!