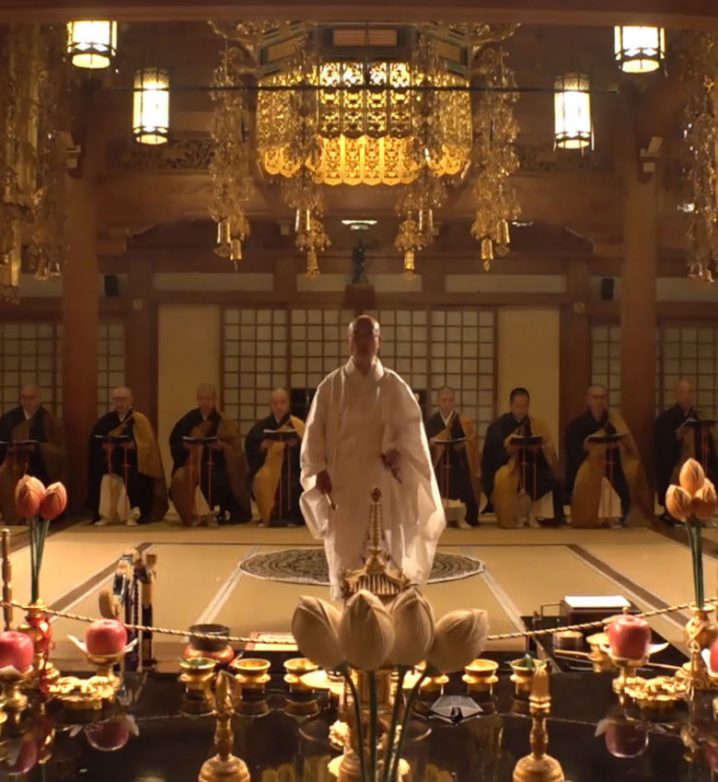 On Tuesday, March 30th, the Japan Society of NYC, broadcast a live performance of the Shomyo no Kai (Voices of a Thousand Years) chanting Tsuki no Kogon (Moonlight Mantra) composed by Yu Kuwabara. I was invited to attend this virtual event, but it was scheduled for an 8 pm EST live stream, which was already past midnight for me in the United Kingdom. The good news is that the recording was archived, and is now available for paid viewing at a time convenient for me and for you. It’s incredible to be able to witness this rare event in the midst of the pandemic, and I want to take a moment to recognize that fact. There are plenty of negative outcomes that came with the lockdown, and they seem to be full front and centre of everything that we do. But there are a few positive things that have blossomed, even though they were forced upon us with this unprecedented event. One of those aspects is the ability to broadcast and archive live shows. With the infrastructure to record, host, and support future viewings, [some] venues have now adapted to this environment, and such presentations will be in place for the future. The performance was set in Tokyo; it was put together by the nonprofit organization from New York in partnership with The University of Chicago Presents; it can now be viewed by me in my London home studio and by you, wherever you are. Truly, this was not really on offer before, although the technology was available and the streaming was possible. So the world has already evolved, into what is the new norm. For that, I am thankful.

With a performance set in the exceptional acoustics and grand sacred space of An’yo-in Temple, one of the oldest temples in Itabashi Ward in Japan, this concert offers a rare opportunity to hear this ancient oral ritual come to vibrant life. Clad in brightly colored monastic robes, the choir alternates between monotone stillness and ecstatic polyphony. The ethereal voices of Shomyo no Kai swell in powerful harmony, enrapturing the listener into a transcendent meditative state.

I have previously witnessed the Voices of a Thousand Years, seven years ago, at St. Bartholomew’s Church in New York – read my words on the performance here: Sonbou no Toki. During the show and my subsequent writeup, I’ve reflected on the concept of listening, the process of sound origination, its perception, and mental formation within our own consciousness. In his talk on active listening (filmed at Loop 2018 in Los Angeles), Lawrence English invites the observer to participate in the act of focusing one’s attention on the sound and therefore becoming a part of the process and its realization into being as part of the artistic pursuit. In his fascinating presentation, English proposes that creativity can be found in the act of listening, by choosing where one can direct their attention to cognize the main purpose of what’s communicated with sound.

But the Buddhist can go even further. They put forth the question of “who is doing the listening?” This is the concept of Suññatā which translates from Pali into emptiness, nothingness, and void – something that I’ve explored with my dear friend James Murray on our last collaboration together titled under the same name (see Suññatā out on Home Normal). The premise of such deep listening lies in the examination of self. The ears become the instrument with which the sound is heard. The process of perception is an automatic experience that seems to be occurring on its own. The further cognition and the conscious formation of what it is that we hear are also apparently independent of our volition. So if the ear is not “me“, and the perception is not “me“, and the active participation in its awareness is not “me“, then where is “me” and can it be discovered? 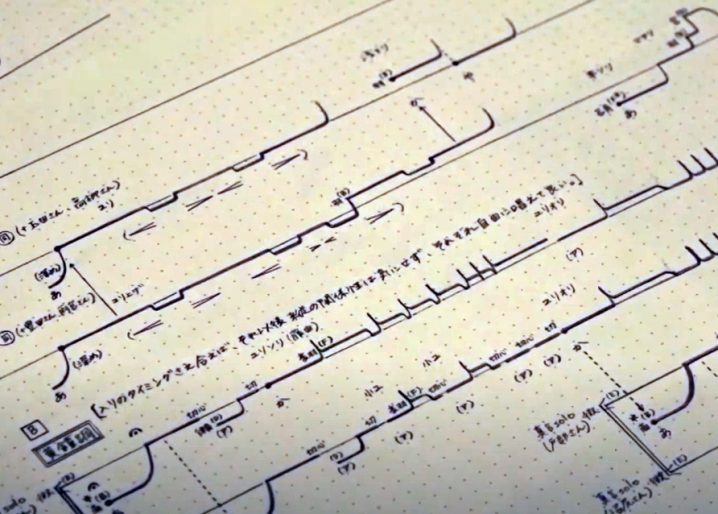 These, and other abstract and esoteric ideas seem to come and go as I listen to the Moonlight Mantra. I invite you to ponder on some of these thoughts, in the company of the Voices of a Thousand Years during this absolutely wonderful performance. The 90-minute recording features an introduction by the group leader, Rev. Kojun Arai, explaining the origins of Shomyo and its contemporary manifestation in Kuwabara’s composition. Following this overview, the director of the concert, Hiromi Tamura, introduces the unique structure of the piece. Lastly, the young composer will share the special musical notation that she invented to compose contemporary shomyo pieces. The latter should be absolutely fascinating to those challenging the Westernized equal-temperament structure of the music which may be repressing all possibilities (“highlighting the cultural asymmetries and biases inherent in modern music-making tools…“). The recording comes with a 12-page program which, besides more information on the participants of this presentation, includes the “lyrics”  for the vocal chant. The recording is currently available for purchase and your offline viewing through April 30th directly from the Japan Society at the link below: