Well, well, well… what do we have here? An all-day electronic music festival, featuring some of the absolute heavy hitters in the “cutting edge electronic music and classic IDM,” and it’s happening right under my nose, here in London, at St John on Bethnal Green on a Saturday afternoon? You have to be kidding me! Where else would I get a chance to see such a roster, bringing together some of my all-time favorite artists all in one place? Would it be worth to plant my bottom on the front wooden pew of this 19th century Anglican church for almost 10 hours straight (don’t worry, I found a pillow!) to witness these live performances, and then, in the proximity of such an intimate gathering, meet the legends and idols of the 90s electronica? You betcha! So let’s begin! 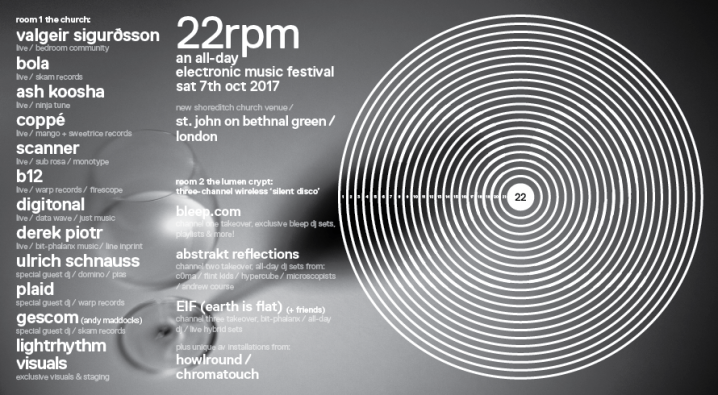 First a bit of the background – or as much of the background as I could gather. 22rpm is an annual gathering bringing a stellar lineup along with the up-and-comers of the electronic music scene right to my doorsteps of London. For this year’s third installment, the festival is presented by Mango + Sweetrice Records in collaboration with Bit-Phalanx Music celebrating the 22nd year anniversary of the imprint, and the release of Coppé‘s new album, titled Milk, which she performed live at the festival. Throw in some partnership with bleep.com and you begin to put together the jagged pieces that make up the necessary driving force which can bring this conglomerate of musicians together.

I snuck into the venue before the doors even opened (as I always do), which, not only allowed me to glimpse at the proficiency of the crew’s soundcheck, but also meet up with Andy Dobson and Dom Graveson of Digitonal before their excellent performance, featuring some familiar and new tunes. In between the live shows, DJs selected their favorite tunes to fill-in the musty air of the chapel. Look closer and see, oh, I don’t know, it’s only Ed Handley and Andy Turner of Plaid behind the mixer, or Andy Maddocks with a laptop covered in Skam stickers showcasing his label’s classic (and new?) tracks. Downstairs, in the Lumen Crypt of the church (and when they said ‘crypt’ they really meant it), the crowd moved with the sweet scent of swelter with the music broadcast via a three-channel wireless headset of the Silent Disco, pumping in the sounds of Abstract Reflections and Bleep.

Back in the main hall, B12 played “something very different” for the audience, featuring a vocalist and a belly dancer. This was followed by the ethereal pieces selected by Ulrich Schnauss on the decks before Coppé sang her “milk jazzy” set featuring a trumpet, a three-piece jazz band, and a laptop accompaniment. Finally, I got a chance to see Robin Rimbaud of Scanner perform live some music from his latest album on Glacial Movements (if you haven’t heard it, definitely check out The Great Crater) before Ash Koosha took the stage. Really enjoyed Rimbaud’s energy behind all of the wires – it’s so hard to be able to connect with a live electronic-music show these days (is the artist just browsing the internet back there?), so the human element here is extremely important!

At this point, I had to take a short break and run out to grab me a bite (dear first-time festival goers, always put some food into your head). I returned just in time for Bola‘s opening track, playing the music from their latest D.E.G. album on Skam. Combined with some mind-blowing visuals and intricate glitchy elements, my neurons were firing on all cylinders. The night and the festival concluded with a very special performance by Valgeir Sigurðsson (my favorite of the night), as the lights dimmed, the audience finally settled down (hey, London, what’s up with all the talking all the time? You’re at a concert!) and the viola sang its requiem with the impeccable dynamics of Dissonance and even Architecture Of Loss.

A gorgeous Saturday afternoon and evening (especially since I think it rained, out there, in the real world), and I couldn’t have been happier in any other place, especially because there’s really nowhere else, where such a pungent assemblage of talent could be found under one, two-hundred-year-old, roof. As I’m writing these words, a mix of Incunabula, Tri Repetae, Key Nell, ISS:SA and Fyuiti, is playing through my speakers, and my nostalgia swells up, for past and future times, where I will hear these tunes again. Already looking forward to next year!

Photos by Bit-Phalanx
Words by HC