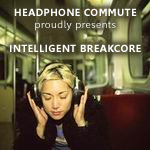 This mix has been in the making for quiet some time. Maybe not in its actuality, but at least in my head. It all started when I was compiling Headphone Commute’s Best of 2008 list at the end of December last year. I wanted to select some of my favorite tracks and create hour-long sessions. That lead into separation of genres into Modern Classical, Organic Ambient, and this one, Intelligent Breakcore. Of course, I’m about six months overdue now, but that only allowed me for squeeze in a few of 2009 releases. A-n-y-w-a-y… Here’s for your pleasure sixty minutes of uninterrupted intelligent and dark goodness from some of my favorite labels. Enjoy, and if you like it, let me know, I’ll post the other two mixes up here…