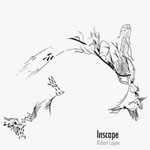 This morning I’m a little bit on edge. In part because of continuous wet and cold weather that makes my bones and muscles ache. In part because of Robert Logan and his new release on Slowfoot titled Inscape. As I commute to music on my way to work, disturbing images flicker behind my eyelids: abandoned places, dark hallways, churning factories of the unknown. The industrial percussion grinds away in a moldy basement of an old asylum, where dreams become reality and nightmares turn to life. Somewhere deep within this dark flashback, a kitten walks up the piano keys, all skin and bone.

The instrumentation on Inscape is comprised of sharp metallic needles, poking at the delicate tissue of your brain, reversing, glitching, and dancing in a distorted fury of lust for artificial coupling. The material is raw and synthetic, coming to life with a jolt of electricity and toxic chemical reactions. And that’s just the first few tracks… Logan’s previous release, Grinder EP (Slowfoot, 2008), has already been previously hailed by yours truly with the following observation: “The sound of the four pieces [on Grinder] is a continuously developing crunchy groove with a touch of big beat, infusion of hip-hop, and a base of dark ambient texture swishing at the bottom of this poisonous cocktail.” With Inscape, Logan stayed true to his formula and continued the embrace of digital darkness and sinister soundscapes.

As I prepare the write up for this album, I discover that Logan’s inspiration behind Inscape was indeed an abandoned factory in Hungary which was being swallowed back by the engulfing forest. Well, now… I guess he did his homework right. As a testament from my comments above, I’ve witnessed these images through his music with no prior knowledge on the background. There are other notable albums that revolve around the concept of nature taking over man-made structures, like The Refractor‘s All Colors Run EP (self released, 2008) and Jóhann Jóhannsson‘s Fordlandia (4AD, 2008), but Logan does it with a much threatening vigor. There is no sadness in Inscape. It is rather a ruthless take back of what was rightfully owned.

I should also perhaps mention that Logan is only 21, and has already opened for Grace Jones at Massive Attack‘s Meltdown. But Logan’s music is strong enough to standout on its own. Inscape is Logan’s sophomore release, following his debut, Cognessence (Slowfoot, 2007). Recommended if you like Hymen artists such as Hecq, Architect, and Ginormous as well as music from Tympanik Audio by Totakeke, Stendeck, and Autoclav1.1.