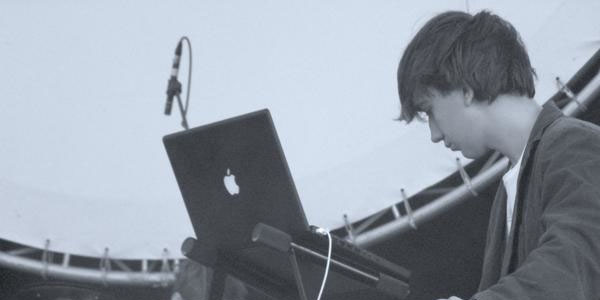 Tell us about the abandoned factory in Hungary and the inspiration for the album.
I like to go exploring, and Hungary has some very unconventionally beautiful environments to discover. On one of these exploits I found an old factory in the middle of a forest. It was summer, it was twilight, and I found this sinister, strangely attractive bit of disused industry in the middle of woodland in the blood-red light of evening. I love the natural world and the traditional villages in Hungary; I don’t want these things to disappear. But I also have a fascination, on a purely visual and auditory level, with machines and industry. That site was just an interesting visual reflection of the strange contrasts in sound on the album for me, as well as its use and abuse of organic instruments through digital means. I love striking oppositions. However, it’s just one small piece of inspiration: loads of things inspired the album’s development, from novels, films, paintings and insects, to whatever boring pop track I may have heard on someone’s radio on the day I made whatever track it was I made.

With Inscape you seem to drift a bit further from dubstep into experimental dark IDM domain. Would you agree?
I’ve never really intended to make dubstep, or any specific genre or subgenre of music. This obsession began when I was about seven – I would improvise on the piano for hours, forming strange musical worlds to inhabit–and the process is the same today, only now it’s with electronics and other instruments. I’ve always gone into the studio and followed wherever my imagination leads. I try to create the kind of sounds I would like to hear that I haven’t heard yet – to the best standard I can. Many influences, including dubstep, undoubtedly affect the tracks, and I will sometimes deliberately reference elements of different styles if it works towards making the music more interesting, but generally I don’t consciously consider genre while creating. I originally intended this new album to be more “instant” and melodic than the last, but I ended up becoming obsessed with a murkier, wilder, more frantic, dense musical landscape instead. There are often more details within tracks to follow in this one compared with the last, so I suppose I agree with the question. However, I would hope people find beauty in the album as well as darkness.

Tell us a bit about the ink drawings on the album artwork.
Lianne Victoria Chan did those. She’s a very inspiring artist and she has done many other amazing large-scale ink drawings similar to the ones used for the C.D. She created the artwork while listening to the album in its various stages of development, and I offered a few vague suggestions here and there, but the process was really totally down to her and JJ Wood, who designed the layout of the digipack.

What is your production setup like? What software/hardware do you have in your studio?
I use quite a bit of hardware, including a bunch of synths and some old external effects units and an M-Audio MicroTrack for field recordings. I got a lovely sounding cimbalom from a gypsy family I know, and I’ve got a bizarre collection of acoustic instruments from second hand shops and Ebay. Everything normally ends up on the computer sequencers where I spend ages manipulating things, putting them through various processes, cutting them to pieces and re-assembling them again. I mostly create beats on the MPC, though I have no set way of doing anything. A track could start with me recording myself sneezing, putting that through lots of software processes and plugins, mapping those results across the some pads, bashing something back into the computer again…There are no rules. As long as I can refine the results into something that is quality, I’m happy.

What are your thoughts on the differences between the digital and the organic?
I’m not sure. I may be wrong, but in one sense, I guess the digital world is becoming pretty “organic” itself, what with its parallelism verses sequentiality, its free growth verses hierarchical structures, its non-linearity, its decentered structure…And new technology has allowed the process of music creation to become very fluid and playful – though you can have a tyrannical level of control over very detail, you can also simply set up or design your own system and then let it run. I’d love it if I could get a huge analogue modular system: you can leave those things running for days, and the sounds evolve like an organism over time.