As with any conceptual album, we have to start with an idea. Where did your work with the prime numbers begin?
In 2008, I was invited by Duane Pitre to contribute a piece in just intonation for a compilation CD called “The Harmonic Series” on Important Records. This is when I came up with my prime number system / patch / ideas in MaxMSP as my own angle on working in Just Intonation. Then I made an album called Primes which I released on Autumn Records in 2009.

I think that working with a very precise data set is a bit easier with software (as opposed to, say, a modular synth setup). How did you get into programming with Max/MSP?
I started working with MaxMSP around 1999 shortly after I moved to Boston to go to graduate school at the New England Conservatory. I was studying composition there and they didn’t really have an electronic music program or studio, so I began studying and working on MaxMSP and other computer music software independently on my own while I was in school there.

You’ve been working with Max/MSP since 1999. Any chance of exporting this particular system as a Max for Live device? Is it open-sourced in GitHub? 😉
I’ve rarely shared my patches publicly (except for some Pluggo plugins that I made back in the day), mainly because almost all of my patches are very peculiar and specific to me and what kind of music I’m trying to make at any given time and they probably wouldn’t make sense to the broader public.

The pieces sound so warm and textural. Is it really just all sine oscillations on here? Were you surprised by the universe this simplicity opens up?
Yes, it’s all sine tone oscillators (14 to be exact) creating the textures and patterns. I knew that the various tuning relationships that the prime number sets created would be interesting to listen to. It’s been a long process of listening a lot and refining the patch over the years to make it more musical. 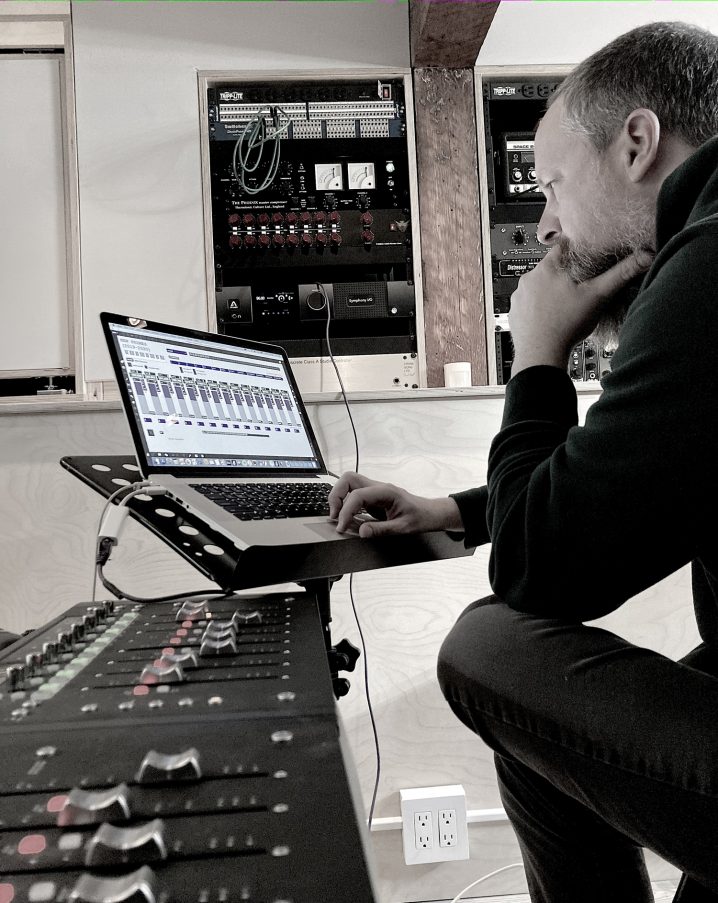 What dynamic scale or function did you employ for the higher overtones within each fundamental and is it also constantly shifting?
All of the parameters of each piece are determined by the prime number sets, so pitch / harmony / rhythm / fading / panning / time scale, etc. are all linked to the prime number set chosen for each piece. Then the pieces play out in a generative fashion, unfolding in different ways over time. I have control over the mix and octave shifting of the 14 sine tones, and I tried to set a balance that felt right. Once the mix is set, I let the piece unfold over time, the pieces on the album are snapshots (6 mins or so) of much longer (infinite?) pieces.

I’m curious about the wave shape. If we take a sine wave and keep its odd harmonics, we can approximate a square wave. With a faster roll off of the higher harmonics, we can get to a triangle wave. Did you use an oscilloscope to see what the final waveform looked like (and do you have any screenshots)?
These pieces are all created by additive sine wave synthesis, so there is no wave shaping going on. What you hear is a stack of sine tones from a base frequency (root note) and then the particular prime number set overtones / harmonics from that root with some octave shifting to put all 14 tones within a comfortable frequency range.

What drives the generative nature of the pieces? What is the source for randomness if any? What attribute of the sinusoidal waves is modulated the most?
The prime number sets used in the piece drive all of the generative (and musical) aspects of the piece. Since I am dealing with prime numbers there are really no repeats at all, the music unfolds and shifts according to its own internal logic. There isn’t any randomness or modulation of the sine tones involved in these pieces.

I’m curious about where you drew the line for cutting off the lowest and highest frequencies. Is it purely within the range of human hearing, or are there lower vibrating tonalities in the piece?
Mostly I just folded the frequencies (using octave shifting) into a comfortable and musical space to create the final mixes / textures. I just used my ear to guide me. There are some pretty low frequencies in some of the pieces but I think most everything is within the standard range of human hearing. 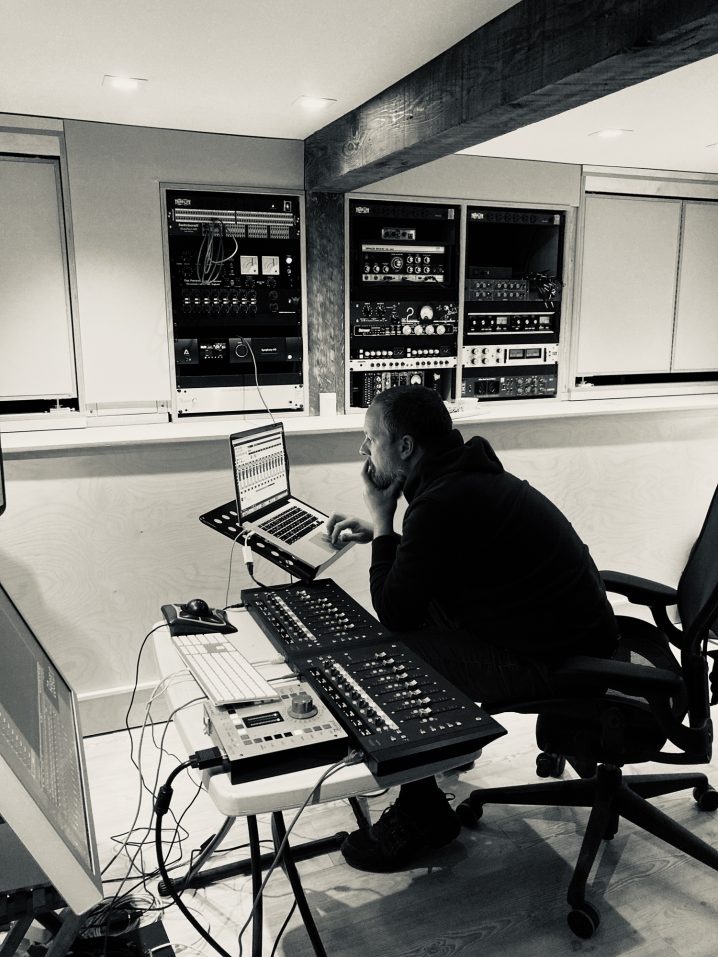 I absolutely agree that these are addictively listenable (now send me that Max/MSP device! lol!). Why, do you think, do these harmonic and dissonant overlaps sound “interesting” to a human brain?
I’m not sure! I wanted to make pieces that were interesting to listen to so I let my ear guide me the whole way. I wanted pieces that sounded interesting even without knowing or learning about any of the processes or math or whatever behind the music. I shaped these pieces over a long period of time until I settled on musical results that I really liked, I did a lot of tweaking and adjusting and listening to make it arrive where they did.

Tell us about the evolution of this particular record, starting with your introduction to Joseph Branciforte of greyfade.
Joe contacted me around 2016 because he discovered my Primes CD (from 2009) and was really into it. He had the idea of starting greyfade and urged me to do a new, updated version of the Primes music for his label. I started working on updating my patch and tweaking it and revamping it for a live 8-channel performance at the Fridman Gallery in NYC in 2019 and after that, I began working on recording / mixing / editing the pieces on New Primes which were all finished up in late 2021. I’m really happy Joe reached out to me, it’s been a long process but I’m satisfied with the results and it’s been great working with Joe and getting to know him. 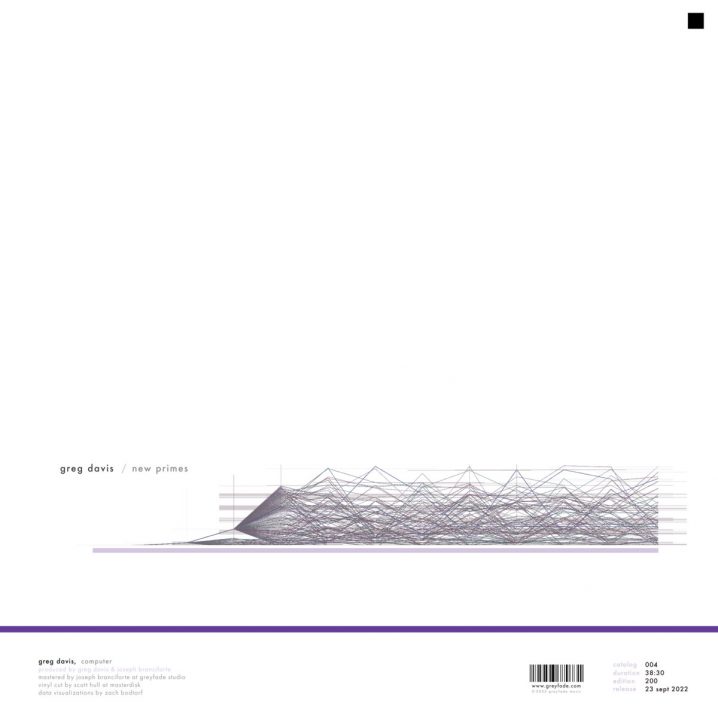 I know that software engineers always think of improving their output. Do you intend to continue and evolve this particular method? Where would you be taking it next?
This is probably the logical ending point for my Primes / New Primes project. I plan on playing a handful of shows at the end of the year and maybe into next year to present this music live and then after that, I will most likely put this project to bed. The patch may evolve slightly for the live performances but I think I’m pretty happy with where it is at right now. I have a bunch of other ideas / music / projects that I’m excited to move forward with and finish now that this album is all done.