I have to confess – sometimes it does feel a bit lonely on this side of the screen, typing away all these letters and words, pasting the links into amplified networks, wondering what is the point of spending my time, vested in sharing my favourite music. And then, out of nowhere, I usually get all the answers. Two came at me in one shot just today. First, I am absolutely honoured for the opportunity to premiere a track from an upcoming release by my favourite project, A Winged Victory for the Sullen. I’ve been swooning over this collaboration between Dustin O’Halloran and Adam Wiltzie since their self-titled debut in 2011 on Kranky and Erased Tapes. In 2019, we’ve seen the duo get noticed by the mighty Ninja Tune for their highly praised The Undivided Five. And now, AWVFTS are trying to do something new, releasing Invisible Cities, on their very own Artificial Pinearch Manufacturing label. And the second reminder of credit for all my hard work came in a form of recognition of Headphone Commute in The Rock & Roll Globe’s “The Real Deal 30,” ranking the players in the music industry that really matter in 2021. I feel very thankful for both. Forgive this diversion, and let’s steer back to the music! Here’s am absolutely stunning piece, “Total Perspective Vortex,” which is the closer for this 13-track score to the critically acclaimed multimedia theatrical production by Leo Warner, adapted from Italo Calvino‘s 1972 novel, “Invisible Cities”.

As a wise man (Director Leo Warner from 59 Productions) once said: “Calvino’s novel ‘Invisible Cities‘ is a deceptively economical book of fiendish depth and complexity in which mirages of cities are conjured to express the extremes of human experience. Desire and despair, love and grief, birth and death. The urban and architectural story bears the same weight as the human, and as such the novel provides a fertile testbed for exploring a world in which architecture and human physicality are intertwined.” That description alone was enough for Dustin and me to be on board with the journey we made back in the spring of 2019.

This is a pensive, slow-burning, and heavenly music, with its vast spreading ambience, sparkling keys, and choral undertones. Beauty is dazzling this sonic landscape the way the sun cuts through the dark stormy clouds. The latter can be attributed to Wiltzie’s building, distorted, and scraping guitar riffs, which are replaced by the light of the atmospheric pads, covering valleys with virtuous, warm, and harmonic bliss. Besides the eight-piece choir, brass, and strings credited on the album, I spot American film composer Robert Donne, Finnish percussionist Samuli Kosminen, and Icelandic cellist Hildur Guðnadóttir among the contributors. This is a fine company, indeed! Here’s what Adam had to tell me about the final track on the album:

This track ‘Total Perspective Vortex’ is the climax, coda, and accumulation of the almost two-hour theatre production. It is where the past, present, and future all collide into a place where everything is connected, so we really had to push the limits of what we normally gravitate to. Melancholia bookends what is by far the most bellicose track we have ever released under the A Winged Victory for the Sullen moniker. 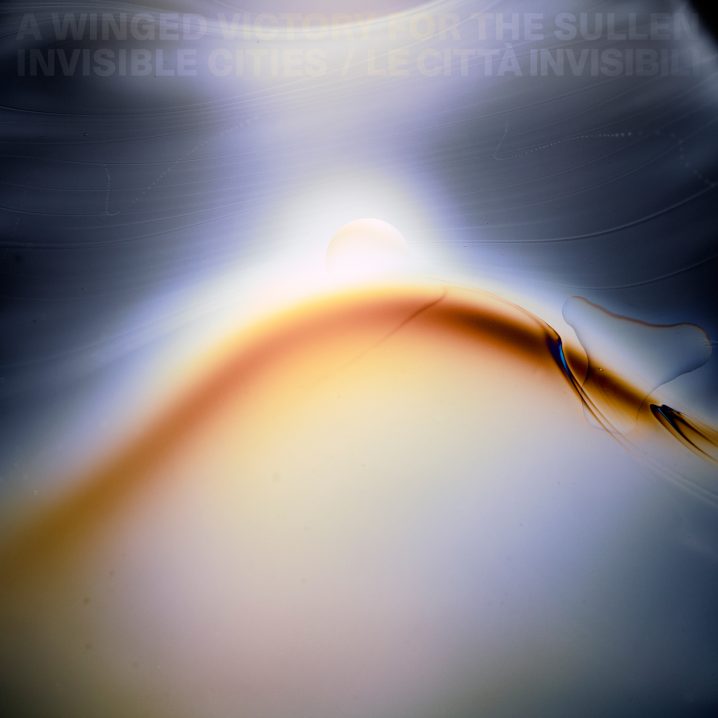 Conceived as a touring project, the global pandemic has put a damper on the performance schedule of Invisible Cities. As we try to climb out of this new norm of being, A Winged Victory for the Sullen hope to tour again, with 2021 performances scheduled in Hong Kong, Kuwait, and hopefully, London! Meanwhile, you can pre-order the vinyl (there is a black and an ultra-clear edition, CD, and even a cassette!) set to release on February 26. And if you’re a fan of the digital media, be sure to purchase a lossless download from the duo’s Bandcamp.