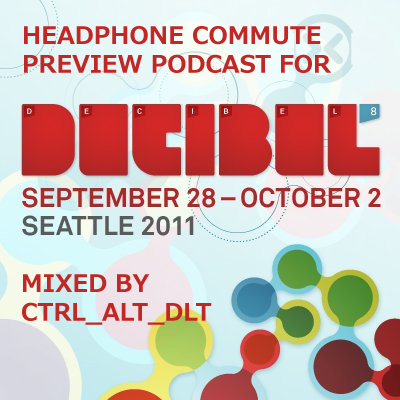 On today’s Headphone Commute Podcast we feature a very special mix from one of the performing artists at Seattle’s Decibel Festival, teasing you with a preview of things to come. The festival is only a few weeks away, but the party has already started! On this mix, Ctrl_Alt_Dlt showcases his favorite latest tunes, delivering a smooth hour-long exploration into some abstract tech-house and experimental beats. During the festival, Ctrl_Alt_Dlt will be hosting a very special Sweatbox Showcase along side Camea and Tim Xavier. But for now, here’s your preview for one of the most anticipating events of 2011 (at least on my calendar!)

Ctrl_Alt_Dlt is a Seattle based DJ originally hailing from the tame streets of suburban Detroit. “I went to my first party in 1999 and have had this insatiable appetite for techno music ever since, I just can’t get enough.” Strongly influenced by the sounds coming out of the Motor City, Ctrl_Alt_Dlt has taken the genre of techno and made it his own. His sets are rooted in the minimal sound with an emphasis on the more abstract side of things, while also fully incorporating all elements of techno and house creating a set full of highs and lows, never giving away too much at a time. “I like to find tracks that have the wierdest most abstract noises possible. Exposing people’s minds to sounds and textures they have never heard before is my ultimate goal.” In addition to residencies around the city Ctrl_Alt_Dlt is also a founding member of Sweatbox, a strictly techno based productions group who continue to bring the late night underground flavor to the city.