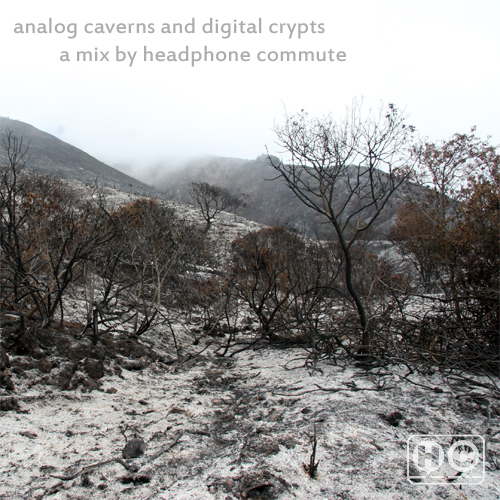 It’s been quite some time since I published my own mix. I actually compiled this selection of favorite tracks back in January, and let it marinate while other selectors stepped up to the plate. For this 90th mix on Headphone Commute, I’ll let it slowly ooze out of your speakers and drape your ears with darkness and cold. The theme on this mix explores dark ambient techno, hauntology, and experimental beats, alternating between banging rhythms and noisy drones, with a touch of speech for a good measure. It’s a trip and a half.

The cover image of the mix is a photo I took when travelling along California’s State Route 1 in July of 2008, and coming upon an ash covered Pfeiffer Big Sur State Park, which just reopened after a week-long fire, damaging over 163k acres of land. I thought it was appropriate for the mix, being a soundtrack for desolate places and deserted sites.

When selecting the tracks for the mix, I tried to stay pretty current, with most pieces being released in 2011, and a few nose dives into 2003 for an audible contrast. I also picked a handful of techno artists exploring ambient territories, as well as ambient artists exploring the beats. There are more than a few sonic surprises in here. So be sure to buckle up and enjoy responsibly.