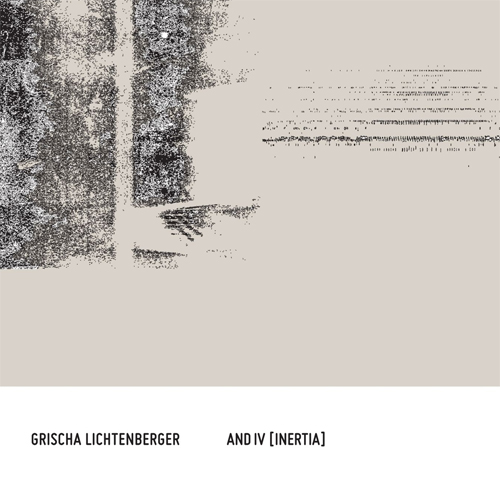 Somewhere around the first ten minutes of the album I do a double take. Wait a second… This is not the Grischa Lichtenberger that I know. These are not the staple Raster-Noton technoid sounds, designed in a pristine German studio, free of organism and dust. This is so much more than I initially expected, and when each of the 21 tracks ends, I quietly curse under my breath for a longer exploration of each theme! After a few rotations of the album, I post the following comment on my social networking outlets – “Move over, Autechre… Grischa Lichtenberger is in the house!” And yes, it causes quite a stir. Defenders of good ol’ Autechre stand up to hold on to the pedestal, refusing for the newcomers to come in!

Eclectically titled And IV [Inertia] is Düsseldorf-based Lichtenberger’s only first full-length release! But the demonstrated skill in sound design and production surpasses his two earlier EPs, ~Treibgut (Raster Noton, 2009) and Graviton – Cx (Rigid Transmission) (Semantica, 2011). The seemingly random percussion on the album is precisely engineered to obscure a very structured rhythm. The meticulously sculpted elements don’t really glitch, but instead are neatly wedged near the base foundation to interact with silence, time and negative space. The programming style is reflected in the numeric titles, perhaps named after the initial date, revision, morph layer and more (another nod to the Autechre era [?]). But peel the layers one by one, and there’s more to sound than sterile rhythmic assembly – each short piece harbors a warm and fuzzy melody, sometimes reflected in the tone of its percussion, sometimes in analog synth bass.

“The title, and IV (inertia), refers to a fictionalized successor of the Baksan Neutrino telescope in the Caucasus region. At first, it has been an idea for a novel, based on the consideration that it is impossible to deal with the topic of a ‘lebensraum’ like Berlin without being hit by stylization – so I had to experiment with strategies of fiction.” -Lichtenberger

The tracks are built on more than IDM nostalgia of post-90’s Warp experimentation. It is as if Lichtenberger checked out an earlier branch of Autechre’s source code, and began developing with no intent of merging back. This study of sound includes field recordings from Lichtenberger’s environment, which are “manipulated and broken down to their bare nakedness until only fragments are left.” And the evoked mental images without a doubt flashback to Gantz Graf video. There are amazing and beautiful moments on the album – some that fans of Autechre, Arovane, and Funkstoerung must admit to appreciate. And with my earlier [controversial] comment, I didn’t really propose to displace the beloved fathers of experimental sound, I merely asked them to slide a little to the side, so that the spotlight could be shared…

Be sure to read Interview with Grischa Lichtenberger