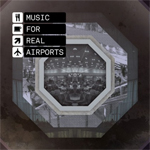 Paying homage to Brian Eno‘s ambient masterpiece, Music for Airports (Polydor, 1978), which Eno created for the whole purpose of being played in actual airports, to convey calmness and reassurance to the passengers about to set off on an airborne journey, The Black Dog set out to create their own version, designed for real airports. But, unlike Eno’s version, this album is “not a utilitarian accompaniment to airports, in the sense of reinforcing the false utopia and fake idealism of air travel“. The album is a pristine selection of beautiful tracks, with an overlay of field recordings collected through the three years of the group’s tour travels. And instead of conceptual and abstract, The Black Dog delivers a cinematic and very personal album, that will captivate you in any surrounding.

To further elaborate on the contrast between the two works, here’s a Brian Eno quote from a TV interview:

“One day I was sitting in this beautiful airport, Cologne airport. It was a Sunday morning and the sun was streaming in. It was the most beautiful piece of architecture… And the most idiotically stupid pop music playing… You put all this attention into the architecture and the ambience in every respect except the music. What is the music? It’s what some person’s brought in that morning and stuck in a cassette player… So I started constructing in my mind what would be the right music for the airport.”

In general terms, Eno’s view was that the music should communicate a feeling rather than a narrative, and that it should be soothing. It should help people feel comfortable and resign themselves to the inconvenience and ultimately disconcerting nature of air travel.

The Black Dog take a different approach. Based on over 200 hours of field recordings at airports, Music for Real Airports is not a record “to be used by airport authorities to lull their customers.” Rather, it embraces the underlying fear and anxiety and revels in it. “Wait Behind This Line”, for example, is a gloomy death march, a bottomless pit of despair and hopelessness. In other places, the album swings the other way and captures the excitement and sense of adventure that airports can also evoke. On the whole, it’s an engaging album.

I’ll save my breath in covering the history of the group. I trust you can point your clickers to their Wikipedia entry for all the details. But in case you didn’t know, the group was originally founded by Ken Downie, Ed Handley and Andy Turner, and were one of the founding figures of IDM as a genre. Handley and Turner set off to create and focus on Plaid back in 1995, while Downie was joined by Martin and Richard Dust to continue the legacy, that, in my opinion, is only blossoming…

If you missed the group’s earlier releases, pick up Radio Scarecrow (Soma, 2008) and Further Vexations (Soma, 2009). In contrast to Music for Real Airports the above mentioned are more beat oriented albums, falling into the techno genre, as defined by The Black Dog’s original style. Be sure to also check out the mixes that The Black Dog regularly make available on their website. The latest – Drifting Ambient Mix May 2010 – is a doozie.

Recommended if you loved the ambiance of Lusine ICL’s Language Barrier (Hymen, 2007), Arovane‘s Lilies (City Centre Offices, 2004), and Autechre‘s Amber (Warp, 1994). As I’m writing this review, I’m on my fifth listen of the album, becoming more and more convinced that it will go down in history as one of my absolute favorites.