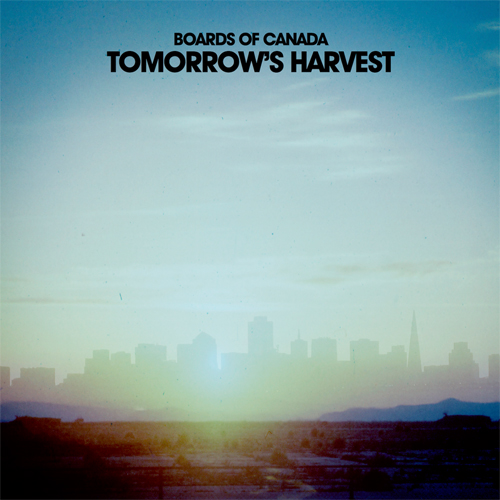 It would be a major understatement to claim that Tomorrow’s Harvest was a highly anticipated release. It seems that ever since the group’s last record in 2005, The Campfire Headphase, the internet would light up with annual gossip of their return, the frenzy spreading fast and wide only to dead-end in another discredited rumor. So it’s no wonder that this time around, when Warp used the incredibly clever marketing campaign of embedding cryptic codes via six distinct entities (like BBC Radio 1, NPR and Adult Swim), I took some time in confirming the announcement’s authenticity. So what’s the big deal about Boards of Canada, and at what point did the Scottish electronic music duo reach this near cultish following? And why did I, along with so many, listened to the premiere of the album via YouTube and then immediately preordered both, the CD and vinyl?

The word is that the two brothers, Mike Sandison and Marcus Eouin, began slowly working on their fourth studio album following the release of The Campfire Headphase. And if it took them almost eight years to produce the follow-up, then it was the eight years worth waiting for. There are many things I can say about the album, but it all boils down to this: Tomorrow’s Harvest is a classic Boards Of Canada album that only Boards Of Canada could make. Recorded at BoC’s own studio, called Hexagon Sun (located in south-west of Edinburgh, Scotland), the duo seemed interested in escaping the urban environment, preferring to work in isolation away from evolving genres and latest growing fads. This is perhaps why the sound of Tomorrow’s Harvest is so timeless, yet imprinted with that one specific point in time when Towism, Hi Scores and Boc Maxima used to dominate my playlists.

The challenge with this record was crafting the tunes into a specific style and time period we want to reference. […] In this case there’s a deliberate VHS video-nasty element throughout the record and to get there it wasn’t just a case of processing sounds through old media, which is a given with us anyway, but we even went to the extent of timing changes in the music and the composition of the pieces, in really specific ways to give an impression of something familiar from soundtrack work that was around 30 years ago.

The sound is full of lush, rich and deep ambient textures, stretching and warping through downtempo rhythms, like an old cassette tape left in a hot car over a weekend. There are plenty of vintage analog synth sounds and lo-fi treatments with even more subliminal messages and hypnotic layered patterns which immediately bring back the nostalgia of that dear ‘ol Boards of Canada. The title of the album, by the way, is inspired by Deadly Harvest, a 1977 film on widespread crop failures in North America, but that’s as close as the music comes to being post-apocalyptic. What’s even more explicit is the newly confirmed fact that those who’ve tried to replicate the BoC sound have definitely failed, as this imaginary soundtrack to the dusty documentary on ghostly cities is still the strength within their work. And that’s what the brothers have been working on all these years.

There is a lot more that I could say about this record. But as with many critically acclaimed albums I often wonder if I should even bother. It’s not like I feel a responsibility of proclaiming my new discovery to the world and letting you know that this is an album you must own – I’m sure that you already do. It’s not like I must produce a counted amount of words to keep my day job as a critic – I’m sure I’d never write a word. I guess for me, this coverage is more like a statement of an acknowledgement, that yes, I’ve had incredibly high hopes for Boards of Canada, and yes, it certainly delivered! And after more than a dozen plays, here’s to many more rotations to come!

[1] Louis Pattison, “Boards of Canada: We’ve become a lot more nihilistic over the years” The Guardian