Hauntology… No, not an idea of Derrida’s within philosophy of history, but more of a state of mind induced by this music, deserving its own special name. More than an eerie feeling evoked by the sound, but rather the sound itself, rising from within the ashes of burned memories and dreams. The music comes from crate diggers, creeping through abandoned warehouses in search of buried treasure. Exorcising the demons and freeing the trapped souls, these albums play a tribute to the ones already gone, the remnants of music heard only in the passing of time. Welcome to hauntology – the paradoxical state of the spectre which is neither being nor non-being. I hope you enjoy your stay… 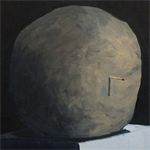 James Leyland Kirby has established quite a rapport with his experimental and sound collage project, V/Vm. Released mostly on his own V/Vm Test Records, Kirby’s numerous records range from pig noise to pure destruction of contemporary pop-songs. But his output as The Caretaker is of completely different character. Collecting “stolen memories and feelings from within the Haunted Ballroom”, the music on his releases scratches at the surface of dusted records and abandoned artifacts. His critically acclaimed Persistent Repetition of Phrases (2008), on a newly spun out History Always Favours The Winners, explored ghostly echoes of melodies almost familiar, if only your consciousness can hold on to them long enough. On An Empty Bliss Beyond This World, Kirby takes his unique approach even further, by guiding discarded material into endless loops, subtle effects, and suppressed memories. Using sampled layers from his secret collection of old 78″ records, including the vinyl surface noise, The Caretaker reconstructs nostalgia, flashbacks, and déjà vu. Inspired by the 2010 study on Alzheimer’s disease, that has shown patients remembering new information with the aid of music, the fifteen small “memories” fade in and out of focus, sometimes ending abruptly, sometimes appearing twice on the album! What’s more amazing to me, is that after a few plays, these tunes become familiar and are at once stored in the banks of my memory. I love leaving this album playing in the background in my office! The covert art of the album features a specially commissioned painting by Ivan Seal. See if you can also hunt down a 72 track massive release, Theoretically Pure Anterograde Amnesia, digitally re-released by History Always Favours The Winners in 2009. Highly recommended!

Check out Conversations with The Caretaker 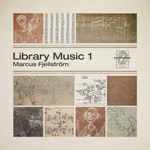 Marcus Fjellström first appeared on my radar after his 2010 release on Miasmah, titled Schattenspieler. His dark, moody and always beautiful passages quickly captured my attention and remained at the top of my rotation queue. Appropriately, Schattenspieler appeared on Headphone Commute’s Best of 2010 : Music For The Film Behind Closed Eyelids. Needless to say that I was pretty excited when I received a personalized copy of his latest, self-released album, Library Music 1. Inspired by “the classic old music libraries used for TV and low budget movie productions in the 1960’s and 1970’s, as well as the curious early electronic experiments of Raymond Scott and the BBC Radiophonic Workshop,” Fjellström created 18 short vignettes covering a range of of experimental electronic and home listening genres. The pieces are short for a reason – their fragmented nature draws an image of a ripped patches of musical cloth that are then stitched back together at irregular angles, shaping a colorful sonic blanket for a cold winter night. Taken in as one cohesive project, the album becomes a score for an obscure vintage film – carnival memories, circus dreams, and cinematic fantasies are all collected in this library of hazy, deliciously dissonant, and ghost friendly loops. At times a little gray and eerie, the music cuts through dusty grooves of gritty recordings, like a soundtrack to a surreal life kidnapped by an eavesdropping composer. Perfect for your own “Malice in Wonderland” head trip. Make sure you pick up Fjellström’s earlier releases, including above mentioned Schattenspieler as well as Gebrauchsmusik, released by Lampse in 2006. Library Music 1 is available from Fjellström’s own Kafkagarden. Based on a hint from the album title, let’s hope there is a volume two in the works!

Read Two and a Half Questions with Marcus Fjellström 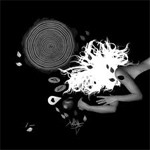 I initially intended to review this compilation by Demdike Stare along instrumental hip-hip and West Coast Brainfeeder style producers. Ranging from hypnotic beats, to dubbed out rhythms, to eclectic ethnic sounds, the duo of Sean Canty and Miles Whittaker have been turning heads since their release on Modern Love, titled Symbiosis (2009). But it is their take on dark ambient and experimental soundscapes that makes this collection of their recent output perfect for this edition of Sound Bytes, exploring the topic of hauntology. As the title suggests, the 23-track 3xCD (and 3xLP) release compiles Demdike Stare’s three previous albums appearing on Modern Love: Forest of Evil (2010), Liberation Through Hearing (2010) and Voices of Dust (2010). Let’s start with the name: Demdike was the alias of Elizabeth Southerns, who in 1612 was one of the ringleader of the Pendle Witches. As such, her “stare” (and the sound of this record) is mystifying, hypnotic, and inevitably lethal. On Tryptych, Demdike Stare indeed dances with the devil, bewitching the listener with incredible creativity in springing dead music back to life. Brooding drones, minimal beats, and crackling grooves cut through the darkness of unearthly atmospherics seeping from the fog covered cemetery of abandoned vinyl. The duo is masterful at crate digging, reviving records and their ghosts from past generations for one more spin and dance. Deeply imbedded with associations of Finders Keepers and Modern Love the group not only has their finger on the pulse of evolution of sound, but is engraved in the world of obscure and collectible sound. At over 160 minutes long, the sample-based selection of archival sources is a highly recommended release for followers of everything mysterious, occult and esoteric.