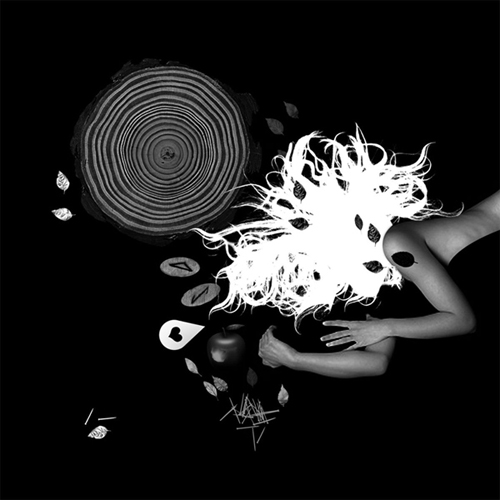 I initially intended to review this compilation by Demdike Stare along instrumental hip-hip and West Coast Brainfeeder style producers. Ranging from hypnotic beats, to dubbed out rhythms, to eclectic ethnic sounds, the duo of Sean Canty and Miles Whittaker have been turning heads since their release on Modern Love, titled Symbiosis (2009). But it is their take on dark ambient and experimental soundscapes that makes this collection of their recent output perfect for this edition of Sound Bytes, exploring the topic of hauntology.

As the title suggests, the 23-track 3xCD (and 3xLP) release compiles Demdike Stare’s three previous albums appearing on Modern Love: Forest of Evil (2010), Liberation Through Hearing (2010) and Voices of Dust (2010). Let’s start with the name: Demdike was the alias of Elizabeth Southerns, who in 1612 was one of the ringleader of the Pendle Witches. As such, her “stare” (and the sound of this record) is mystifying, hypnotic, and inevitably lethal. On Tryptych, Demdike Stare indeed dances with the devil, bewitching the listener with incredible creativity in springing dead music back to life. Brooding drones, minimal beats, and crackling grooves cut through the darkness of unearthly atmospherics seeping from the fog covered cemetery of abandoned vinyl.

The duo is masterful at crate digging, reviving records and their ghosts from past generations for one more spin and dance. Deeply imbedded with associations of Finders Keepers and Modern Love the group not only has their finger on the pulse of evolution of sound, but is engraved in the world of obscure and collectible sound. At over 160 minutes long, the sample-based selection of archival sources is a highly recommended release for followers of everything mysterious, occult and esoteric.