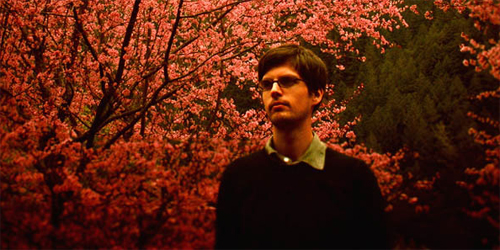 In our last interview, you revealed that the compositions behind the Goldmund moniker are “basically just solo piano”, whereas your Helios output is “song structure and electronics, guitars and beats”. I have to ask, what prompted you to release this album under your real name?
I chose to use my own name because it was sort of a mix of different material and didn’t fit comfortably into any one moniker, so with the scores for films that I’ve done I’m just kind of lumping it into one name. There are cues that sound like Goldmund, and there are some that may sound like the more ambient material of Helios, but then there are some others that don’t fit in with either.

I also recognize a few of the Goldmund pieces that previously appeared on Famous Places and Corduroy Road. How did these selections make it onto The Last Survivor?
The directors had used some existing Goldmund tracks from Corduroy Road as temp music for the film initially and it ended up working well so we left it in there and just did some editing and whatnot to match it to the film a bit better. While doing the film I was also working on “Famous Places” at the same time, so those pieces kind of overlapped where I would take a song I was writing for the record and expand it or edit it to fit the mood of the film.

I know you have composed scores for film before. Tell us how you got involved with this particular project.
The directors, Michael Kleiman and Michael Pertnoy, were fans of my music and had put a lot of pre-existing music of mine to the film while they were editing but also wanted to have quite a bit of music composed specifically for the film. They called me up and we chatted a few times and it seemed like we were all on the same page about the musical direction for the film. It was a really fun process and they were very easy to work with and clear about what they wanted.

How were the pieces composed? Were they written for specific scenes in the film? Did you have the particular characters and their experiences in mind when you were writing them?
The directors and I talked at length about what they wanted for specific scenes, so they would give me an idea of how they saw the mood/tempo/instrumentation for a scene and I would go to work at interpreting it from there. The film was basically already shot, so I had the scenes to work from. Each one of the characters in the film had gone through a lot of personal struggle, loss, disintegration / redefinition of their own culture, and family so the overall mood of the music as a whole ranged quite a bit but was meant to be quite emotional and highlight their own stories.

Your Mint Julep project with your wife, Hollie, has an entirely different sound from your other output. Tell us about the recent Adorn EP.
Yeah, my other projects, Helios and Goldmund are somewhat similar in that they quiet and instrumental, but Mint Julep is more of a rockish/electronic project that Hollie and I have been writing for a few years and is quite different. The songs have a lot of layers, is a little more aggressive and beat-driven and Hollie sings on all the tracks, so it’s a bit more song-based. We just released a little EP with a few tracks which folks can buy via my website, and later on this year our full length, “Save Your Season” will be out. We’re excited about it; it’s been a fun process for both of us to do together.

How do you find the time to work on so many different projects?
I think if someone’s committed to something they tend to make the time for things when they can. I’m no good at sitting still, I’m best when I’m busy. I enjoy what I do, I work on a lot of different projects, but I like the challenge and the reward even if it means staying up all night and walking around like a zombie the day afterward.

I’m sure you’re cooking something else already… Care to share your upcoming releases?
Along with the new Mint Julep LP, I’m releasing a Goldmund album featuring arrangements of American Civil War folk songs called “All Will Prosper” on Western Vinyl; it’ll have some acoustic guitar and my brother is also playing upright bass on a few tracks, but it’s still essentially piano-centric. Also I’ll be putting out an album of remixes of my Helios material by other bands that I will release on my own label, Unseen, sometime mid-year. It’ll feature a lot of friends and colleagues who I’ve gotten to know over the years; folks like Ulrich Schnauss, Jon Hopkins, Hammock, Arms and Sleepers, Rafael Anton Irisarri, Ben Lukas Boysen (Hecq) and several others, and I’ll be putting on some unreleased material of my own. After that I’m working on a more ambient Helios album called “Somnus” hopefully also out later this year.