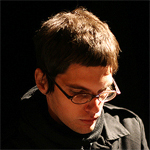 I’ve received a warm response from all the artists and labels for their Reflections on 2009. Keith Kenniff, who is known to many of you as Helios, Goldmund and Mint Julep, compiles his top 10 favorite albums of the year. Each entry is accompanied by a unique commentary from Keith himself. This is yet another glimpse into this wonderful artist’s mind, for a view on music from his perspective. Be sure to stop by the soundalong shop to pick up the limited edition CD-Rs of Unreleased tracks, and recordings of Live at the Triple Door performances.

1. David Bazan – Curse Your Branches
I’ve been a huge fan of David ever since his days in Pedro The Lion. His solo material has touched me just as much as his earlier work, and I think in some respects it’s a lot stronger. Excellent writing, musicianship, honest delivery and a thoughtful exploration into his recent loss of faith. Having seen these songs earlier in the year at a few house shows (two at my own!) I really like the arrangements with the full band as well.

2. Ten and Tracer – Tsotsitaal
Jon Canupp has been a good friend of mine for years, and I am always pleased to hear new music from him. After listening to this album I promptly had it ready to be accessed at any time; I found it to be one of the most solid ambient records in recent memory. In the vein of Stars of the Lid, but with Jon’s own personal touch of brilliance. Check out the track titles… excellent.

3. Taken By Trees – East of Eden
A superbly written, mixed and played album by Swedish singer Victoria Bergsman. The album has a kind of quirky indie quality to it, but with a really interesting middle-eastern/indian influence that I think works extremely well.

4. Howard Shore – Doubt OST
Howard Shore does it again by pulling off yet another incredible film score to a wonderful film. The subject matter being very powerful itself it was refreshing to see Shore’s subtle string arrangements quietly highlight this film and give me plenty of goosebumps in the process.

5. Propagandhi – Supporting Caste
One of my favorite punk bands from my youth is still plugging away, and have not lost a bit of intensity. Their music has been the soundtrack to my anger and discontent since 1994 and Supporting Caste is the finest album since that time period. Blazing guitar riffs, lots of yelling and social commentary? Yes please.

6. Nutid – S/T
I was made aware of this album by a friend of mine and it quickly made it’s way to my regular rotation this year. The music can best described as cinematic, but less Hans Zimmer and more Michael Andrews (ala Donnie Darko). Each track seems to have a distinctly different feel to it, very lo-fi and understated yet quite unique and original. Thoughtful and quirky, often short pieces, it’s a great soundtrack to a multitude of my daily situations.

7. Ben Frost – By The Throat
Ben Frost… thank you. I can only say that this music offers companionship to any kind of anxious, fearful, or strangely disturbing surreal dream that I’ve had in recent memory. Challenging and extremely rewarding, complete with samples of howling wolves and some Ghostbusters references.

8. Washed Out – Life of Leisure
Like an old worn out pair of jeans that have sand in the cuffs. Wonderful EP that took me by surprise and left me wanting more of Ernest Greene’s ridiculously compressed reverbedbeach blanket bingo-electro-shoegazy-freaked out songs.

9. Nils Frahm – The Bells
I suspect Nils is soon to be a regular name, and with those who have been privileged to hear his music he is already making a huge impact. This album was recorded in a cathedral on a beautiful grand piano, and contains a compressed night of improvised music on solo piano. Fellow astounder Peter Broderick was on hand to capture and lay witness to this glorious night of music. Fans of Arvo Part, Max Richter take notice.

10. David Darling – Prayer for Compassion
David Darling first came to my attention with his unbelievable album “Dark Wood” on ECM many years ago. A good deal of of his albums have accompanied me in the air, in the car, reading and studying. This album may teeter on the edge slightly too far into new age territory at times, but I let my guard down and am glad I did. Wonderfully mixed, and thoughtfully played as usual, Darling’s positive message and humanity continues to wash over me and make me feel alright again.