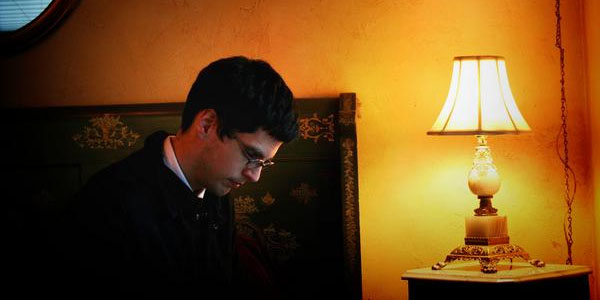 Do you have a clear (or imaginary) line for deciding which compositions belong to Goldmund and which to Helios?
It’s a pretty clear line for me; the Goldmund material is basically just solo piano, and even though I use some piano in Helios, there it’s more centered around traditional song structure and electronics/guitars and beats. The Goldmund material is written and recorded very quickly, and there is a lot of improvisation involved; but the Helios material is really detail orientated, and usually is pretty measured, compositionally.

You seem to be releasing under both aliases around the same time. Does that mean you’re working on completely different albums in parallel?
Pretty much, I wrote a bulk of the albums at the same time, and it just happened that they both got finished just around the same time, so myself and Type records decided to put them out pretty close together.

What piano were you playing on The Malady Of Elegance? Is it the same one you have at home?
Yes, that was all done on my parent’s piano at my old house in Pennsylvania. Every time I visit, I get the opportunity to record some; I’ve never owned my own piano, unfortunately.

Tell us a bit about the process of setting up a piano for a recording.
My main goal for the sound of the recording is to capture it as it sounds when I’m sitting behind it, so I hear all the squeaks and the fingers hitting the keys and I wanted to try and replicate that as much as possible. I really wanted it to be very natural sounding, so even though there is some very light ambient bits in some of the background, the piano wasn’t processed, or prepared, except for some eq. I just generally throw two AT 4047A’s (the quietest mics on earth) up at either end of hammers and try and get them as close as I can inside the body of the piano.

Who are your favorite classical and modern/contemporary classical composers?
I’ve been really enjoying William Schumann and Roy Harris a lot lately, also I’m constantly drooling over anything by John Adams that I can get my hands on. And Nico Muhly’s score to the film “Joshua” is amazing.

Tell us about your upcoming release for Helios.
The album is called Caesura, which basically means a break or pause/silence (in poems and such). It’s more similar to Eingya, than the Ayres EP that I did in 2007; it doesn’t have any singing except for my wife, Hollie’s lovely voice on a few of the tracks. It’s less traditionally ambient, in that all of the tracks are primarily beat-driven, with pretty similar song-based structures. It’ll be out in November (probably by the time you’re seeing this interview) on Type Records again, which I’m honored to be on, it’s a lovely label.