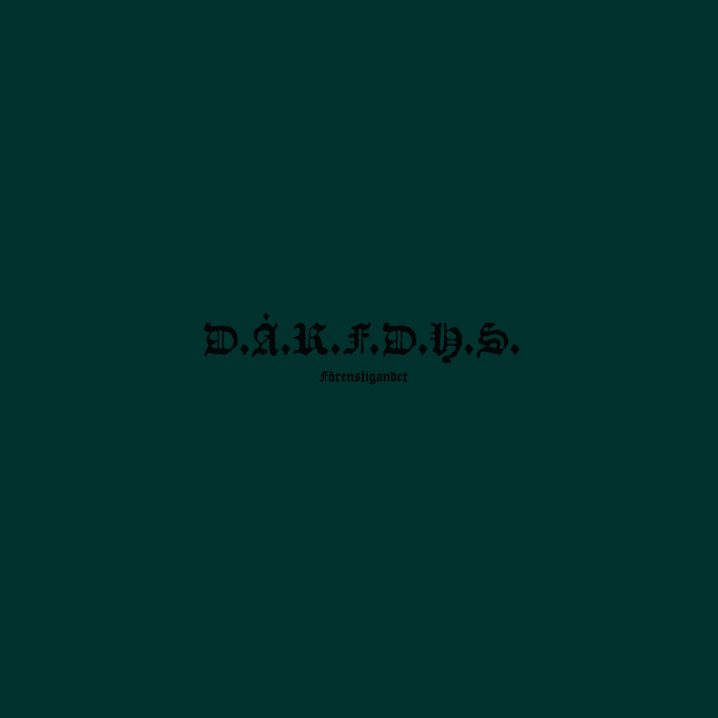 Here’s to the names I can’t pronounce! And as if that wasn’t enough, D.Å.R.F.D.H.S. appears to be an abbreviation, an acronym of sorts, for the project by the Swedish duo, Jonas Rönnberg and Michel Isorinne, its full name being Dard Å Ranj Från Det Hebbershålska Samfundet, the meaning of which evades even the most sophisticated of translation services (if you know what that means, let me know). What we do know is that Rönnberg is also the man behind Varg, one of the main acts on Abdulla Rashim’s Northern Electronics roster, while Isorinne also records as Dystopiska Visioner. The two create a particular flavor of hiss-induced, drab techno, layered with abstract isolationism, experimental ambiance and bleak haze.

Förensligandet is one of those records that you must let in all on your own. If you’re not prepared for it, it will simply run over you, and you’ll be left broken, in the puddle of something lukewarm, wondering why I ever even recommended this release. But if you open up your windows while it’s pouring outside, and let the incense smoke mix in with all that vapor, the cold darkness of this ‘northern sound’ will at once feel welcome, needed, and nice. The contrast between its gloomy distorted rhythms and cassette-warped beatless atmospheres draw a beauty, so rarely found in all the crudeness of our lives, where our own humanity is obscured by cruelty, so often drowned in the lack of sounds like these. But peel the layers away, and something glimmering shines.

Such is the case with “Hedvigstad”, a subdued sub-bass rumbling, textural being, which slowly envelopes the dwelling from which it’s born, gracefully crawling from within a post-techno sonic construction, carefully approaching “Norr om Uppsalaslätten”, a Nordic architecture of modular synths, drum machines and impeding terror. Landing on the planet that is Förensligandet one is left stumbling through the desolate terrain of dreary weather, suffocating in its density every step of the way. This is ambient techno at its finest, approaching sound track quality of imaginary films and suppressed nightmares. And when its grasp at last will loosen, you will surely plead for another defeat. Recommended if you like Demdike Stare, Raime, Silent Servant, Lumisokea, Voices From The Lake and ambient excursions by Anthony Child, Sandwell District, and Vatican Shadow.

[p.s. The name roughly translates from Swedish to “Pain And Suffering From The Hebbbershålska Congregation”. It’s an homage to the Swedish author Nikanor Teratologen (real name Niclas Lundkvist), with Hebbbershålska being a fictional place in his works.]