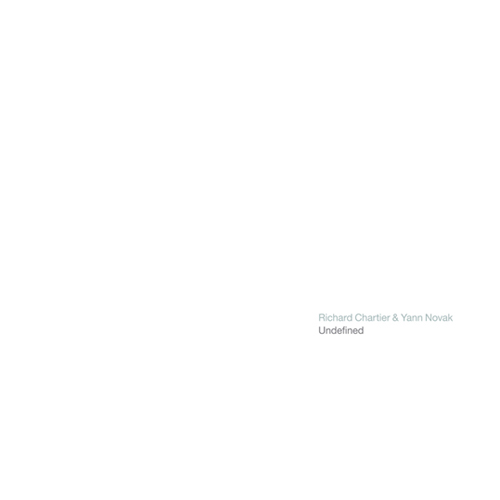 I fall in and out of love with drone. I suppose one should be safe when consuming such things in moderation. There are times when the barely audible reductionist tonalities are exactly what my fuzzy mind requires. And of course there are times when after a while, there’s simply just too much. On this particular occasion [ok, I’ll admit, I’m a little bit stressed out], I’m definitiely in need of a headcleaner. And so I turn my attention to the latest release from two of my favorite artists in the genre, collaborating for the very first time together: Richard Chartier and Yann Novak. First of all, let me congratulate the two on finally working on a collaborative release – it’s always a pleasure to see two great minds come together and produce something that each can be proud of alone. Even if this particular collaboration is a bit less defined.

“The piece began with Chartier creating an unfinished work and sending it to Novak with no explanation, just the instructions to add to it, subtract from it, or a combination in order to finish the piece. Novak was then to send the recording back to Chartier for a simple approval or rejection.Undefined is dedicated to the uncertainties of Los Angeles where Novak has lived for the past 4 years and Chartier is currently relocating.”

Undefined is a truly somber work. If extreme drone and minimalism are your thing, then you’re in for a treat. Oscillating in the mid-range frequencies, the tones remind me of a Tibetan singing bowls or reverberating crystal wine glasses. At times a higher pitch will enter the stereo-field, cycling between the channels, simulating a self-inflicted tinnitus via its sonic hallucination. The forty-minute piece feels warm and analog in timbre – like a soft wind blowing over a modular synth. A closer listen may reveal a few more additive sounds, but then again you may be simply hearing things that are not there as you’re slowly pulled into a tunnel of void…

I wouldn’t suppose that if you’re reading this, you’re new to Chartier’s work. As one of the pioneers in microsound electronic music, Richard Chartier has taken his minimalist works to the extreme, with a vast catalog of releases on 12k, Spekk, Room40, Raster-Noton, and of course his very own LINE and 3particles imprints. Besides Novak, Chartier has recently collaborated with Robert Curgenven on a piece titled Built Through (Line, 2012), as well as William Basinski on Aurora Liminalis [Line, 2013]. The latter is a personal recommendation, and an absolute must for this year.

Novak spent over six years running his own Dragon’s Eye Recordings, until in 2012, after 60 releases, he put the label on hiatus. That doesn’t mean that Novak has stopped making music. After his first appearance on Chartier’s very own Line in 2010 with Relocation.Reconstruction, Novak released albums on hibernate, Unfathomless, and Murmur Records. For Undefined, it was decided to go with an Italian “media-network” called Farmacia901, a label which concentrates on “minimalism, music as design, and sound as malleable material”, on which Novak has already published Blue.Hour in January of 2013. Undefined is Farmacia901’s only 10th release, and it already managed to snatch some of the scene’s superstars. Well done!