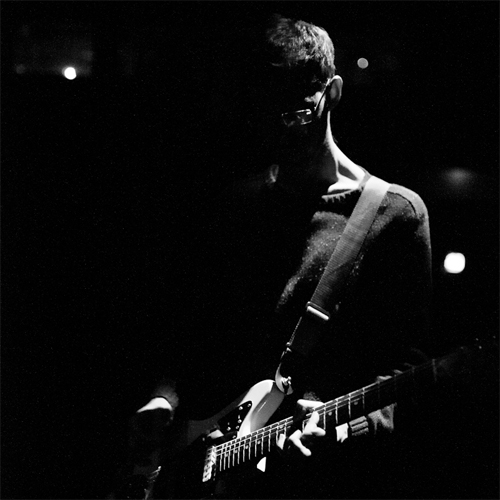 You’ve been working on a lot of different projects in the past, what finally prompted you to release a full-length album under your real name?
It was mainly at the suggestion of someone else actually. I’d been recording under the name Sketches for Albinos for a few years, and the music I had in my head really no longer matched that aesthetic or feel. It didn’t make any sense to keep working under that name. It’s also nice not to be hiding behind a moniker or other identity, and to really put yourself out there in a raw kind of way. There’s also my own battle with the word ‘composer’, which I now feel comfortable describing myself as. I think the word needs to be re-claimed from the ‘classical’ sense of the word, as in someone who works with traditional instrumentation and writes out sheet music. For me Burial is a composer, as is Chris Watson, David Lang, Michael Gira or Kevin Shields. They use different means and tools but what they create is of equal value and interest.

How would you describe your music?
That’s always a tough one… Guitar and Electronic music always at the edge of collapse, sometimes aggressive, sometimes kind.

Tell us about the process of recording Splintered Instruments.
‘Splintered Instruments’ really started properly when I started work with Ben Frost in Greenhouse Studios. That’s when things started to shape up and all the possibilities in these ideas started to appear. It was kind of like the training wheels came off. After that is was a very slow process or carving up ‘song-like’ structures into something more spacious, but always trying to be highly rhythmic. Much of it was about avoid certain things; not making ambient-music, being ‘rock’ but not… The sound I had in my head was like Sonic Youth’s ‘The Diamond Sea’ meeting ‘Music for 18 Musicians’. I wanted to take songs and kind of dissolve them and then bring them back again, with everything just being on the edge of these various types of structures. I also wanted to record everything to a certain standard which delayed the record a lot. I also distracted myself by focusing on a lot of extraneous details rather than the core of the music sometimes; it was a real adventure making that record, and I learned a huge amount. I also worked very closely with Paul Evans, who was an engineer at the studio, on a lot of pretty abstract ideas and recording processes including a lot of ‘prepared speaker’ work which has become a focus of much of my work since. Dan Rejmer also mixed the record like a king, so there were a lot of key people and valuable inputs along the way.

Talk a little on the physicality of sound in your compositions.
Physicality in sound is something I’ve really become interested in over the last few years. My favourite music is really immersive, in one way or another, in texture, feel, volume; I want to be overwhelmed by it. I also realised that I have to have this in live performances as well, both in terms of volume and physical engagement with the music. I can’t stand and stare at a laptop, I need to hit a guitar, thrash at it (I often end up cutting up my fingers at gigs from this) and have something which physically makes me engage otherwise I just can’t get into it. So I’m really interested in finding ways to do this. I wrote a piece a few years ago which I play live a lot called ‘Elysia’, which is based around the behaviour of sets of side-chained compressors, all controlled from an electric guitar. This way you have to play the guitar really hard to get certain effects from the material, as crushing the material up is the basis of the piece. It becomes a physical experience and performance otherwise it really doesn’t work. I’m really interested in that. After all music sounds and feels better when you move.

You mention that one of the concepts behind the album is a “revolt against machines”. Can you expand a bit on that?
It’s just about trying to use physical objects to process sound. Using broken speakers, or pushing in the cones as drums play through them, or re-recording parts in real rooms rather than using reverb, combining live instruments with multiple takes of themselves etc. Just finding more interesting ways of recording than just using plugins on a computer. Having said that, a lot of my more recent work has been using custom-made software to achieve certain ends, but I’m usually far more interested in real-world sounds than artificial ones. I use the computer so centrally in what I do only out of convenience… If I could do it all on an acoustic guitar, trust I would! I really used machines to assemble giant collages of material on this record, which would have been impossible otherwise. But 90% of the material is from the acoustic, ‘real-world’.

I have to ask this – how did you get involved with Ben Frost?
I lived in Reykjavik for 6 years. It’s a small place, eventually you run into most people. I met Ben through my job at the time, which was a happy coincidence really, as I’d just seen him play at Iceland Airwaves shortly after the release of ‘Theory of Machines’ and been excited by what he was doing. We got to know each other, and I played in his piece ‘Music for 6 guitars’ a couple of times. We look at a lot of music and sound in similar ways so there was plenty of common ground. He liked some demos I gave him and we just started working together, which went on on and off for a few years. He was the perfect person for me to work with at that time, and I’m very grateful for that.

And how did you end up on Fluid Audio?
I had a few mutual acquaintances who knew Dan, who runs Fluid Audio. When I was looking for a home for ‘Splintered Instruments’ they felt it would be a natural fit. Their releases are always works of art, with such quality and time poured into them. I’m extremely grateful for all their hard work and support.

Talk a bit about your other projects, such as Sketches For Albinos and Graveyard tapes.
Sketches for Albinos was a lo-fi/ambient project I had when I lived in Iceland. I issued a number of albums under that name. I still really love that stuff, it’s all very very personal and I’m hoping to return to that project later this year, only it will have to take on a slightly different form. Graveyard Tapes is my project with Euan Mcmeeken. Euan comes from a more traditional songwriting, piano and vocal background and it’s a collaboration based around song-like forms. We recently released a record called ‘Our Sound is Our Wound’ on Lost Tribe Sound, which we’re really proud of and has fantastic artwork by Jamie Mills. It’s great to work with this project as it helps frame some of my experimental tendencies into a specific form, and working with Euan is also a lot of fun.

And what about your sound installations?
I’ve done a number of installations (see some of these here) usually using custom-made software and various ways of interacting with the space, sometimes using light, sometimes hacked game controllers. I really enjoy this type of work as you can really see and instant reaction in people, and you also reach such a broad range of people. That’s really rewarding. I developed an algorithmic cinema project recently with Erik Parr called The Third Mind, which we exhibited as an installation with ‘foley stations’ where the public could contribute sounds into the system in the same way as you would as a foley artist adding additional sounds onto a film. I’d love to do an installation which was based on physicality and a space using infrasound or something similar. Something very meditative from pure sound and guitar amplifiers, bathed in deep red light. Very Lynchian…

What are you working on right now?
The follow up to ‘Splintered Instruments’, which I’m really excited about. I’m really trying to condense and explore certain ideas, such as the relationship between rhythm and texture, but still making something with a sense of narrative, and dare I say it, ‘pop’. Although I’ve been told I have a very messed up idea of what pop music is. At the moment it sounds like David Lang meeting Nirvana, Raime meeting Steve Reich. I’ve also started working with Euan Mcmeeken on the second Graveyard Tapes record, which has a lot of spirit and energy behind it. I think it might be my most optimistic record to date. Also finishing off a full-length record with Dag Rosenqvist (after our EP ‘Wonderland’) and a record of improv-based recordings with Christos Michalakos under the guise Black Isle Corpus. Busy as ever…