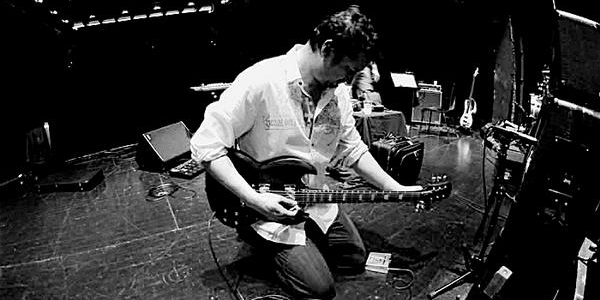 Describe your process of composing a soundtrack.

I am becoming more discerning with my choice of project.Initially,I worked on any job I was offered-primarily for experience and knowledge about film and its music requirements from a composers view…I’ve kissed a lot of frogs along the way but its been necessary to discover,not only how the job is done,but what it is that I CAN do and what I WANT to do.

My preference is for a project that stimulates me intellectually and artistically.Something that I know will bring music out of me that I will be excited about.I have no ‘poker face’,if I’m not ‘into’ a project I can’t fake it and that benefits no one!

I need to immerse myself in a project.I like to be involved from as early as possible,not necessarily to write but to be aware of the project,its background,its needs…I need to absorb it,to know it..this way,when I start writing I have a connection…for me,its about more than the story,the performances…theres an undercurrent of tone and feeling that the music can help,or hinder,and if I don’t connect with that tone the music will be at odds with the film,and we don’t want that!

How did your production change since the times of Pop Will Eat Itself?

Technology advancements have opened up many new doors since those days-its been nearly 15 years since I left PWEI.However,its fundamentally the same idea,but,for me as a computer-based ‘musician’ CPU power and software development gives more options and easier(in theory!)execution.

Also,you can never under-estimate the power of experience.Having been writing music for nearly 30 years has allowed me a certain confidence and discipline in not fighting the process too much.I had the worst case of writers block just before I scored Ο€and the problems were enthusiasm,desire and inspiration-I learned that if its not happening,do something else,try something else-if that doesn’t work,do something else…

At some point I stopped trying to make music like other people.Let me explain-I would write a piece of music/song and then analyze why it wasn’t as good as Artist A/Group B/Composer C/whoever…I was trying to shape my music to what was going on a round me.At some point,I let it all go and started to make the music i felt/heard inside me-regardless of whether it was substandard to anything/anyone else.I had to find what was truly in me.

Tell us about your upcoming appearance at the Ghent International Film Festival. How do you prepare your music for a live performance?

I have wanted to perform my film music live from the very beginning and being offered the chance to perform in Belgium gave me the push to see how it would work.

Originally,I was asked to prepare my music for a full orchestra and perhaps conduct.I didn’t feel this was how I perceieved my work and decided I wanted to blend the contemporary side of my sound with the classical by forming a neo-classical rock band,as such,with piano,string quartet,guitars,bass,drums and keyboards.This gives me the most flexible approach to performing my scores.

I re-arranged pieces into palatable arrangements that i felt retained the essence of the music as it exists in the related film but also was suited to the live environment.Its a further extension ofhow I have been arranging my score releases recently-taking the core idea of the film and the score but re-arranging the music into a more traditional(for want of a better word)arrangement that gives an overall listening experience-as opposed to just taking the music out of the film and sticking on a CD.essentially,what I have tried to do with the music is take it on further from the recorded work to another level in the live performance.

Who are your contemporary musical inspirations?

We last spoke back in 2008 and I asked you about your thoughts on releasing a solo album. How is that going?

The general concept of a solo record doesn’t really appeal to me.I need context and the inner workings of myself are just not interesting enough to me to excite me…however,I write constantly so there is always the possibility.

Writing for a film always presents new challenges and ideas that force me to respond in ways I,perhaps,wouldn’t have considered,left to my own devices.Until I jump that hurdle a solo record will remain undelivered….

If it’s not a secret, what are you working on right now?