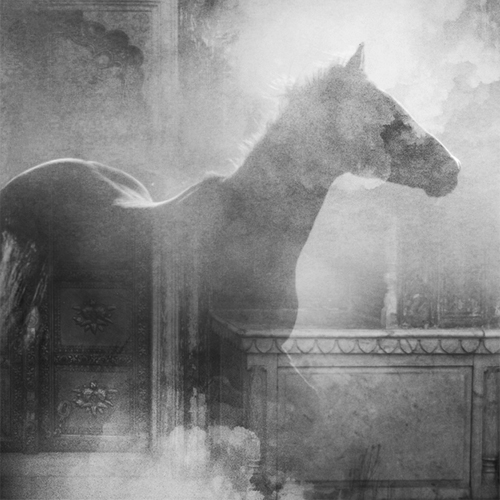 Could you talk a little about ‘The Painted Palace’ and its impact on your creative process?

The first two tracks on Charcoal were created whilst living in Brisbane. There I spent a lot of time alone on the piano under my house, creating very subtle and restrained songs. Having previously suffered from a serious case of epic-itus, I was very cautious not to get too carried away with the sound I wanted for the album. On a whim, I decided to move to Melbourne and whilst being ‘between homes’, I took the opportunity to explore a range of different sub-cultures and living spaces. A particularly unforgettable experience involved squatting in an abandoned office block with a bunch of anarchists who played live-action zombie role-playing games in the maze of graffiti-spattered hallways. Due to this bout of ephemeral living (sometimes without electricity), I must have mixed the album tracks in at least 10 different locations, which was often quite problematic and progress was slow. I remember one time, I had found the perfect library, it was so peaceful, I had my gear all set up and ready to go with soft ambient music playing in my headphones, when suddenly, a great choir of toddlers creeps up from behind, chanting bizarre and barely intelligible things about spiders and waterspouts! That harrowing experience put me off libraries for a while. You’d think they would be the perfect place to mix an ambient album, it’s just turning pages mainly, perhaps a footstep here and there, but when it’s a hundred people furiously turning pages and you already have several texture tracks in the song you’re currently working on, it’s not exactly ideal.

Eventually, I found my way into a house where the vibrant walls, art and people were quite indiscernible from one another. I had reached The Painted Palace, and it was to become the mise-en-scène for the remainder of my album. I could perhaps call the time I spent there, my ‘Belle Époque’. We were a collective of political and artistic misfits, often seen travelling bareback on bicycles, in a V formation, through the streets of Melbourne. Our baskets, more often than not, teeming with copious amounts of found fruit and vegetables. Living so closely with such a heterogeneous cluster of people introduced me to many new and thought-provoking perspectives. I became more aware of my privileged status as a white male human and aware also of my socially-constructed presuppositions which guide my actions on a daily basis. Of course, due to these personal changes, Charcoal grew and shifted in unexpected ways, and I feel that each track is markedly different from the next. The hardest part resided in album coherence, as I often found a new song was heading in a direction that would be incongruous with the album as a whole. I feel the finished article is a compromise between my desire to create sleepy soothing songs and my ever-increasing interest in a more abstract and aberrant sound palette.

Charcoal strikes me as a very personal work. What sort of experiences/imagery were you drawing on when writing it?

Spending nearly as much time on visual art as I do audio, I find that one cannot exist without the other. Whilst producing a track, I am usually trying to recreate a certain mood found in a particular piece of artwork that has inspired me. For Charcoal, it was always black and white photography. Sometimes I would cycle through photographs whilst producing a track to make sure I was getting the right feeling or atmosphere. So in a way, the album is an audio translation of the artwork I enjoy, the stuff that elicits the strongest emotional response from me upon viewing.

Literature has always been a great source of inspiration also. For example, the opening track, ‘To Speak Of Solitude’ is practically a score to a scene in the book Steppenwolf, where protagonist Harry Haller is walking the streets at night, with footsteps falling upon moist pavements and street lamps glimmering above.

The album has a very striking sound design. How do you go about achieving this?

The instruments heard are a mixture of my own recordings and samples. Some of the instruments that I have played and recorded include piano, cello, acoustic guitar, saxophone and melodica.

The textures and details include my own field recordings and some samples sourced from old Musique Concrete records.

Details come from things like small objects dropped onto metal plates, old and broken electronic instruments, microphones inside paper postage bags and more obvious things like the howling wind and birds fluttering. At the end of Arête you can hear creaking which involved putting a microphone underneath a couch and rolling all over it with three dogs.

Is this a one off for you or do you have plans for a follow up?

I do indeed have plans for a follow-up album, but the concept I have in mind is going to be very time consuming, so who knows when it will be finished. In the meantime, I am a few tracks in to creating an EP to be released next year. I am also beginning another project via iambrambles.com – It will involve different art mediums feeding closely off one another (Art, music, literature) and will eventually include collaborations with other artists.

Be sure to read Headphone Commute review of Charcoal