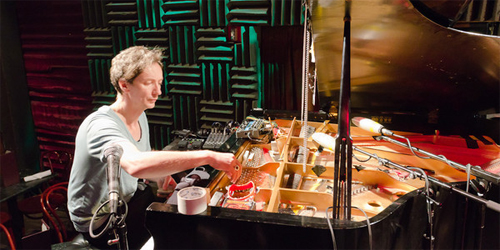 Walking into Joe’s Pub at The Public Theater of New York, I have to sneak in past the security guard, past the gathering crowd, past the box office receptionist, in through a carelessly propped open back door, in towards the dark seating room of a restaurant slash bar slash performance, where I am due to meet Volker Bertelmann for a quick Hauschka interview before his show. Through the thin veils of the projector’s red lights I see a figure slouched over a grand piano, operating on the innards of the instrument awaiting its transformation for the performance. Like an evil scientist working on his new creation, Volker is busy preparing the piano, inserting foil wrapped cardboard, wooden clips, and fabric dampers between the strings, testing out the newly augmented sound with a few strokes of the keys. On the inside of the piano, next to the hanging pearl-like ornaments there’s a bag full of marbles. Finally it hits me: I am watching Hauschka prepare his piano! An act witnessed by only a few prior to the show! 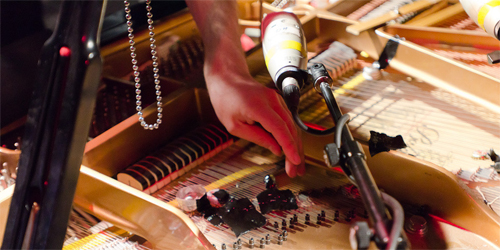 In the green room, Volker attempts to gather last minute information through a flaky wireless connection, and I get to briefly meet his drummer, Samuli Kosminen, a percussionist from múm. It feels like Hauschka was only recently on tour, performing pieces from his last album, Foreign Landscapes, released only a year ago.  All this traveling must really be exhausting. “Yes,” Volker confirms, “once I’m finished with a record, I want to present it to the public, and that’s why, since 2007, I have been playing every year about a hundred concerts or so. And although, the positives of traveling outweigh the negatives, I still think I need a little break, which will finally happen this summer until the end of the year. There will still be releases in between, but at the same time I will try to concentrate on more music for film, theater and studio work.” 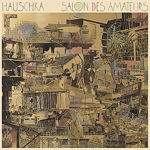 On Salon Des Amateurs, Hauschka explores a rhythmic structure of every piece, often within a four/four beat, always centered around his light piano melodies, occasional string accompaniment by Joey Burns on the cello, Bernhard Voelz on the trombone, and the above mentioned Samuli Kosminen on the drums. This is the same good ol’ Hauschka we’ve learned to love, but with an upbeat feel. In fact, Salon Des Amateurs really feels like an extension to Foreign Landscapes. “Well, they were two records that I wrote at the same time. Whenever I wrote a score for Foreign Landscapes, in the evening I would sit down and create these club oriented beats. I really thought that it’s something that has been missing for a while. So there was always this back and forth switching between the two worlds. In the end, I composed about 40 songs and had to decide if everything should be on one record or separate. I’m glad that it was separated, because Foreign Landscapes encompasses a very melodic, classical and experimental world, while Salon Des Amateurs seems to affect more of the electronic music crowd.” On the perceived departure from his staple prepared piano sound, Volker continues, “It’s actually not a departure for me at all. It’s been in me all this time. And when you listen to my older records, you should hear an approach to dance music, with electronic sculptural music and texture, and of course, classical music as well.” 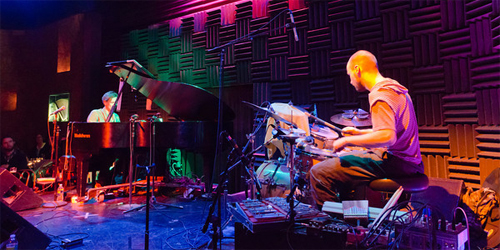 On the stage, Hauschka plays on the keys, while bells, clips and metal objects resonate along with the vibrations. Ping-pong balls are flying up in the air when the piano hammers connect with the strings. Samuli seems to be dancing with his drum kit, brushing on the snare, and moving in rhythm created with his entire body. A certain energy transfers between the players, moving back and forth among percussion instruments, and finally leaking into the crowd. I put down my drink and start tapping on the table with the infectious beat. Soon, the entire room is bopping their heads up and down along with the rhythm. Here’s the true beauty of a live performance – music is actually created right in front of you.  “I feel that a live performance is there for creating new material on the fly, and give people the excitement of experimentation, risk and danger at the same,” Volker adds.

Salon Des Amateurs is actually named after a a cafe/bar located in the Kunsthalle museum of Düsseldorf, Germany. Volker explains some more, “It’s supposed to be a coffee place for the museum visitors. But the place is a little bit dark, and people don’t really want to have their coffee there. So instead, they come there to dance and listen to poetry readings. I’m really glad that Salon Des Amateurs exists, because there’s not much in Düsseldorf that has such a wonderful program, free open space, and a buzzing atmosphere.” Salon Des Amateurs is released on the wonderful FatCat‘s offshoot, 130701. This sublabel continues to excite our neurons with the latest signing of Dustin O’Halloran and the latest release from Jóhann Jóhannsson, both of which, I’m sure, will show up on Headphone Commute’s pages very soon! Make sure you check out Headphone Commute’s reviews of Hauschka’s Foreign Landscapes, Ferndrof, as well as our past Interview with Hauschka.