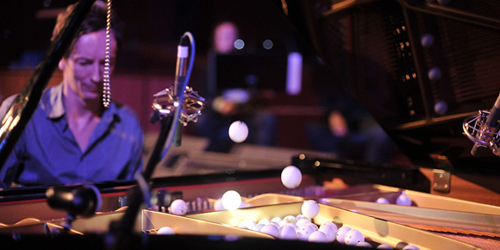 Hey Volker. We last spoke after your release of Ferndorf, where you introduced a few stringed instruments into your music. On Foreign Landscapes you took on an entire orchestra! Tell us how this collaboration has evolved.
Oh i think with twelve people it is a small orchestra, and i am really happy that i could work on my ability to compose something out of my head. I always had the idea after doing so many improvised concerts and recordings, to work more on the parts that i don’t know so well and arranging and composing for a big ensemble was something i never experienced. it is also a matter of having trust in yourself that you can transfer ideas into a group where it is out of your control when it is played… but it isn’t as soon as you work with them. i was fortunate to be able record with the wonderful Magik*Magik Orchestra from San Francisco who helped me to get the best result in a very relaxed atmosphere.

Talk a bit about the process of composing for this orchestra. How different is your approach from working on solo piano compositions? How long did it take to put together this ambitious score?
It is different, as you must have everything ready when you go into the studio and the composition must be already perfect, once you press the record button. with my solo pieces i trust my intuition, which i think is a wonderful strength but different. my solo piano pieces are mainly based on improvisation and spontaneous output. with a composition, you have to shape it beforehand. i started in the spring of 2009 with the first piece and when i had all the drafts together, it took me about 6 weeks to finish the arrangements. the recording was done in 5 days.

Foreign Landscapes is influenced by the places you have visited during your past extensive touring, and I see that you’re on tour once again. Talk a little about this aspect of your life, and how it affects your direction as a composer (as opposed to a bedroom musician with little interaction with audience).
I think traveling in general makes you wider in terms of your perspective on people, culture and a variety of thoughts. it creates an atmosphere that is hard to achieve in your bedroom and gives you an enormous amount of input through impressions, which doesn’t mean that the bedroom is a worse place, quality wise. in my home, i can really focus on the essence because everything is sorted and familiar. so in my case i can say the nicest thing is the mixture of both.

How have your live shows changed, now that you’re performing with an orchestra?
I am playing mainly with a smaller group then i recorded with out of cost reasons but my concerts are more planned as the running order is clear beforehand. during my solo concerts i can always spontaneously decide what i want to play.

Now that you have more instruments to play with – any thoughts on preparing them as well?
no …this is actually something each instrumentalist has to try out… instruments are fragile and everyone has a different approach to the instrument. but that doesn’t mean that i could work on something when i am bored.

Do you think you will ever work on a film score? What about theater or ballet? Do you see yourself taking on even more ambitious projects?
i work right now for one year at one of the biggest theaters in Germany and i do live the score to one of the pieces and i am acting a little bit in the piece. for film scores i feel more and more the interest but a lot of people want to do it and i think my music is not the right music for every film. i am open for any project that comes in my mind, it doesn’t really matter if it something that is reaching out for the stars or the smallest project on earth. the only thing is that i want to be attached and i cant imagine to do something only because it is ambitious.

What are you working on right now?
i finished my new album called “Salon des Amateurs” and it will be released in April. It will be a more dance orientated album. i am also working on my first songbook which will have notations of ten pieces of my last three records and explanations and  descriptions of how i prepare the piano. a friend of mine is illustrating everything with hand writing and illustrations and i hope it will look like a script of Chopin… old and full of ideas.