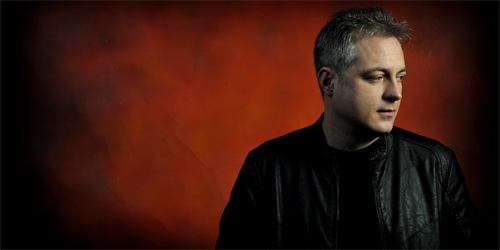 Your 2008 release Humus was an ambient masterpiece sprinkled with elements of electronica and IDM. In addition to synth soundscapes, your latest album features a lot more acoustic instruments. Tell us a bit about that progression.
In my works I have always tried to find the right balance between acoustic sounds and electronic sounds. The tracks of my previous album, “Migrations ” and “Humus”, consist of different themes played with acoustic instruments (piano, guitar, harmonica, flute, strings, sometimes even my voice), but each sound has been processed and loaded with effects. In “Time Elapsing Handheld” I choose to make my compositional approach clearer, by leaving the acoustic sounds mostly unchanged. Electronics give no limits to the creativity of a musician, but I think warmth and vibes of acoustic instruments are unique. That’s why mine is a constant research for compromises between acoustic and electronic.

Where are some of the field recordings from? Is that windshield wipers I hear on “Later, Earlier”?
Most of the field recordings have been captured in rural contexts, in Central and Southern Italy. I’m glad you asked me this question about “Later, Earlier”. I was in a little town near Terracina, at a friend’s house on a hill. We were outside at night. Suddenly I hear a sound that repeats regularly, like a crafted loop. I asked my friend where that sound came from and he replied that it was a bug! I could not believe my ears. That sound had an incredible rhythm. I took my MicroTrack recorder and I captured it. I still do not know what kind of bug it is, but the sound you hear in “Later, Earlier ” was not manipulated at all, it is exactly as is.

Tell us how you came upon collaborating with Simon Scott on “Made to Give”.
With Simon we were in contact to explore the possibilities of live performances to propose together. The collaboration came about spontaneously. We started working on a draft that slowly took shape and became “Made to Give”.

Let’s talk about “time”. First of all, what does the name behind the album “Time Elapsing Handheld” represent?
The concept behind it comes from a dream I had. In my dream I had a little time handheld that allowed me to make short time-jumps (10-15 minutes). When I woke up I thought that such an handheld would be precious for the human beings. Imagine you’re stuck in the traffic: you just press a button and you’re back home relaxing on your sopha. Imagine you’re attending a very boring meeting: just press the button and you’re suddenly in the bar drinking an after-work beer with your friends. Maybe people would be a little bit happier… And I thought that, after all, music is a sort of time elapsing handheld because while listening to it you get completely lost for the whole length of the album and when you “wake up” you realize that music gave you the capability to “freeze” a certain moment of your life and to “wake up” in a different situation, with a different mood and with different feelings.

What are your thoughts on passing time, and what are the proper tools for altering its perceived rate?
We all would like to stop time, but in certain situations we would pay to make it go faster. Both factors are obviously impossible to get so we use little tricks to cheat time and altering its rate according to our needs. I don’t think it’s the case to afford deep physical and philosophical concepts and their resulting paradox here but I can tell you that music is absolutely my “time machine”, my main mean to cancel time. The hardest thing to talk about is the effect that canceling time might produce, because if I freeze a certain moment of my life by any means, when I get the clock to start running again my perception is that the clock hands run faster than before…

I can’t quiet make out the abstract cover art of the album. Are these the tools for measuring passed time, like strips of film, old photographs, and magnetic tape recordings?
I believe that any artistic work can be fully appreciated only if we perceive it as the result of a specific moment in the life of the artist. That’s why for any music work I do I usually use titles that are meaningfully related to my life in the exact moment when I was composing it. If a photograph is an image of a given moment in one’s life, a piece of music is an audio photograph of its artist, it’s a frozen moment of his/her inner life. This is true for any piece of arts. I’ve found these concepts and the complex idea of passing time in Valentina Russo’s “Skyline”, an amazing work the artist created with any kind of photographic films. Nothing better than an old photograph can represent the time passing over the years. Even a snapshot, in the exact moment when we look at it, is already irretrievably part of the past, of our lives. Maybe photographs are the most meaningful instruments to alter the inexorable elapsing of time. The shutter captures a moment that was and that is no longer. These concepts are expressed in Skyline through several negative films, including old 120mm films used in our digital era as a forgotten past, gone forever. The photo showing me as a child (included afterwards for the album cover), the autumn leaf are the elements of truth that transcends everything. Beside the concepts expressed by Valentina’s artwork, I believe that the cover image of the album has a great impact. I’d like to use another one of her works as a cover of my next album.

Tell us about your collaboration with Mélanie Skriabine on the music video for “Dorian’s Mirror”.
Mélanie is an excellent lomographer and photographer. She replied enthusiastically to my call for a video based on the language of the body. She interpreted dramatically and magnificently all the concepts (including passing time) behind the track title “Dorian’s Mirror”, inspired by Oscar Wilde novel The Picture of Dorian Gray. Also in this case I’m so happy about her work that I hope that there will be a chance for a new collaboration in the future. Another video will be released soon by the experimental theater group “Acchiappastorie”, but I won’t anticipate anything about it…

Interview with Emanuele Errante by HC. Photography by Silvano Caiazzo.