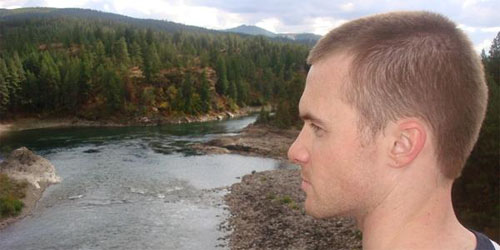 What can you tell us about Priest Lake as a physical location and more importantly, the year 1988 in relation thereof.
Priest Lake is a beautiful lake in Idaho where I spent almost every summer at as a child. These past few years after moving back home from Los Angeles I’ve gone back to Priest Lake and spent the last few days of Summer there. The year 1988 was simply the era of the 80’s that I look back on with the most affection. I was 8 years old and for some reason it seems to me that most of the music that I loved as a kid and that was coming out of that time was just really great. Lots of the cliche’d and played out 80’s sounds were getting fused with a lot of the up and coming 90’s sounds and it was done quite well and felt like a really nice balance.

How do you think, you’ve matured your production for this third release?
To avoid being funny, I’ve actually become quite immature for this release as I really played a lot of sounds on this album that were more youthful and less sophisticated as compared to something like a really deep Eno album. The way I made this album believe it or not was that I recorded an 80’s Hair Metal/Stadium rock album and then pretty much delayed/reverbed and droned the hell out of it. If you heard the initial tracks before the effect treatments were added you’d be listening to an album by Warrant, Poison or Def Leppard!

Do you think you related closer to acoustic or electronic, and where do you think the lines vanish?
I’d have to say Electronic simply because of all of the manipulation that goes on with the various sounds that just can’t really be obtained in a tangible/real world situation. If you were to perform my music live with nothing but acoustic instruments that aren’t treated at all you’d need to have a room the size of Madison Square Garden to get the reverb effect as well as multiple other guitarists to create the chorus/delay effect… etc. I think the line vanishes just at the point where sound manipulation occurs. An acoustic guitar that is reversed I feel takes on an electronic feel since that is just not possible in an acoustic/analog setting.

Who is the protagonist in the movie of your life?
In an existential way of answering it I’d have to say that the state of ‘wistfulness’ would be the protagonist in the movie of my life. I’ve always been a bit of a daydreamer who’s longing for that ‘it’ that is unreachable in this waking life. Now if I had to pick someone of fame, I’d have to say Owen Wilson. Just a laid back funny guy who seems a bit down but somehow finds a way to put a comedic and endearing spin on life and sees the beauty in everything.