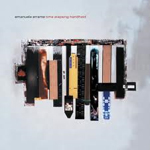 The truth is, I’ve been meaning to review an album from Berlin’s Karaoke Kalk for quite some time now. And it’s not only because some of my favorite artists found a home on this label, like Hauschka for his debut Substantial (2004), Senking for a self-titled  debut Senking (1998), and Dakota Suite for The End Of Trying (2009) and their amazing collection of remix artists for The Night Just Keeps Coming In (2010)… but because all of the unmentioned artists in its roster deserve to be heard. So it wasn’t long before I couldn’t resist talking about this amazing label any longer. Especially now that they signed a long time favorite of mine, Italian experimental musician, Emanuele Errante.

Errante’s music, first introduced to me through Apegenine‘s Migrations (2007), and then Somnia‘s Humus (2008), stands to be in its own sub-category of minimal ambient and experimental modern classical compositions. Lo-fi noises, scratching on the strings of a gently weeping guitar, clicking field recordings, and cascading ambient atmospheres, penetrate through the walls and carpet, raising dust and killing mites (perhaps I should lower the volume a bit). Whether consumed as a sonic installation or an abstract piece of sound art, Time Elapsing Handheld captures the moment with its seven titles, creating a path which is “Leaving The Nowhere” through the “Memoirs”, a bit “Counterclockwise”, sometimes “Later, Earlier”, and always “Inner”.

Lush soundscapes loop and breathe through organic piano tones, guitar strums, and harp plucks, drowning in a generous sweep of synthetic strings, sampled noise, and dripping effects. Centered around the theme of passing time (as the album’s title suggests), the music hypnotizes the listener, bringing him a little closer into the notion of now, and then subsides, letting him simply float among the sounds of rewinding moments. Be still… and feel that… that’s right… Here’s Errante with a few of his own words:

“Time is a relative concept. The recording of a song makes infinite the moment of its execution. But man has not yet succeeded in inventing a device that can accelerate the passing of time.”

The digital version of this release contains two more tracks, “Egostatsy” and “Hidden Sun”. Oh, and in case this review was not sufficient in piquing your interest, it is worth mentioning that Simon Scott appears on the album, collaborating with Errante on a track, “Made To Give”. Highly recommended for fans of Marsen Jules, Deaf Center, Rudi Arapahoe, and Rafael Anton Irisarri.