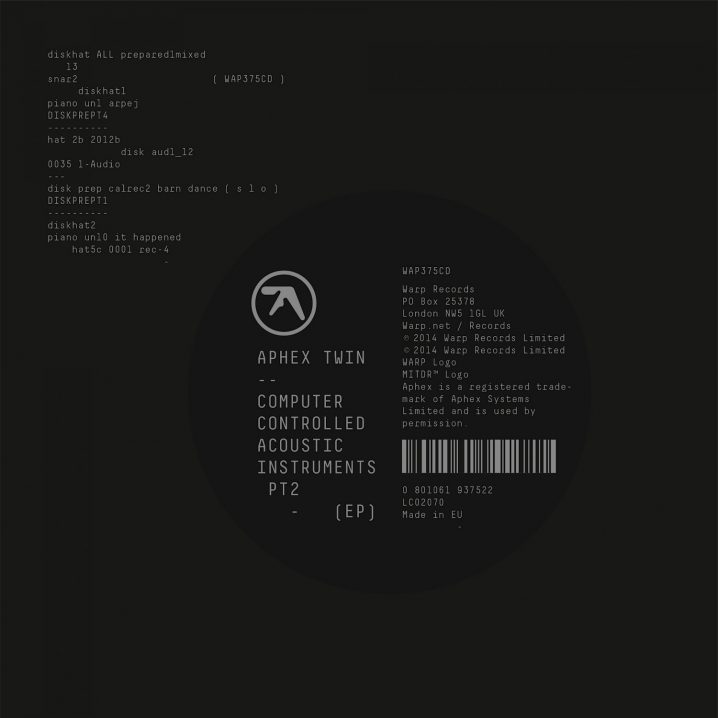 I’ll be honest – at first I wasn’t even going to cover another Aphex Twin release. With so much hype last year, focusing on the return of one of the most influential musicians in the electronic scene, I felt like there was plenty of press around this eccentric figure, from underground to commercial scenes alike. I’m not saying that the publicity was undeserved – the Syro release was fantastic [read Headphone Commute review] – but it felt like the usual AFX standards, a bit like Richard David James just scrapped and remixed a few of his b-sides, left to collect the dust on the shelves post the 2001 Drukqs era.

Then there was massive Soundcloud dump from user18081971, which the entire community reeled from, but with so much material to sift through, how can someone be left reinforced? The account with the 200+ previously unreleased demos has been since shut down, but now appears to be active again (you can still find the entire archive hosted by one of those mega upload sharing sites if it goes away again). Meanwhile, in early January, Warp quietly released an Aphex Twin EP, suspiciously titled Computer Controlled Acoustic Instruments Pt2 – [where was part one?] – but after my first skeptical rotation I was hooked. And here we are!

The EP is a collection of 13 short vignettes, ranging from 9 seconds to 5 minutes in length, on which James appears to play prepared piano, sampling its various sounds and then sequencing them into varied rhythmic pieces. The experimental signature of the arrangements is indeed that of Aphex Twin, but the overall organic sound of these “computer controlled acoustic instruments” propels the sound into that electroacoustic percussive territory, dominated by John Cage, David Tudor, and Arnold Schoenberg.

In the typical Warp fashion, there is not much revealed about the process used by James to compose the tracks – the label has no press release, the album cover and the disk are plain black (I wonder how much The Designers Republic got paid for this), and the titles are the usual garble of abbreviated words, hinting perhaps at the shortened file names, saved and later abandoned: “snar2”, “0035 1-Audio”, “hat5c 0001 rec-4”. A few of online reviews reference a series of constructed mechanical instruments which perform the compositions in the spirit of “musical automata” of Pierre Bastien, but frankly, I’m not buying it (the sound clips sound the same, down to the barely audible clicks at the end of each loop). Let’s hope that I am wrong, and one day we’ll witness a performance of the above, because this music certainly deserves it.

Regardless of its execution, the scratches and plucks still make my neurons tingle, as do the sped up arpeggios walking up a keyboard, as do the sounds of the home-made percussion. I love the honky-tonk of each key, the slap of each hammer, and the ring of each string. The rhythms of the kitchen utensils, or whatever else is the origin of each snare is, create a visually appealing sonic environment, in which every fan of Aphex Twin could feel like a kid again, banging on the sand buckets, filled with future castles of the memories past. And if you sensed a slight hint of negative connotation in these words, I urge you to disband it, because I’ll highly recommend this short EP for every fan of Aphex Twin.

p.s. You should also read this