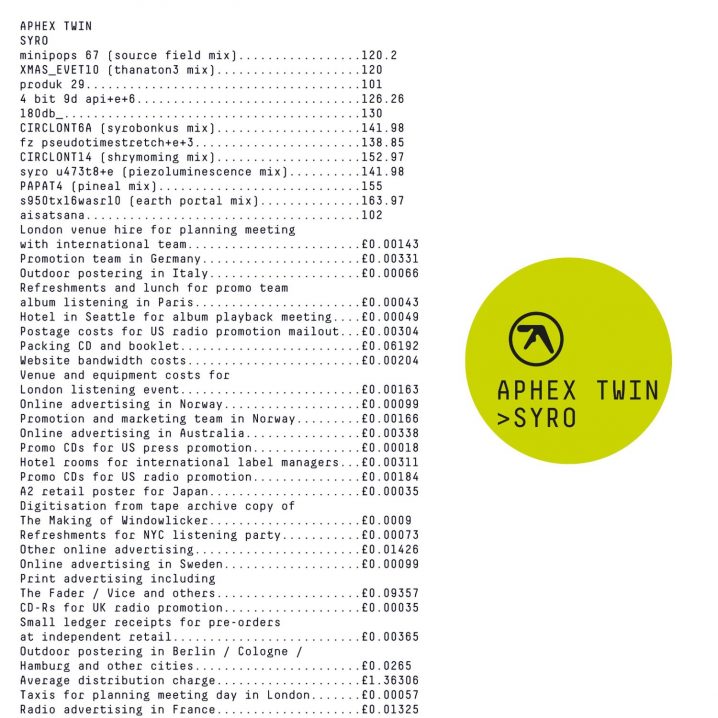 Much press has been made of how long it has been since Richard D. James released music as Aphex Twin, as if we’ve been clamoring in a drought of new music from him, but in reality he’s been quite active. Not only in the privacy of his studio, no doubt cranking out tunes at his leisure, but since the last Aphex Twin release (the 26 Mixes for Cash collection on Warp in 2003, or more properly before that, the double-album Drukqs in 2001), James released 10 records and a CD compilation as Analord, as well as a full-length album and EP as The Tuss (though for whatever reason he passed that project off as not his own initially).

It’s curious that someone so avoidant of attention has come on strongly with Syro, announcing its release with a series of incoherent press releases and blimp banners in the sky [perhaps it was the Warp Marketing Machine making the same tease and splash they accomplished with the Boards of Canada release last year]. Much like his videos in the 90s, James is a provocateur, all at once suggesting that he’s intensely private while at the same time plastering his face over everything possible, to the point that he has no identity anymore. Syro, on the other hand, boasts ridiculous artwork that is a laundry list of gear and itemized costs, completely unspeakable track names of syntax garbage, and no sign of his face at all. (Technically he does show slivers of his face on the expanded artwork, but even then he’s successfully obscured his own image.) So in a sense he’s come full circle, and the music of Syro points to that as well.

When asked by Rolling Stone how James feels about the new album he said:

So what of the music then? In the end, that is what it’s all about and how James arrived at this reputation in the first place. He’s been nothing if not unpredictable, from the clean Artificial Intelligence (1992) of his Polygon Window alias to the scathing drill & bass industrialism of Come to Daddy (1997), to the beatless pastoral sprawl of Selected Ambient Works II (1994) to the chunky, rough around the edges grooves of I Care Because You Do (1995). Syro feels like a bit of an amalgamation of many of those aspects of James’ repertoire, but the focus I’d say is largely on the clean and clear sound, melody and hooks, intricate programming and sequencing, and lush ideas. In this sense the closest comparison I can draw from his catalog would be the Analord series – for the uninitiated, do yourselves a favor and check out the CD collection, Chosen Lords (2006) of some of the finer moments from those 10 vinyl releases.

This is due to the clean, synthesized nature of most of these tracks, which are fairly dry mix-wise (meaning not much wetness in reverb) but incredibly tight. James proves again and again why he is lauded as such an innovator. A friend of mine expressed that he worried that this would sound dated after hearing some samples, and I agreed that perhaps in a sense it is “dated,” but one only need remind oneself that James cemented his reputation by essentially forging the way for so many soundalikes and devotees, and so he gets a pass doing some of what he’s best at, and doing it particularly well here after a reasonable hiatus. [ed. In a sense, the refurbished sound is somewhat comforting for the nostalgia of the 90s].

The most noteworthy thing about the first track, “minipops 67 [120.2]” (and that is one of the simpler track titles!), is its cleanness. That opening rhythm is charmingly pure Autechre circa 1997, but then that “Windowlicker”-esque bassline drops and it’s clearly Aphex Twin doing some of what he does best (and perhaps not often enough). He adds vocoder vocals and weird pitch-shifted vocalizing (as also heard on “Windowlicker”’s sort of “refrain” back in 1999) and some nice details in the drum programming that show off his skills as a producer subtly. The longest track is second, “XMAS_EVET10 [120][thanaton3 mix].” It has a rolling drum track that pairs well with his signature squiggling acid bassline (never sounding cliched, though, which is in itself noteworthy). As it progresses through its 10-minute duration, it reveals how detail-oriented and accomplished it really is, with touches of piano, tightly sequenced open fifth synths, and a restless bassline that is truly impressive when you pay close attention to it.

There are other tracks that fit neatly into the same category, touching on Analord clarity with a distinctly melodic sensibility: “4 bit 9d api+e+6 [126.26]” has a funky as hell bassline that works well with its zipping chords as an infectious dancefloor track, while “CIRCLONT6A [141.98][syrobonkus mix]” shifts focus slightly into more melancholy territory with wistful pads and what sounds like a filtered guitar that reminds me of New Order. One of my personal favorites is the leftfield, pitch-bend, weird techno of “180db_ [130],” with its almost tuneless chords and four-to-the-floor kick. Many tracks feature vocal samples, at times spoken and sung in what appears to be Russian – yet there is something barely intelligible about “the sound stretched in time” and a female vocal [of his wife Anastasia Rybin] singing something about “носочки”, which means “socks” in Russian. 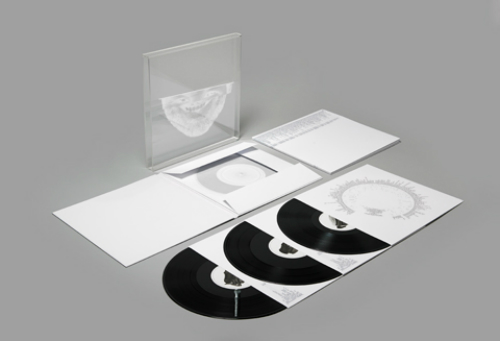 “syro u473t8+e [141.98][piezoluminscence mix]” (does this qualify as the title track?) shows all of this off with style, with no sharp edges to speak of but still with a nicely impressive arsenal of sequencing details and layers of sound. Then there are those skittering, hyper-technical tracks that focus more squarely on James’ talents as a programmer, rivaling his old roommate Squarepusher in that department, sometimes stealthily; whereas Tom Jenkinson’s Squarepusher material is meticulous, he also flaunts it as one of the main highlights of his repertoire, whereas James doesn’t seem to need to announce it — he just is quietly good at it. So “CIRCLONT14 [152.97][shrymoming mix]”’s fast clip and technical programming are instead a handsome contrast to the dreamy pads that float overhead and almost jazz-like improvisation in its sprawl (though I’ve no doubt every detail was deliberate rather than improvised).

“s950tx16was10 [163.97][earth portal mix]” is perhaps the most technically precise and spastic track here [confirmed to be a remix by Luke Vibert], a nice final showing before the denouement of “aisantsana [102],” a pretty piano epilogue that channels some of the fragility that provided such stark contrast on his previous outing, Drukqs. It’s quite effective as a comedown, reminding listeners that James is more than just an accomplished technician, but rather capable of extreme contrasts in both mood, tone, and idea. I’ve remarked to friends this week that Syro is one of the first releases in a long time that has been on almost constant rotation since I acquired it. In the day and age of downloads and an excess of options for new and good music, that in itself is impressive to me. And for that alone, my instinct is that Syro will be my album of the year, though time will tell…