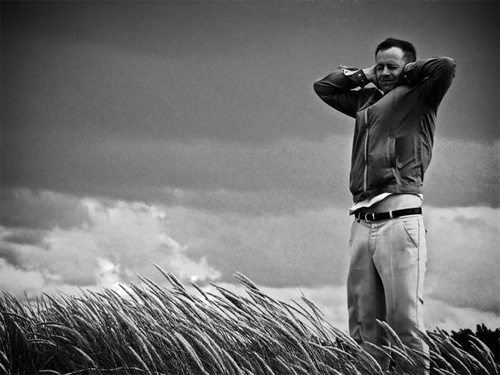 Hey Michał… we last spoke back in 2008 after your release of Treny. How have you been and what have you been up to?
Treny was an important album for me. It gathered a lot of good reviews and I started being so-called “recognizable artist” in alternative music circles. This changed a lot… I started travelling, playing lots of gigs, making soundtracks for theater, movies and commercials. It is also worth to say that in the meantime, another album was released called “Pentral” and was a collection of tracks based on sounds from Gothic sacral interiors.

Congratulations on Glimmer – it’s a stunner! What is the story behind your latest work?
My albums are a result of the constant need for self-expression. Nine tracks on Glimmer is just nine pictures of my present inner condition: my feelings, visions, thoughts. It is also an effect on my fascination of baroque chamber music: its melancholy, elegance, and beautiful fragile sound.

Talk about your decision to bring Małgosia Skotnicka and Andrzej Wojciechowski into the project?
It was a natural consequence of my sound ideas. Those musicians and their instruments perfectly fit within the backgrounds I had created out of baroque music samples. Implementing the harpsichord was obvious in this context. A bass clarinet was also great, as it has deep, intimate character. Live elements are very important in my music.

Tell us about your approach at balancing acoustic verses electronic sounds?
I reach the final sound through a long and patient mixing process. I am searching for the right balance between colours and structures. Satisfying proportions are not easy to achieve . I like when the acoustic-electronic difference is not too obvious.

I’m looking forward to your performance at Unsound festival in New York later this year! How is your live show different from a studio album?
Basically, we try to sound like the original music from the album, in terms of proportions and sound timber. However, very often the musicians improvise, playing slightly different patterns, playing other melodies, putting more expression into the performance. I just hope those who like the album will not be disappointed listening to us live…