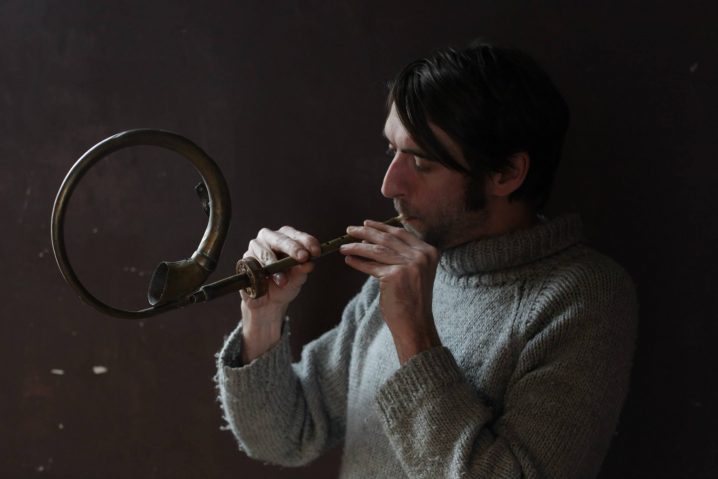 Lets start at the very beginning. Can you tell us how you got involved in composing, and what was your very first piece of gear?
I started playing acoustic guitar when I was about ten. I met a musical soul mate who was playing in the streets of the town where I lived. Since then we started playing together almost daily for years. We didn’t talk much, but just improvised with two acoustic guitars in strange tunings. We often looked for outdoor spaces with good acoustic qualities and interacted with the sounds that surrounded us. It was a very pure, communicative and learnful introduction to music. I’m self-taught music-wise so I still consider this an important part of my musical education. The same ‘naïve’ curiosity brought me to composing / arranging.

How many different studio iterations have you gone through, and what does your final setup look like right now?
I recorded my very first demos with my parents hi-fi installation and their headphones used as a microphone. When I was twelve I got a Tascam 4-track recorder. This was a total revelation for me : finally I could combine instruments and broaden the palette and make up an ‘imaginary band’. From then on I experimented more and more with self-made ‘instruments’ / ‘sound objects’ and prehistoric ‘samplers’ (I used a diy system with small ropes to loop short bits of vinyl). My fascination for the recording process grew and I bought some decent microphones. And over the years the computer replaced the 4-track and hardware sampler. But especially my collection of sound objects and instruments ran out of hand. They allow me to approach music in a very physical way. So it’s important to have all these sound sources around and microphones set up properly all ready so I can record impulsively. 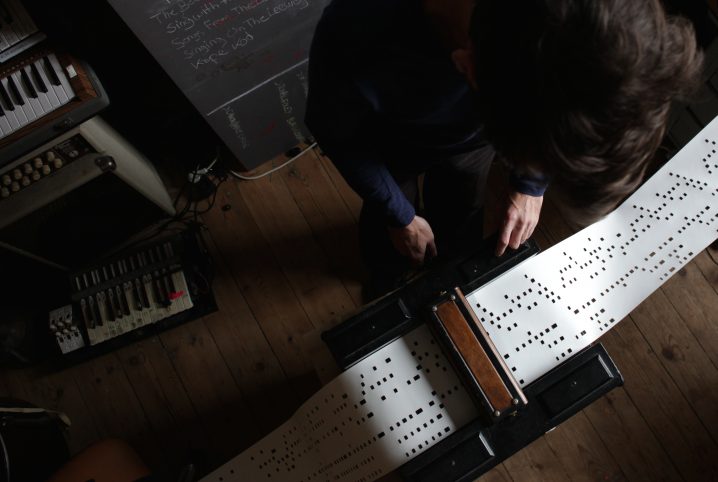 Tell us about your favorite piece of hardware.
I definitely prefer acoustic ‘hardware’. But because a sound has the most impact when you hear it for the very first time, my favorite sound always changes. For now I’m very fascinated by an old barrel organ I found secondhand. I like the odd sound and the old-skool, ‘hands-on’ approach of cutting music out of paper.

Is there a particular piece of gear that you’re just dying to get your hands on and do you think one day you’ll have it?
A similar barrel organ with more notes would be cool (the one I have now only has whole notes).

And what about the software that you use for production?
Well I prefer cutting notes out of paper then drawing them with a pencil on a laptop screen. The most interesting and rewarding things definitely happen before the computer. All these plug-ins make everything sound so digital too, so I try to postpone and limit the use of software. But it’s definitely a great tool for arranging. I started with Cubase, but turned more and more to Ableton because of its playful and real-time approach. For film and specific sound design work I return to Cubase or Protools sometimes. 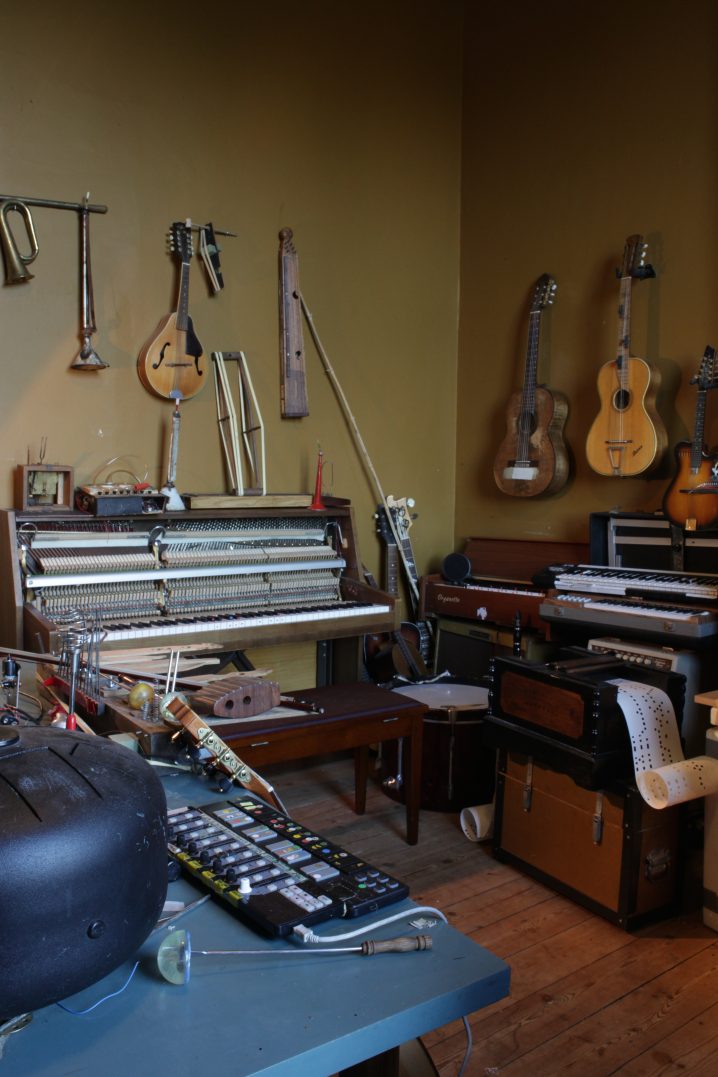 Can you please share some aspects of sound design in your work?
I’m fascinated by the confusion that arises when sound and music are combined. For that reason I like to integrate film-sound-techniques in music. To trigger the listener’s imagination I use a lot of foley : when the sound source is unrecognizable, the listening is somehow more intense. It’s also fascinating how (barely hearable) room tones or ambiences can give music space and depth. They are great to create an imaginary scenery for a musical story. Sound design for me is not a digital plugin affair, but a very analog, physical thing. I love to investigate the microphone as an instrument and explore acoustic phenomena (such as resonance, transduction, …) in the studio and in the outside world.

Any particular new techniques that you tried out for your new album?
There are some new colors in the upcoming Kaboom album that also required a different recording approach. I worked a lot with vocals – starting with vocals is a totally other way for me to start composing. I did some interesting recording sessions with a great guest singer and an old fisherman choir. I also recorded an octobass which was quiet a challenge, because it’s such as a low, deep sound. 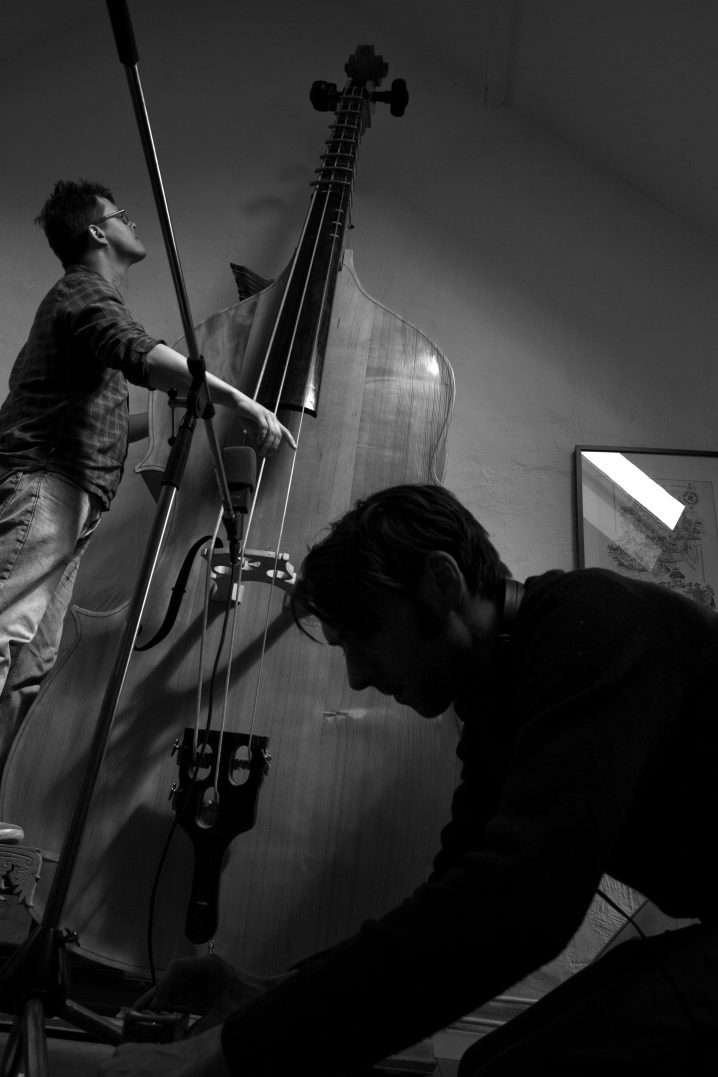 What does your live setup look like, and what do you bring with you when you travel for an extensive tour?
The big problem is that I’m not an octopus, so combining the instruments I play on an album is impossible. And it’s also hard to combine a fishermen’s choir with an octobass on stage, so live I have to take in account some practical limitations. So my set-up is more sparse and my approach more organic for live sets. I use my acoustic guitar (with a c-ducer contact microphone), a daxophone and wooden soundboard with foley objects (picked up by a handmade hypersensitive transducer). I also trigger samples with a SoftStep foot controller. I can loop, mix and manipulate these sources. For live sets nearby I have a bit bigger setup and often work with guest musicians.

What is the most important environmental aspect of your current workspace and what would be a particular element that you would improve on?
I like to work a lot, so I need a studio in the house where I live. My living room was my studio for many years. Now I have a separate studio room and it’s important for me that it’s a room with a view. I also like the sound of it – it’s an old house with high ceilings and a wooden floor. The most needed and urgent improvement is more space. 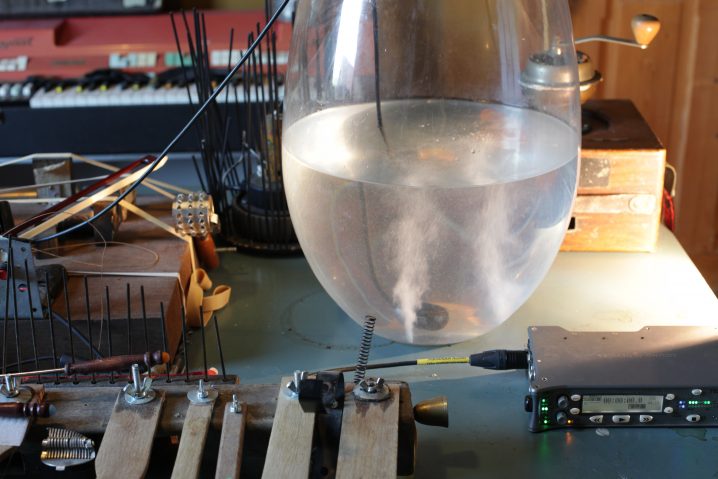 What can you tell us about your overall process of composition? How are the ideas born, where do they mature, and when do they finally see the light?
It depends, making an album is a very different process then scoring a specific theater/ film piece. The starting point is already different : in theater there’s already a whole universe created that inspires you and dictates the instrumentation and approach. For albums I need to make up my own universe and imagine how it sounds, looks, feels. I totally love that freedom, but it takes more time to experiment, to think, to read, look for artwork. When I’m making album it’s also important to have the artwork in the very beginning. (It’s going to look great for the next Kaboom Karavan album!) Once the universe gets more or less clear in my head, I assemble a palette of colors and instruments I’d like to explore. It’s good to have restrictions here and these first sounds organically tell you how to proceed. For theater I need to work pretty fast, mostly there’s about 6 weeks. This time limit is a good thing because it forces you to decide fast and act impulsively. But making a Kaboom Karavan album takes me about 3 years. I need more time in between then, to let ideas rest and have a necessary distance.

After the piece is complete, how do you audition the results? What are you reactions to hearing your music in a different context, setting, or a sound system ?
It’s important to listen outside of your studio, both for artistic and technical reasons. I listen in the car, in a theater or on any other system I come across, but especially bike rides (with temporary versions / mixes in the headphones) are important for me. It creates a state of mind that’s perfect for listening. But I don’t really wait until things are finished to do this. Mixing is not just a technical issue to fix at the end for me, it’s part of the entire creative process. So when a track is finished, I really did what I could and consider the mixing finished too. From that point on I just got too close to the material to judge. I’m really happy to have people like Nils Frahm and Erik Skodvin then who take care of the mastering. After that’s done, I usually only listen once or twice to check. 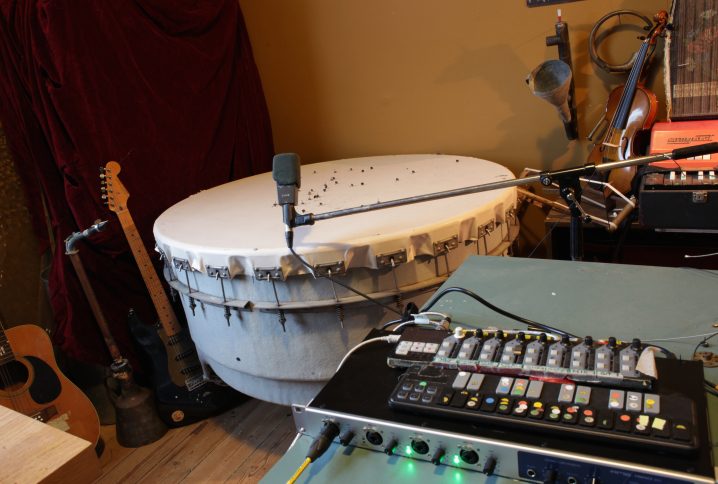 Do you ever procrastinate? If so, what do you usually find yourself doing during those times?
I think procrastination often has to do with doubt. And I have doubts sometimes off course, but I learnt to see this as something to cherish. It’s not an obstacle but a driving force for the creative process. And there’s so much to explore that procrastination would be waste of time. There are so many different aspects in a music making process, that it never gets boring too. So I make music pretty obsessively, I can’t imagine going on holiday without a mini-studio and some instruments.

What gets you inspired?
Lately especially books. Because they’re silent, you can only imagine the sound or music. The past two years I’ve been reading loads of travelogues from old sailormen and explorers. They didn’t know anything about where they were heading, how many years their journey would take… And every single thing on their way (the landscapes, the food, the sounds, the people, the animals, ….) was a first time experience. Therefore it’s such an intense and inspiring read. The upcoming Kaboom Karavan album will be very much inspired by these stories. 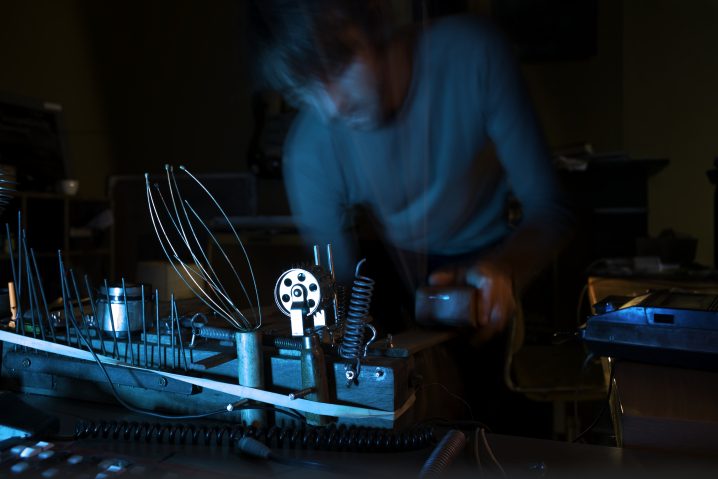