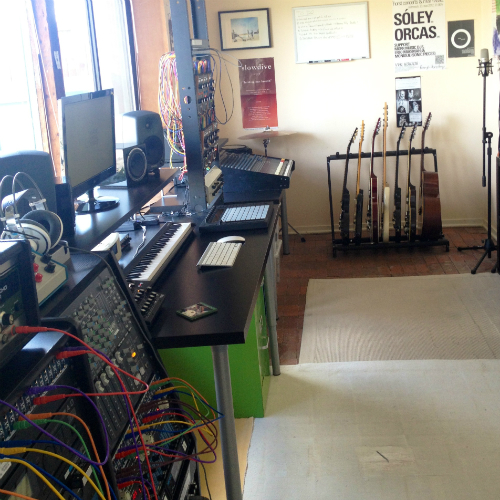 Editor’s note: I’m really excited to roll out this brand new column on Headphone Commute, dedicated to all of you, gear heads, DSP junkies and sonic geeks! In this special feature, each carefully selected artists will get an opportunity to talk about their current studio setup, working environment, favorite hardware, process of composition and much more! My very first guest of honor is Rafael Anton Irisarri, who I’m also crediting with inspiration behind this new feature! Enjoy! ~HC

Lets start at the very beginning. Can you tell us how you got involved in composing, and what was your very first piece of gear?
My very first piece of gear is how I got involved composing music in the first place. I bought a Boss DR-5 when I was a teen and a really crappy 4-track Tascam portastudio cassette recorder. The DR-5 was a drum machine that also included a sequencer and few sounds like piano, synths, etc. All very terrible, but it was all I could afford and a fun way to start composing my own music. Up to that point, I was playing in bands with others and well, didn’t have the freedom to create as I pleased. Having access to this technology was very liberating. I remember getting the DR-5, opening up the package and going thru that manual front-to-back and not going to sleep until I knew exactly EVERY single function on the machine. One of my fondest music nerdon moments.

How many different studio iterations have you gone through, and what does your final setup look like right now?
At least ten different ones – it’s all evolved so much over the years. From very complex setups – at one point once had a huge 32 channel mixboard and several synths – to very simple ones, like when I made “Glider” for Ghostly, it was a bedroom studio setup with just a few FX pedals and a small Mackie mixer. My current setup is a highly-functional one and thus far the one I’m the most satisfied. It’s been now years of acquiring knowledge and gear and learning how to obtain the best pieces for what I need in my mastering studio setup or for my own composer studio at the best price. 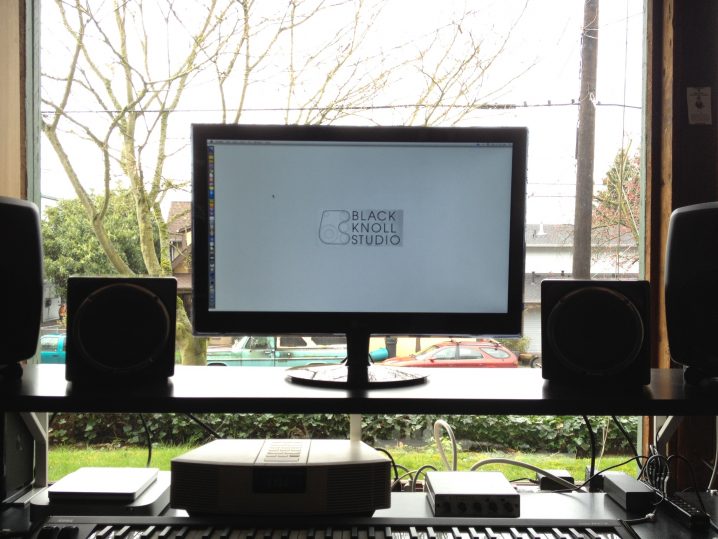 Tell us about your favorite piece of hardware.
It’s always changing. So many things I love. I’m obsessed with all my Moog pedals at this moment. Just finished patching everything to a 48 point patchbay and it’s been really fun to use them in a modular way. I’m also in love with this little box made by a small company out of Baltimore called KNAS. It’s called a “moisturizer” and it’s essentially a spring reverb with an LFO, Filter and CV added to it. So much fun! For more “serious” production gear, I never mix these days without my FATSO. Love the saturation and compressor for different applications. Lastly, the best piece of gear I’ve ever bought is my SSL summing mixer. I can’t really put to words all it does for my sound, but it’s a huge part of it.

And what about the software that you use for production?
I’m using Ableton Live almost exclusively, aside from third-party Universal Audio plug-ins. They are incredible at emulating high-end pieces of classic gear, though very expensive. I’ve probably spent more money on UAD plug-ins than I’ve spent on buying vinyl these past 10 years, it’s pretty mental!

Is there a particular piece of gear that you’re just dying to get your hands on and do you think one day you’ll have it?
Oh, there’s a huge list, not just one! I’ve got a severe case of GAS (Gear Acquisition Syndrome). I even got a 42U rackmount sitting here waiting to be filled with new friends – anything from the Roland MKS-80 (rack version of a Jupiter 8 synth) to some serious mastering gear, like a Manley SLAM Mastering Limiter – price tag on that guy is over $7K, which is going to take several years saving and counting the pennies I make selling records I reckon! 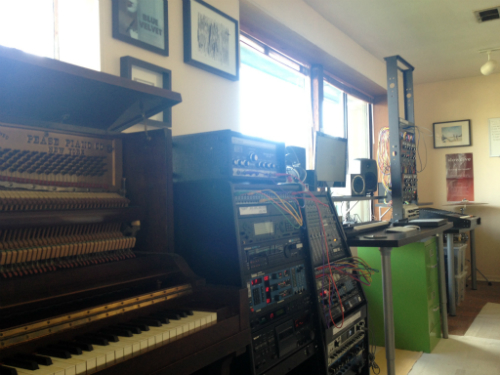 What does your live setup look like, and what do you bring with you when you travel for an extensive tour?
My last touring live setups were a bit nuts, so I’ve started to scale back a bit again. During my last Europe tour in January this year, I messed up a lot of my Moog pedals, so Ive decided to start taking less expensive gear – things get trashed really bad when you are traveling overseas. Up to that point, I was carrying with me over 15 FX pedals, two synths, 65 cables, 8 midi controllers, and backlining a guitar, bow, amp and 24 channel mixboard. I used EVERY single piece of gear live. But yeah, I’ve started to scale back, so for example, I recently did a The Sight Below show here in Seattle and only took two synths, 6 FX pedals and 3 midi controllers with me. Funny thing is I still ended up using about 35 cables. My wife was helping me setup for the soundcheck that evening. It’s the first time she’s actually done this with me. We kept patching cables until we both ran out, and she said “so THAT’s why you are always buying so many cables!”

What is the most important environmental aspect of your current workspace and what would be a particular element that you would improve on?
Organization for me is the most important thing. I’m quite compulsive, everything HAS to be in a specific place, perfectly lined-up, patched and ready to be used. Otherwise, it doesn’t get used so often. I don’t have anything tucked away – if it’s in a closet, it won’t get used. Out of sight, out of mind. I’m also quite the germophobe, as you may know, so my studio is my clean sanctuary. I require people to wash their hands and sanitize before coming in and touching anything – even close friends think I’m totally nuts when it comes to that stuff. I have a whiteboard in my studio – it contains a detailed “to-do list” for each week – something I learned from Robin Rimbaud actually. Order and neatness is crucial to me. I cannot focus otherwise.

Improvements: this area never ends, it’ll never be perfect, so it’s more about learning to accept that fact and working with what you’ve got. Making limitations part of the creative process. Afterall, limitations are truly the mother of inventions. I strongly believe that’s the case. 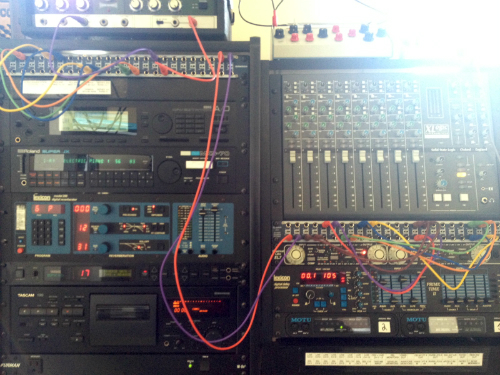 What can you tell us about your overall process of composition? How are the ideas born, where do they mature, and when do they finally see the light?
Composing is a very intimate process for me. I need to be isolated, withdrawn to get into it. That’s one of the toughest things of living in a cool city like Seattle: there is ALWAYS something great going on. So you have to really take a step back and recluse yourself. Some ideas come out of a sound, others out of a piece of gear, there’s really no exact science or rules. For example, one of the songs on the new ORCAS album was born out of me showing Tom a new polyphonic analog synth I received. It literally arrived just a few minutes before he got to my studio and I was opening the box when he got in. So, out of the box I plugged it in and was showing him what it does and how you can send MIDI to it via USB to play a sequence off Ableton. As I was doing that, I stumble across a great little bass sound and had a very cool nice line happening, so I patched it into my rig, ran it thru a few FX’s and recorded about seven or eight minutes of me improvising with it. Just like that: boom! new idea. I asked Tom to play guitar on top of my improv, also manipulating his sound as he played along to the track, recording everything. And before we knew it, we were adding vocals, lyrics, and structuring this sonic experiment, morphing it into an actual song. All within a few hours of me opening a box. It just happens like that sometimes.

After the piece is complete, how do you audition the results? What are you reactions to hearing your music in a different context, setting, or a sound system?
I love listening in different systems: my old trusty Genelec’s, my home stereo JBL’s, a shitty BOSE boombox, three different pairs of headphones (from high-end AKG 701’s to Sennheiser classic HD280 & HD-25). I also listen on my wife’s car sometimes. Mostly, when I’m listening I’m trying to get a similar-sounding mix across that multitude of systems. It obviously varies depending on the music, but overall, is a good thing to listen and compare on different systems and circumstances. Elements that for example are very present on headphones may not be so much in the living room, and even less on a car stereo. My goal is to find a good balance, even before I get to the mastering stage. Just the same way you cannot really fix a bad sound at the mix stage, mastering cannot fix a bad mix. 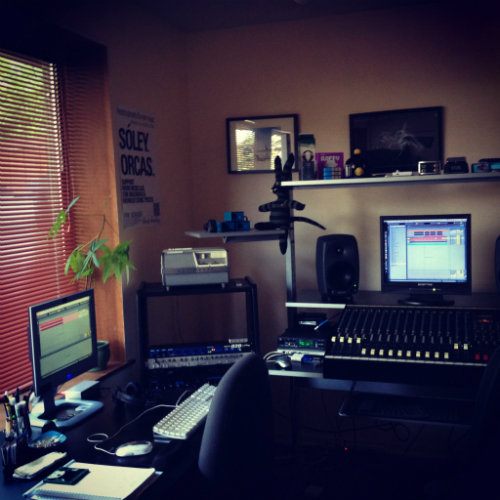 Do you ever procrastinate? If so, what do you usually find yourself doing during those times?
I do, unfortunately. I try hard not to! Sometimes I get very overwhelmed and depressed and cannot function well. I find those times terrible for creativity – there’s good depression and bad depression. Good depression results in things like “Daydreaming” or “Glider.” Bad depression is just unproductive. Been an independent artist is such a struggle. A lot of energy is spent preoccupied with things like “where am I getting income next month?” – it’s a very unstable thing and trying to be creative when your mind is overtaxed with worries is tough. So, you really need some distractions. A lot of artists turn to drugs and alcohol. Unfortunately for me, drugs don’t really make me feel any better – we even have legalized marijuana here in Seattle – I can walk to the store and buy some premium quality organic weed that would make my 15 year old self very happy, but you know, when you reach a certain point, you just don’t do it. I dunno why, but I’ve just never been too inclined towards any of that lifestyle and indulge in any of those things.

And of course, when you make music for a living, music is not really a good distraction anymore. Instead, you get sidetracked by things like the internet, social media, etc. Over the years, I’ve tried to spend less time online, rather spending it doing something else, like watching a film or reading a book. There are of course, many guilty pleasures along the way – I’ve been very obsessed with George R.R. Martin’s “A Song of Ice and Fire” universe – from the books to HBO’s Game of Thrones. I even made a version of the ‘Rains of Castamere” last year, which I posted to my soundcloud page. It’s really silly and embarrassing, but I even got all giddy like a schoolgirl when “King Joefrey” re-twitted it after I posted it. Now THAT was a good high!