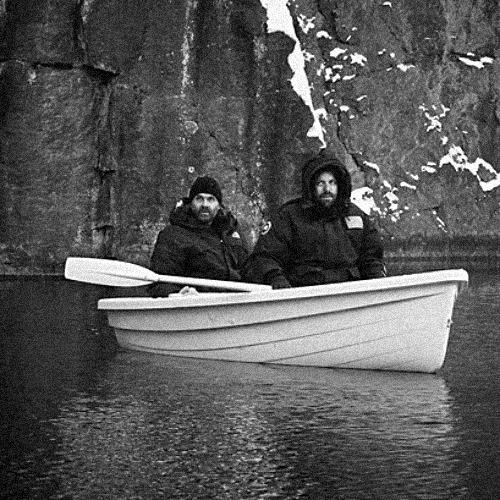 Hi guys. I’ve followed your work for a while, but haven’t had the chance to cover your sound on Headphone Commute, so I hope we can start at the beginning. Where do you guys come from, what does the project name mean and how would you describe your sound?
We are located in Franconia, Bavaria, South Germany. A Laid back province town called Nuermberg. The first half of the name Boozoo Bajou comes from Boozoo Chavis a Zydeco artist from Lake Charles, Louisiana. I met him in the early 90s in a swamp Dancehall. Bajou is the wrong written version of bayous are extremely slow-moving streams or rivers in Louisiana.

Your latest studio album has a rather simple name – ‘4’ – what was the inspiration behind the concept and its title?
It’s our fourth Album actually. For the track-names on the album, we used some nice sounding Island names from the north Atlantic, so we wanted the album title on the other side straight and simple. Also the reversed 4 from the concept artwork looked very good, that was also a good “symbol”.

The sound on 4 is even more organic, acoustic and dare I say ‘jazzy’ at times. The recording of all instruments is also superb! What was a particular aesthetic that you attempted to achieve?
We got a different view on that. All albums we did before were much more acoustically and let’s say non abstract. In fact, 4 is much more synthetic, but we wanted to achieve, that all modular synth sounds, external effects and edited instruments sound pretty much organic, although we worked with much more abstract elements than before – at the end it’s our ambition, that it doesn’t sound cold and soulless… nice you feel similar.

What were some of the musical influences that seeped into this record?
The influences change from time period to personal alteration, now we would say it’s all more inspired by our personal current state and necessity of expression. Krautrock, Jazz and also E-Music are seeping through… Also some very private experiences, in the past years, had big influences on 4.

How, would you say, your sound has evolved over the last sixteen years?
Different aspects. First we changed rooms/studios for each record in the past. the acoustic shift, the different character of each space, absorbs quite a bit of musical direction. It’s the sound proportion which pretends us to an atmospheric condition – that’s very important for us, not to replicate ourselves from project to project. For example, our latest studio is stuffed with pictures from well known artists – many from my parents’ friends, very inspiring!! Also the technique and the instrumentation leads us to new directions.

There are more than a few interesting musician appearances on the album – how did these come about?
It is like on all other records – a long progression. We work on our tracks sometimes over years to develop, with the times and change within, we come to the conclusion what instruments we want and who could play that. Of course, the personal contact to these musicians is very important and also their personal interest in working together with us. Max Loderbauer a modular wizard we knew way back from the Sun Electric days in the early 90s brought some great parts to the layouts we did. It just matched perfectly, made sense and inspired a lot for the end-production too. Markus Stockhausen (Flugelhorn) and Stefan Pötzsch (Violin/Viola and Mbirra) play together since many years, and when we heard them playing together, it was always a big inspiration… So we asked both independently, if they would play on some pieces. Stefan is from my home town too. They work both in the contemporary, avant-garde and jazz music scenes, which we find also very interesting. Frank Zeidler is our man for the guitar parts on several tracks. We know each other for a long time – we are good friends and we all worked together also in a “Kraut-Project”. Frank Freitag who played Duduk on Hirta is a very special and personal friend too.

I hear a lot of fascinating percussive sounds and even field recordings on the record. If it’s not a secret, what is the source of some of these?
Most of he percussion or percussive sounds where played live, the rest is programmed and lots of work being combined to reach an entire rhythmic apparatus. The field recordings or atmospherics are collected and well sorted by us mostly over the years or in impulse. The source is our personal library…

What prompted your transition from Studio !K7 to R&S/Apollo?
After eight years with !K7, it was time for us to open a new chapter. We where looking for a new adventures sound-wise, so we moved our studio and changed the environment. It was a good decision, when we heard the result of our new record.

What are your reactions to music genrefication, and particularly the association of your works with ‘chillout’ [a term, I’m not so happy about myself, to be honest]?
The term ‘chill out’ is superficial and meaningless if you don’t do determinations, but we never felt based in that scene. We like laid back music, but we distance ourselves from that irrelevance if there is no perception, concept and sincerity implied, it’s becoming “easy listening”

What are you listening to, drinking, and reading right now?
Old Krautrock, Dub, Psych records… We love French vin naturel and our local breweries. Florian reads two books. One is by William Mcilvanney called Laidlaw, a Scottish crime story, and a brilliant book about pop history is Yeah Yeah Yeah by Bob Stanley from Saint Etienne, and Peter reads a documentary named “Die Gruppe 47” about the commune of the most important German authors poets like Ingeborg Bachmann, Paul Celan, H.M.Enzensberger, G. Grass etc. founded in 1947.