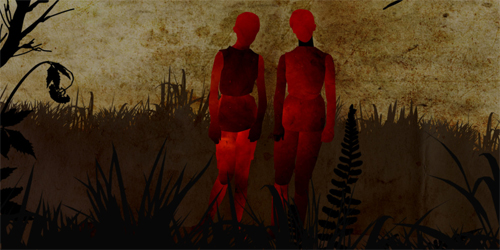 Your band has a pretty neat name. How did you come up with it and what does it mean?
The Hole Punch Generation name reflects mass-production processes and how these processes have affected art, culture, and identity.

The Hole Punch Generation has been playing together for five years now. How did you guys meet? What have you been working on all this time? And why do you think it took about five years to release your first album?
Patrick walked by Adam Sturtevant playing a show in Boston where he was covering Squarepusher songs on an acoustic drum set. He approached him after the show, asked him to collaborate. The Hole Punch Generation always wanted to work with a drummer who was influenced by computer-based music. Patrick and Caleb met making video games together. Five years is a long time. We wanted to come out strong as a band, with our sound fleshed out entirely. A lot of iteration took place: writing and throwing out songs that weren’t good enough, producing a song and then scrapping all of it to re-produce it. Each iteration got us a bit closer to the sound we wanted.

Tell us about working on your music video, “They’re On To Me”.
We met Avi through a music collective called Oxytocin. Avi plays guitar for a chiptune band, Cathode Rays, but is also an amazing visual artist. He had done a really impressive video for the band Spirit Kid, and we reached out to him about working together. He seemed to immediately understand the aesthetic of the band and even his earliest comps immediately reflected the lyrical content of the song. We think of him as a friend and a great collaborator.

How did you connect with David Newman and get signed on Audiobulb Records?
We’ve been fans of Audiobulb for quite some time. Love Austici, He Can Jog, Milinal, Build, Calika, Ultre: all these artists inspire. We worked on the album for years. When we were done, Patrick sent 5 songs to Audiobulb, with a note disclaiming that we understood our sound was different from the rest of the catalog. David listened to them over and over, and offered us a release the same day he listened to it.

I have to pry on this one – how do you think your album fits with the rest of Audiobulb’s catalog?
Our album marks something a little different for Audiobulb. But I think to say “every Audiobulb release prior to THPG is the same as the next” would be incorrect. David works with musicians who come from very different cultural backgrounds and aesthetic perspectives. Without putting words in his mouth, what ties the Audiobulb catalog together is the importance of innovating. We definitely share that ethos as a cornerstone of the band’s process and identity.

Your site reveals and shares some of your original Max/MSP patches. How do you go about designing these sounds? What role does Digital Signal Processing have in your music? And how do you balance the medium between acoustic and electronic?
Custom DSP is truly integral to our sound. When designing patches, inspiration comes in myriad forms. It could be a “wouldn’t it be cool if?” kind of moment, where we create the software we don’t have access to. It could be an improvement or tweak to something more widely available that isn’t quite doing what we’d like, or it could just be a happy accident! Caleb works mainly in Max/MSP/Jitter. Patrick works in Reaktor and Supercollider. Every song on our Audiobulb release employs the use of custom DSP.

What other software and hardware can we find in your studio?
To give you an idea of some of the things in our toolset: Max/MSP, Reaktor, Absynth, Ableton Live, Nuendo, Moog synths, acoustic guitar, twelve-string acoustic guitar, electric guitar, circuit bent objects, fuzz pedals, contact mics, electric bass, drums, toy pianos, a couple Monomes, a bunch of Monome patches.

Is there a main theme to your songs? What is the message that the listeners should receive from your album? How central are the vocals to the structure of each track?
Vocals are the foundation of our songs. They dictate the phrasing and the forms. Our lyrics are usually written and then distilled down to their essence: We prefer to repeat a message rather than expound on it. Listeners tend to take away from our songs what they conceptually bring to them.

How different is your live performance from the studio album?
The main difference is new material gets tried out live. Always.