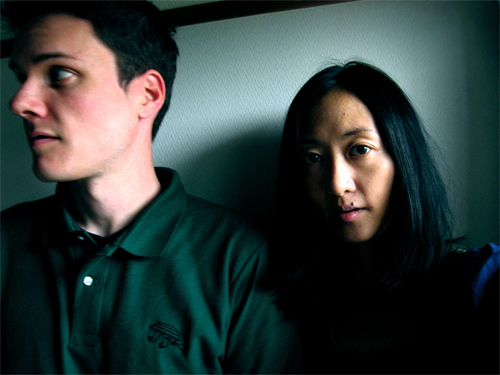 [editor’s note: answers provided by Will Long and Rie Mitsutake as noted]

Hi Will, how are you? So where are you at the moment? Japan? How did you end up there?
Will: I’m doing fine. Right now I’m on a train to Niigata in Western Japan for a show, my next-to-last show with Christoph Heemann and Jim O’Rourke. I came to Japan in 2010 for a tour with Yui Onodera to promote and play shows for our album “Generic City”. I liked Japan so much, and since I was looking for a place to relocate to at the moment, I moved here on New Year’s Day 2011.

How did you and Rie meet, and more importantly decide to work together?
Will: Rie and I had been in contact over email before, because we have released on the PLOP and Spekk labels (owned by the same company), and we had contacted each other to trade music, and maybe make a collaboration together. When I came to Japan, we met in person for the first time. After I moved here, Rie and I started working on our music together.

Hi Rie, is this your first collaboration? What was it like working with Will on the music?
Rie: I’ve collaborated with some other artists before, but this was my first time to make a whole album with other artist. It was really fun to make music with Will. Our music style is very different, but we have lots of things in common, like we both love nature, enjoy simple life and appreciate small things in everyday life. We also have a similar sense of humor. We are both have open-minded, and have a flexible attitude toward making music. Our collaboration was really natural. Most of the time we were very relaxed, having fun and laughing lots. I think all those elements were expressed in the sound of this album.

How different would you say is this album from your solo works as Miko?
Rie: I think my approach to this album was very different from Miko’s album. In Miko’s music, I’m focusing more on composing and arranging. The arrangement is more detailed, and the sound is busy and colorful, putting lots of sounds, melodies and rhythms all together. But in Oh, Yoko’s music, I was trying to be more relaxed, release myself to be open and fit in with Will’s music. I was more focusing on playing instruments and singing, trying to see what I can add to the sound Will makes, rather than trying to do something complicated. Will was a great producer too and had many great ideas about the direction of each song and how I should sing. I think it worked out very well. I also think that using vintage synthesizers helped a lot to blend our music together. We were just playing around instruments and waiting to see what comes out. We were influenced a lot by the characteristic sounds of vintage instruments, the special effect of richness of sound, lingering echoes and reverberations. They definitely directed the flow of sound. It was my first time to make music this way and it was a really exiting and inspiring process.

Will, would you say that this was a slight departure for you and your sound as Celer?
Will: Oh, Yoko is definitely a departure from Celer, but I really tried to use many of the same production and mixing styles that I do for Celer, but just in a more pop-song centered style. Instead of using processing and effects to blend sounds together, I was instead mixing many acoustic and hardware electronics together in a more collage-based, tapestry-like way, similar to the way I do with Celer music. It was just with light treatment, and instead focusing more on the pure sounds from the instruments and voice, as opposed to the images and memories that the effects blend the music into.

And you’ll still work on Celer music, right? What do you have coming up in the pipeline?
Will: I do still have Celer releases coming out at the moment, and there are some planned for the next few months into next year as well. I haven’t been actively creating new material except for this current tour with Christoph Heemann and Jim O’Rourke (because I never play the same material at solo shows twice), but maybe sometime soon I will make new music. Right now I’m just trying to focus on the releases I’ve already finished and support them as they are released by the labels. Just a few days ago there was a release on CD of my album “Radish”, on the Japanese label Commune Disc. This has been in the works for a long time, but I’m glad that it is finally released, because I respect the label a lot and love the music they release. Unfortunately they don’t really distribute at all outside of Japan, so it is really more of a Japan-only album. Other things coming up is a film score I made a few years ago called “Voyeur” that will be released on LP from the German label Humming Conch, and an album on CD called “Climbing Formation” on the French label Entropy Records. There are still some releases planned for the Japanese label Spekk that have been in the works for almost four years, and next year will also see the release of an album on the French label Baskaru. Some of those things may change, but for the moment, that is where things are.

Every time I google “Oh, Yoko” I get a bunch of results with John Lennon and Yoko Ono. So where does the name of this project come from?
Will: I think both of us have different reasons for why we chose this name. When Rie and I started our collaboration, I had a job archiving old Beatles interviews and fan videos, and had the idea of mixing the audio with music. For the name, Yoko seemed like a cute name, something that could be related to Yoko Ono, but not necessarily directly related. I was born on the day John Lennon was shot, so that was also the inspiration for the sample in our song “Newsbreak” on the album.

Tell us about Normal Cookie. How was this label born, where does its name come from, and what would you say is its musical aesthetic?
Rie: The name came from a silly conversation we had when we were touring in Australia in 2011. I bought a bag of cookies for my night snack from a local supermarket. When I was eating it at the hotel Will asked me “What does it taste like?” and I answered “It’s a normal cookie”. I didn’t know why but Will was laughing because it was weird English. Anyway, we liked the phrase and decided to keep it for something for future, and we used it when we stared our label. Normal Cookie was born basically as our private label only for releasing Oh, Yoko’s music. When we finished our first single “Seashore”, we were not sure which label to send demo to. Also, we didn’t want to wait too long for labels to release it. Especially Will has had many problems with waiting for his releases. We thought we could do it by ourselves and just tried it out. It worked out pretty well with the “Seashore” single, so we decided to do it for our album too. I’m not sure about its musical aesthetic yet to be honest.. but we want to release more music other than Oh,Yoko in the future too. We also want to make the label more related to art. We want to release materials like movies, photo books, children books.. we have lots of plans.

What should we expect in the future from you, the label, and Oh, Yoko?
Rie: For my solo project Miko, the progress is very slow, but I am still working on the 3rd album. I am also working on another solo project called Soft Candy, a synthesizer only project, for which hopefully I can finish a mini album soon. For Oh, Yoko, since we’ve just released our first album, we are still working of promotion, doing other interviews and contacting etc,. We hope more people find us and listen to our music. We want to tour in Japan and other countries too.

Read Headphone Commute review of I Love You