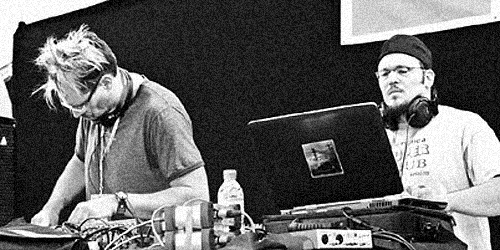 Liumin is a lot warmer than your previous release, The Coldest Season. To what do you attribute that change, and how has your sound evolved between the albums?
[SH] This is a great observation and one we attribute to our travels. The Coldest Season was recorded primarily in the winter months so the mood of the music reflected the environment in which they were recorded. This album is a reflection of the many shows we’ve played and the sound we brought before an audience, it’s sort of a sonic travelogue. We eventually sat down and went through what we felt was our best material from our live shows and started building an album from that point but of course altering and expanding on the live material.

Can you shed a little light on your collaborative process?
[SH] The creative process for Rod and I is always different, from the time “The Coldest Season” was recorded to “Liumin” the dynamic in which we worked has been modified a bit. I also contribute a lot of this to moving quite a few times over the past 3 years, I’ve had to re-assemble my studio each time we’ve moved and I never remember how things were hooked up before, I just rip it all apart and put it together again but it always ends up different in the end. Our studio’s have both changed a bit over the past 3 years and now we work a bit more efficiently with the help of some editing tools and software advancements. On this album I worked on specific elements, mainly the synths, atmosphere and bass loops and then sent the work I had to Rod and let him assemble and make sense of it all. Of course we had some key rhythmic starting points from material we culled from the live shows but in the end Rod mended all the sonic tape. We still use a good portion of analog equipment in this album but with the help of the computer we were able to take these elements in different directions. Rod also used a variety of microphones and field recording equipment (including a few custom made underwater hydrophones) to try and capture and push the threshold of natural organic sounds around us and submerged beneath us.

What does the name, Liumin, mean?
[SH] “Liumin” has a few different meanings as I understand it but the title was sort of chosen for us on one of Rod’s trips over to Japan. There was a small shop in a seedier side of Shinjuku called “Liumin” it flickered in neon lights and resonated with Rod in that very moment. Something about the city and the moment, after he had spent weeks conducting field recordings around Japan it was on this last night there the concept was complete, he brought it up when he came back and the title grabbed us both. Sometimes the universe just pulls you into an alternate dimension and when you leave this vortex the vision becomes clear.

Tell us a bit about Rod’s trip to Japan…
[SH] He discovered alien life forms do exist and have a clear presence in many of the field recordings conducted there.

What brought on the decision of incorporating field recordings into Liumin?
[SH] We’ve always used field recordings in our work, Rod’s more interested in field recordings than he is music, if you reference his early ambient productions in the early 90’s you’ll hear field recordings present throughout. One of my personal favorite ambient albums is a piece he did with Michael Mantra called “Sonic Continuum” in which field recordings become musical, they hold more sonic depth than the atmosphere around them, something Rod is truly gifted with. The Coldest Season was also initially built on field recordings, atmosphere and nothing else, the static sounds from the album were not machine produced or mechanical this was the sound of my beta recorder and a Shure microphone on a tripod capturing one of the worst blizzards we had seen in over 10 years all recorded from under a dock off of Lake Michigan, I was completely numb by the time the tape stopped, a few minutes away from frost bite. I went inside my home the next day and began to listen closely at what was captured, it’s quite amazing how the sounds around us (nature produced) can harvest or trigger emotional content. This recording was vital to the production of that album as much as Rod’s field recordings captured in Japan are to Liumin, there is something so special in the natural environments surrounding us, all you have to do is shut your eyes and listen.

The second disc of the album is a special treat!!! Tell us a bit about that accompaniment.
[RM] The second CD in Liumin is a collection of atmospheric energy. When I wander around, looking for things to record… I pay close attention to way I feel more than what I actually hear. I believe wholeheartedly, that emotional energy, or the “chi” of a specific location can be captured through phonography… a sonic photograph of para-physical energy… energy of lifeforms that you can’t see. I can come home and play back a recording that I made of an area that had little-to-no sound, and with closed eyes… feel an avalanche of emotional charges and smells from the place. I think with a high quality digital recorder, recording WAVs at 24 bit 196khz, you pick up allot more than sounds. The portable recorder becomes a recorder of intangible energy. If you think about it from a physics point of view…. everything is vibration. Hyper-sensitive recording equipment captures this perfectly. Many of these vibrational energies are encapsulated on that second disc. 80% of the field recordings on disc 2 were made in strange places around Tokyo… definitely off the beaten-path. Locations where weird things were happening, or have happened in the past. There is actually some baffling sonic phenomena on that disc that I can’t explain. I think Tokyo is a highly charged area when it comes to metaphysical energy. To be honest… I haven’t listened to much music in the past several months around my home. Just constantly playing quiet environmental backdrops 24/7. Nature is the best composer. The ultimate LFO. Constantly morphing, and never sounding the same twice. Ever. We’ve just become too desensitized to it…. trying to ignore it all our lives. To genuinely appreciate it, we have to re-educate ourselves, and try to re-learn what we’ve lost. We need to work at becoming sensitive enough to perceive the beauty in recordings of moving air and vibrational energy. Synesthesia is a neurologically-based condition in which stimulation of one sensory pathway (sound) leads to automatic, involuntary experiences in a second sensory pathway (smell etc, etc, etc). I think many more people out there are synesthetes (one capable of synesthesia), but we’ve worked hard over our lifetime to switch off this function. We need to re-start this module of our brains again. A CD like the second disc of Liumin can blow a synesthetes’ mind right out of his/her head… in a good way.

– What’s next in store for echospace [detroit]?
[SH] We have a new single coming out from cv313 with all new remixes of “Subtraktive” a song which originally appeared on London’s superb Smallfish label. It features the first recorded remixes from King Midas Sound & The Sight Below which are both so powerful in their own right, we’re very honored to have them involved with such a special project. We also have a mix we culled from our live show in Moscow as Deepchord Presents Echospace on the B side. After that there will be a few more cv313 singles and a double CD album to follow in the fall which will be the first studio album from cv313. The second disk will feature new remixes of some of the material from Area, Luke Hess & Brian Kage’s Reference project and Rod Modell has a few solo remixes as well. The project closes with a 20 minute epic from Brock Van Wey, we’re very excited about it as a whole, it’s very diverse.

There are also a few new albums planned for the Echospace [AIR] project from my good friend Area with his debut album and he really outdid any expectation I had, it’s quite exceptional and a new beautiful album from Brock Van Wey. There are some other things planned but we’re still working out the fine details.