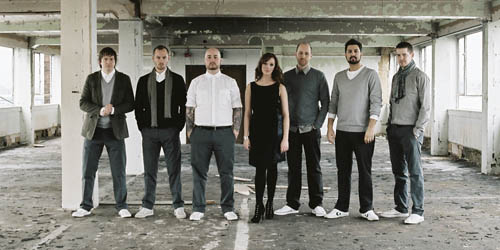 Tell us about Submotion Orchestra. Where does the name come from? How did you guys all meet?
We originally met in Leeds. We all knew each other from various projects, gigs and sessions, since Leeds has a very vibrant music scene going on, but we’d never all played together. Tommy and Ruckspin originally brought the band together after wanting to play some dubstep-influenced material in a live setting, making use of the players’ jazz backgrounds as well. We all came in one by one until the size and atmosphere of the players felt right. The name came at the end of one of the usual band-naming sessions that last for ever and throw up a lot of very bad names. Luckily most of these have been forgotten. By experience, as soon as someone says a name that doesn’t sound absolutely terrible, it’ll work…

In a seven piece band, describe the process of composition. Is each artist responsible for his own instrument? What about the lyrics of each song?
The composition varies. Tommy originally brought a lot of the initial material to the table, while we revisited some of the tunes Ruckspin had originally done on Ranking Records to adapt them to the Submotion sound. Once things were in place, the other members of the band started to bring material in too. Generally, once the main parts or hooks of the tunes had been written, they were brought to the band, where everyone comes in on the arranging and individual parts. Most of the tunes ended up in a pretty different place to how they originally sounded, though a couple stayed quite close. It’s always a bit tricky with so many people to get everyone’s opinions and thoughts covered, but generally we all know what sound we’re aiming towards, and it usually ends up getting there pretty naturally and without much controversy. Tommy however is the main lyricist.

There are definitely dubstep elements in your music, (which I’m sure come from Ruckspin). What about the jazzy components? Who are the influences behind these organic and etherial sounds?
We’re all equally responsible for the mix of influences. Fatty’s been involved in grime and hip-hop projects, which inform the bass-end of the music pretty heavily, while Tommy, Taz and Bobby all have their backgrounds in jazz-based music, as does Ruby, and we’ve all drawn upon that. But if you listen closely, each instrument has its own feel – Danny’s percussion has a bit of Brazil in there, Taz’s keyboards show his early synth and ambient influences, and Tommy’s approach to the drums is very jazz-based. We’re trying to get a jazz sensibility into a music that doesn’t always have it, but works with it very nicely. And the ethereal nature of the sounds has a lot to do with Dom’s sound designing.

Talk about your live gigs… How are they different form studio recordings? Do you discover new interactions that make their way back into your studio?
Because of the jazz background of most of us, we’re not the sort of band who are happy to play the same tunes the same way every night. Quite a few of the tunes have developed differently through playing live, and there’s sections to some songs that you won’t find on the album. Solos will often also be quite different. The instrumental tunes are also a lot heavier and more active live, and now as we’re developing material for the second album, we’re wanting to do it as live as possible to keep that feel there.

What are you working on right now, and what’s next for your band?
We’re currently getting material together for the second album, and fitting in rehearsals for it whenever we can manage, since the summer’s pretty busy with festivals and gigs. There’ll be some stuff that will keep fans of the first album happy, but hopefully also a few things that will move the sound on a bit and surprise people. For the rest of the year, we’ve got a summer full of festivals – Big Chill, WOMAD, GreenMan, Soundwave and Outlook in Croatia – and then in October/November a UK and Europe tour. So not much downtime, but it’s good to keep the momentum going.