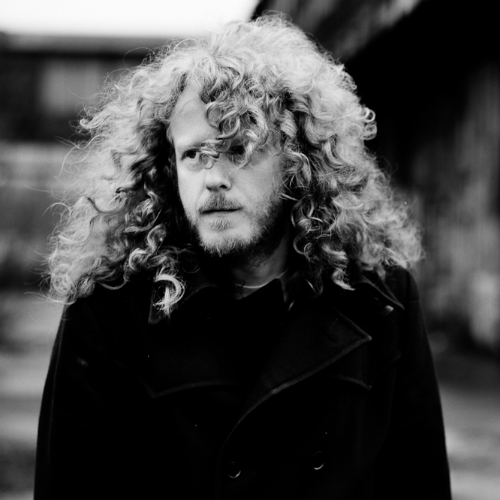 I have to say, I’m incredibly excited that you resurrected The Stranger project. What prompted you to move in that direction?
It felt like it was a great time to explore where I could take The Stranger work in a new direction. I moved to Krakow from Berlin and immediately started working on some darker pieces which became the catalyst for what became the final release. At the same time I was also still working on new Caretaker music, the more personal Leyland Kirby stuff along with some straight electronic work too. It’s great really to hop from one thing to another and also fall through into cracks where nothing seems to fit anywhere. Every day working on things, it’s incredible I am able to do this. Support for what I have been doing has been strong and has enabled me to just hide and work. I’m really thankful for that support as I survive purely off sales of my works.

The sounds of Watching Dead Empires In Decay are somewhat different from your 2008 dark ambient journey across the Northern English moorland” titled Bleaklow. But what is the connection between these two albums five years apart?
The connection is place, the very first album which came out in 1998 was about the dark feeling surrounding northern moors when I grew up. The moors murders were still fresh in people’s minds, so as well as having a bleak beauty it was a place of darkness and mystery. The on going investigation in trying to locate the missing body of Keith Bennett saw regular excavations up there through my childhood. The Granada news of the time was this endless loop of misery. ‘Bleaklow’ was about a similar place, again trying to capture that mood as it is barren up there, mining it further, going deeper. ‘Dead Empires’ to me carries on the place theme. All along I had in mind the title of the album, the cover art then placed it. You can look at it in two ways, the empire could be the flats crumbling. That kind of living in fear in flats stinking of piss and covered in graffiti was its own warped empire and horror. Or you can look at a bigger picture, areas in decay where we get a glimpse of a dying empire whose best days are long gone. Darkness though abounds through all three of the albums. I can only listen to them on grey days. You’re not going to be inviting the girls over on a Sunny day and playing those releases.

And may I ask you about the moniker? I know that The Caretaker had its roots in Stephen King’s “The Shining” (btw, have you read Doctor Sleep yet?) — does The Stranger by any chance come from the same titled novel by Albert Camus?
I chose that name back in 1998 as I felt it fitted the mood of the first release and a rudimentary (in those days) check revealed nobody else had taken it to my knowledge. It fitted the mood though, it’s a shadowy anonymous name which still seems to fit the overall ethos.

So when you’re working on a piece of music – do you already have in mind a particular moniker under which it will be released? Is that choice associated with mood, instrumentation, or something else?
It really depends. Most days I work on music when inspired and only when inspired, from what’s created I have no idea what might be used down the line. What can be perceived as insignificant recordings at the time take on great relevance when time passes, this I am learning more and more – the value of waiting. Everything is painstakingly archived. Usually an idea at a random point will pop into my mind which piques interest and then I go through the archive to see what might fit. I worked intensely though on the Stranger album, in the end it was crazy putting it together as I had around 150-200 tracks to choose from. It was like trying to piece together a jigsaw with a vague idea of how the final picture should look. I went with flow, there’s a flow to it. It’s leading somewhere, possibly round darker corners, possibly into decay itself.

Congratulations on getting signed on Modern Love – their releases have been outstanding throughout the years. How did the release of Watching Dead Empires In Decay come about?
It seemed like a natural and perfect fit for the album. I could have released it on my label but Modern Love have been big supporters of my work and I know Miles and Sean (Demdike Stare) really well and have met Andy Stott a few times who has been producing a lot of solid work of late. Shlom who runs the label has always been very supportive of my work for many years. Maybe Sean too was keen to see me on there as he’s always desperate for me to play live with Demdike and I guess I qualify for a Modern Love showcase now. I think he appreciates the chaos I can randomly bring to situations. A lot of musicians are in/out when it comes to shows, but for me I always like to experience a little more. You know stay around cities and get a feeling about a place, find the local chaos bars and see what happens. My time in New York with Sean and Miles was always one of the many highlights of hitting the road. I last saw them in Innsbruck where I had been out with the locals for three days non stop when they arrived, great times, fabulous memories you don’t get if you just fly in and fly out. I took a whole bar in Innsbruck to my show which meant a lot as it wasn’t their music at all.

What sort of instruments did you use on the production of the album? It sounds as if there are quite a few analog sounds and plenty of time drift in the rhythms…
There was a lot of experimentation which went on, layering of sounds both digital and analogue. I have been reading a lot recently how so many musicians feel overawed by choice so are regressing back to more analogue set ups where it’s easier to focus. I am the opposite, I love choice, the more choice I have the more inspired I am. Right now it’s incredible. I don’t think I’ve ever been more excited about possibilities and directions where sound can go. Every time I do work it’s a new road. Lots of chance is involved and I marry that with experience I have built up now over many years. I have a sixth sense of what might work and a lot of work goes into being able to lay my hands on the right sounds which compliment each other. Decisions are made quickly and if something doesn’t work then there are other options. I read a lot of reviews of the album and a lot of people were trying to second guess the sound sources. Nobody really got close to understanding about what was used to be honest which is great. The sources were varied but always composed. Overall I hope it makes some kind of sense when you go from start to finish. Not every musician has this uniform mentality that we need to be limited with choice to make significant works.

Tell us about the artwork on the album. I believe that’s Guy Denning who you also selected for Deleted Scenes / Forgotten Dreams, as well as Persistent Repetition Of Phrases.
Guy is an amazing person. My friend Jono in Bristol introduced me to his work and Guy was into my V/Vm work at the time. He’s a very dedicated person who for many years was working in the shadows and barely surviving. I used two of his paintings on Caretaker releases and around that time he got some interest from a gallery in London and relocated to France. I couldn’t be happier for him because he’s in a great position now where he can just work on his art with less financial pressure. Interest is very high in what he’s doing which is well deserved. I decided to see if I could use one of Guy’s works for ‘Dead Empires’ as I wanted a different look than Ivan Seal’s paintings which have become synonymous with recent works on my own label. I loved the feeling from the image I chose and the overall sound of the finished work was inspired by this and my surroundings here in Krakow. I recently watched ‘Dekalog’ again and the cover art looks like it could be lifted from a still from that series of short films. Grim and grey, always I have a lot of time for grim and grey vistas.

What other projects are you working on at the moment? Any scores or soundtracks? I’m also hoping to get graced with more music in 2014 by The Caretaker 🙂
A release of mine has just come out on Apollo (Via R&S) which closes a circle for me that opened in 1989 when I was introduced to the label by Acid Alan via a mix tape he gave me. It’s been great to speak with Renaat who for a long time was a big inspiration to me and great to dedicate a record to Alan too. The final part of Intrigue & Stuff has also been mastered and will be cut soon, to my ears it’s the strongest part and i’m very excited for its release. There are some film possibilities but nothing is confirmed. I know a lot of people are waiting for more Caretaker work, I did some initial experiments last year but have not revisited them for the last twelve months so it’s unlikely anything will come out this year. The response ”an empty bliss” got has really been incredible and interest grows daily still which is incredible as it’s crept out there via word of mouth. I can’t stand really to push things or shout about my work. It’s been over two years since I sent an email to my mailing list.

I will say that I am working on an album which I would intend to be a proper follow on from ‘Sadly, the future’ that is my main focus for the next months now.

There will also be some re-issues of some of my older works for the first time on vinyl including a selection from my long deleted ‘Death of Rave’ project. A lot of people request that constantly from me. The original project was vast, this extremely truncated and limited selection which will appear I have been falling asleep to for the past two years and it’s been re-mastered now which gives it an extra depth. Flashbacks. Ivan Seal has done an amazing cover for it, I’m very excited to be sharing it soon.

Other than that it’s endless audio work in here and trying to survive, sadly due to a longstanding inner ear problem I have been unable to play shows now for nearly 18 months, you would cry if I listed all the offers I have had which have had to be turned down. You know really amazing places all over the World. It’s horrible because you work hard to get these offers and as I still refuse to have an agent or manager it’s even more of an achievement to get such offers. I flip that positively though because not travelling gives me so much time to work and go deeper and with all the possibilities I’m more motivated than ever right now. It’s amazing having no limits and endless options. Not knowing where we are going but being open to all options is the true beauty in life.