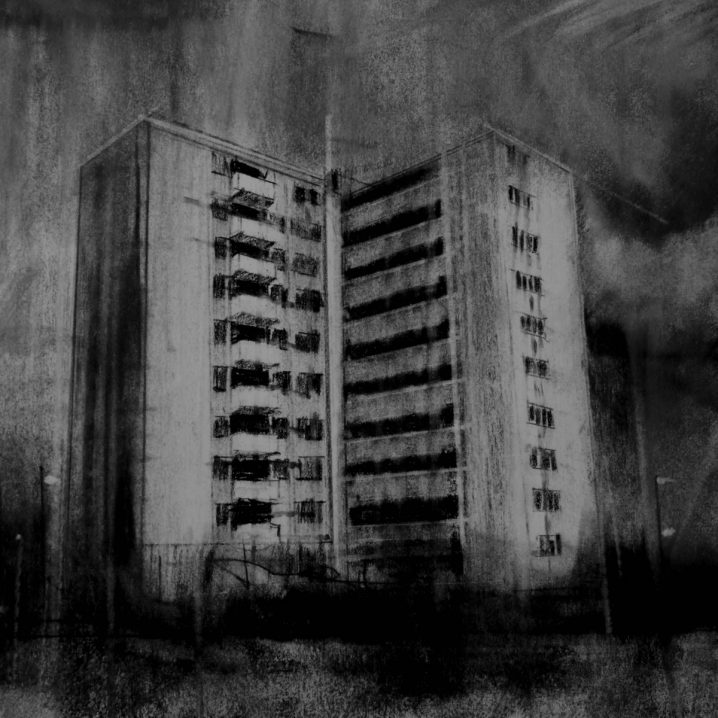 Listen… You could almost hear them walking on your grave… Bodies dragged across the future, smeared with blood and empty dreams… Listen… You could almost hear them screaming… Suffocating in the world that they together built, wrapped in silence that will still remain forever… long after they’re gone… They are all zombies now… Buildings rusting, curtains crumbling, children reaching, for the glow of digital and social decay… We have built this real nightmare… and together we will drown…

Words are nothing when compared to the feelings that this music brings. Dark shuffling rhythms, muffled fabrics, sinister asphyxiation. Sounds resisting all identification, yet triggering some recall from within. Sonic particles harvested from scraping, fondling, and collapsing textures. Passages of flashbacks, turmoil, and unease. These are the sounds of The Stranger, yet another pseudonym of James Leyland Kirby, for whom I have sung many praises in the past. In the last few years, Kirby explored and subsequently released music inspired by the dusty 78 RPM records, under his The Caretaker alias. Those familiar with the project will no doubt treasure the records on his very own History Always Favours The Winners label. Among those, An Empty Bliss Beyond This World (2011) and Patience (After Sebald) (2012) are my all-time favorites. But for this release, Kirby is picked up by Modern Love – home to many great ‘hauntology’ masters, such as Demdike Stare, Andy Stott, and Vatican Shadow.

It’s a dream album for the label: perhaps the most ambitious of Kirby’s career so far. It’s complex, singular, enigmatic, percussive, dark, and you just can’t work out how it was constructed […] It’s stark and unsettling, haunted, even troubling – but often just beautiful.

The music is without a doubt a little eerie, cinematic, and drab. But knowing Kirby’s fascination with ghostly melodies and their relation to the memories of the past (real and abstract) adds a layer of somber nostalgia to the album. Watching Dead Empires In Decay is a tribute to the complex aspects of humanity, through every little action on this plane. Perhaps this apocalyptic interpretation of The Stranger’s shadowy stroll through the culture of decline is just my imagination. But it is the imagery that is triggered by his music. A triumph for the label! A hidden gem for those ‘in the know’!! Guaranteed to be on many [and mine] Best of 2013 lists!!! Highly recommended!