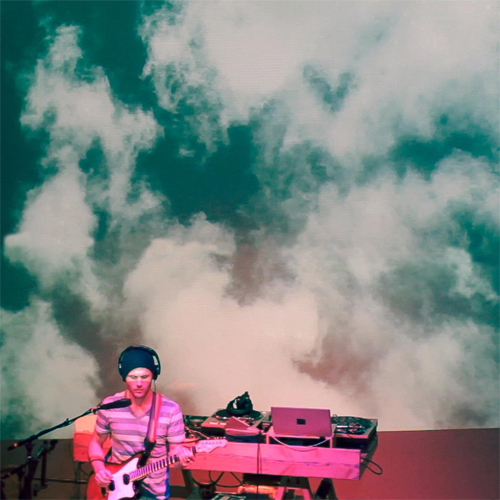 It’s been about five years since your last collaboration with Ryuichi Sakamoto. What prompted you to revisit this partnership again?
We wanted to try something different from the last album, so we took our time. There’s no rush. Ryuichi sent me files and then I’d play with them. From the very first time I heard the recordings he sent me to the the way I hear them now, they have completely transformed. Or rather, me and my ears have completely transformed. So I’m really happy we didn’t rush it. Creating is an endless process of growth.

You have mentioned the pieces that Sakamoto sent you to work with. Talk a bit about the production process behind the album.
Sakamoto would send me piano recordings, I’d improvise with them, make some edits and mixes and then we’d meet up in person and talk about how it felt. At first we wanted to improvise live like we did for Ocean Fire but Sakamoto’s piano was in storage during the times where we could make that happen. And it’s great that we didn’t. We played live together for Ocean Fire and tried another process here, which for me was more of a challenge on a lot of levels. I do everything live, every time I work I’m listening to the sounds and process and what I need to complete. It’s very improvised within constraints I’ve designed. So for this album the piano was recorded and it could go any direction. Sakamoto trusted me to steer it all. At first I was wondering how I was going to glue together these chords. But then I let it go, sat down and just played along with it as I always do and the structure emerged like it always does.

There’s a great deal of deep thumping bass on Ancient Future which reminds me of a heartbeat weaved in between Sakamoto’s piano notes and your guitar. What is the overall atmospheric environment that you attempted to capture?
Oh cool I’m glad you hear it like that. I’m really happy with how Ryan Kleeman and I mixed this record. All sound resonates our bodies, and moves that energy. I love to use bass to ground the space and also loosen and release things. That probably reads hilarious, bass making you shit or something. But really, it’s kind of like that. Vibrate the shit out. It’s like physical exercise. Tai Chi. Music resonates our being, makes it sing with the intention of the sound. That’s the power of music, the resonant intention. We all feel it from the music we love.

I’ve seen you perform on numerous occasions. Your almost ritualistic approach to live shows hints that your body is an extension of your instrument, which is in turn an extension of sound that emanates from within. Describe your spiritual connection with music which is so obviously evident from everything that you do.
All is connected to all and everything is continuously vibrating. Sound, image, and process and the audience and myself are all together in that moment. It’s a unified connection. Energy and body and thought. I want to create an experience where the audience has a moment where they can be relaxed and present, that’s what it’s all about. It’s so fun. It can take on many different forms, but in the end that’s the intention. Let’s create some peace together.

And what about Ancient Future itself? What is the deeper meaning behind individual tracks and the album as whole?
Ancient Future is about acceptance and completion. It’s designed to be listened to in one sitting all the way through. It begins with resistance, and challenges and then coming into affinity with path information, self-love, letting go and relaxing. Everyone has their own stories playing in their head, what should be, what could have been, what is happening. We are setting the space for a journey to occur and I hope people people bring their own stories to the music.

You talk about cycles of creation, acceptance and completion within your work. How do you see your musical career revolve within the same cycles and is it something that you are consciously aware of at all times?
Everything I create is the result of a process of growth, discovering new things, completing ideas and visions and dreams that I have had. Things that need to get done. Through this music I’m always learning so much about myself, this universe, my relationships to everything. I’m always expressing whatever I need to express and through that communication I understand deeper.

What are you working on these days?
I’m working on a ton of stuff. I’m working on a two solo albums, a short film that goes along with one of them, creating the music for a dance performance titled 生生流転 Shō Jō Ru Ten, working on an ambisonic system, setting up Overlap events, teaching a grad sound + image course at CCA, teaching grad composition and sound design at Goucher, teaching mixing at the Art Institute in SF, new CREATE episodes and other video tutorials, a bunch of collaborations, new photo prints, setting up the new Overlap mixing studio, helping along an urban garden in SF, Tai Chi Chuan, and getting ready for a show at the California Academy of Science on July 18th in the aquarium.

Be sure to read Headphone Commute review of Ancient Future