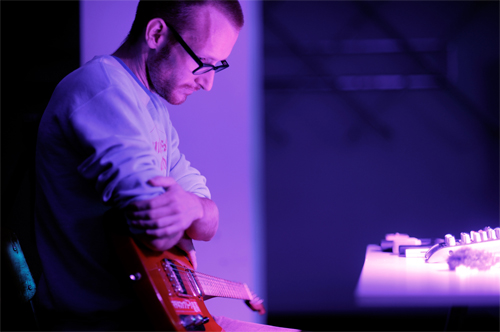 Hey Rutger, how are you? Tell us, what did you do this past weekend?
On Saturday (which was also my birthday), I flew from Innsbruck to Amsterdam. I performed in Innsbruck, sharing the bill with Nicola Ratti, who gave a fantastic performance. On Sunday, I didn’t do much besides catching up on e-mails, and reading.

I have been covering your releases for over five years now. You’ve even submitted a Sound Postcard and a Mix to Headphone Commute. Yet this is our very first official interview. So let’s start at the beginning. Where does the name ‘machinefabriek’ comes from?
Machinefabriek means, as you might guess, ‘machine factory’. I passed one every time I went for groceries, in Arnhem, the last city I lived in. I was thinking of a name to use, and that one seemed the most obvious. It’s a word that looks nice typographically, sounds nice, and I also like the meaning… the idea that it’s a factory that makes things for making things.

I’m always praising your seemingly limitless catalog. Where do you find the time to record so much material?
I like to work fast, as I’m a bit restless. So I don’t spend a long time on a record, though I’m very focused in the process. I try to avoid over-doing things, and to keep things spontaneous. It’s all very ‘in the moment’. This way of working allows me to produce a lot.

Since various releases are different in concept, do you work on more than one project at a time? How do you manage that?
Though there’s always plans or commissions waiting to be executed, I try to work as much as possible on one thing at a time. Focusing on one thing at the time works way better for me. When something is done, my head gets more organised, and there’s room for the next project. If I do too much at the same time, it’s harder to get the right concentration.

Tell us a bit about your tour with Will Long of Celer.
That was such a blast! We hadn’t met before, so I wasn’t sure what to expect. Of course I knew his music, but our concerts were the opposite of these long stretched drones. The performances were all hundred percent improvised, and we didn’t really talk about what to do. Each evening we just started, and surprised each other. It was all over the place, restless, with weird samples and such. Every concert was stranger then the one before, as if we were pushing to see how far we could go. At a few concerts, I couldn’t help but start laughing. I’m glad it’s all well documented in the post card set we released.

Besides being a musician, you’re also a graphic artist. How do the two artistic branches overlap in your work?
First of all, I don’t do much graphic work anymore. Only things I do is my own sleeves, and some for friends. Besides that, both music and design are of course about composition, and in both I try to combine a certain minimalism with an eye for detail. In that sense they are quite alike, style wise.

Mostly, when working on an album, I’m working on the artwork simultaneously. In the process, the sleeve and the music really gets connected. So the sleeves are very important to me. I like to hold them, to have that physical contact. It’s old-fashioned, but for me that still does a lot more than download, which I find hard to really fall in love with.

Talk about your collaborations. What is the contrast between working solo or with another musician? How do you go about working on a particular project?
It depends per project. But what every collaboration has in common, is that they can push me to make decisions that I wouldn’t make in my solo work. Simply because I have to react on sounds that are not coming from myself. I really like this processing, and I learn a lot from it.

For example, the album I just finished with Philippe Petit. We made it very fast, by swapping files back and forth. Philippe would send me a basic track, and I’ll add extra layers and sent it back. That was repeated a few times until we both felt happy about it. Although file sharing might not seem as the best way to get spontaneous results, but I think we succeeded. It’s an album that’s totally different from the normally more minimalistic and purist approach I try to apply on my solo works.

Another way of working is by actually meeting in person and improvising on the spot, like i recently did with Jaap Blonk, and what happens when Piiptsjilling makes music. It’s truly magic to be together and communicate through sound. If it works well, it’s such a great feeling. It has everything to do with atmosphere, and listening. The downside of it is that sometimes there’s so much recorded material, that it’s hard to pick the best moments. But well, that’s a luxury problem.

What about video installations and sound sculptures? What is the approach that you take for producing these pieces relative to your studio work?
I’m especially interested in doing installations, because it’s such a different listening experience as a performance. The sound plays continuously, and the audience comes and goes when they please, while at a concert, people are seated, and I spend half an hour to tell a story. An installation doesn’t have the dramatic and theatric element in it. It’s more about the sound itself, because the performer isn’t there. It more directly gets into a dialogue with the environment, also because a lot of the times the installation is site specific. In that case, I think of the sound as a natural element within the environment, blending in, as if it’s not artificial.

When doing music for film, the most important aspect is to keep room for the images to breathe. And the other way around of course. The music shouldn’t become some background noise, but the images shouldn’t feel as some screen saver. It’s a delicate balance.

Do you ever find the time to listen to the latest releases? If so, who are your favorite contemporary artists?
I buy way too many CDs. It’s impossible, but I don’t want to miss anything that seems exciting. Lately, I’m really enjoying the output of Entr’acte. Such a great label, with equally great sleeves. One of my favorite artists on there is Helena Gough. And Giueppe Ielasi, but I’ve been following him for a longer time, he’s been quite influential for me.

Do you think you will ever slow down in your output? What are some of the most exciting upcoming releases from Machinefabriek?
Not sure. I don’t really look in the future, but perhaps I get involved in bigger art projects that take more time. That might actually be nice. But I suppose the restlessness doesn’t disappear… so I can’t promise anything.

As for exciting releases… there’s the new 7-inch with Celer, which I’m super happy about. And a forthcoming album I’m mighty proud of is ‘Secret Photographs’, a soundtrack for a film by Mike Hoolboom, that will be released on Important.

Be sure to read Headphone Commute’s Sound Bytes : Machinefabriek Special